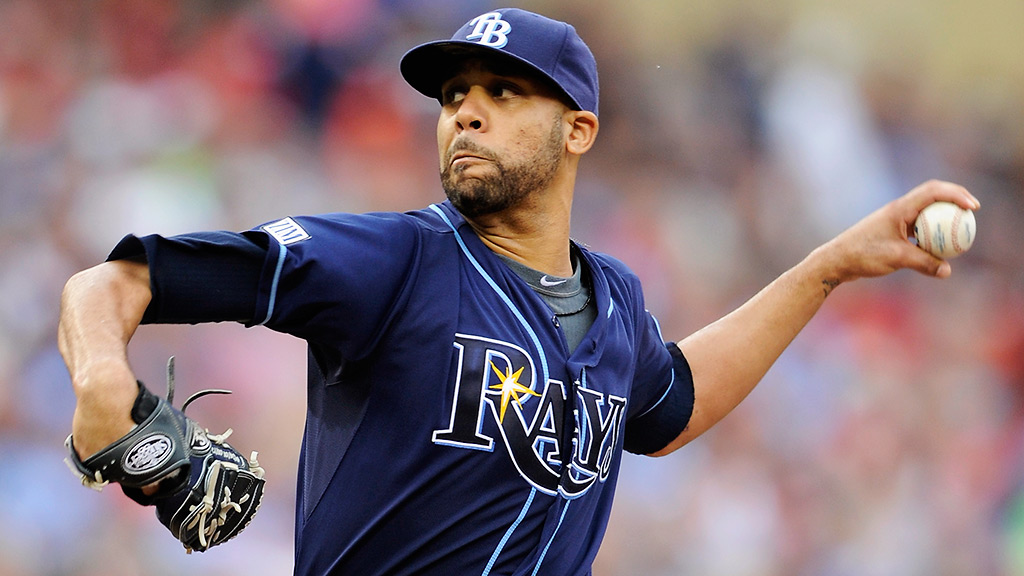 Well, so much for a quiet 2014 trade deadline. Following this morning’s Oakland-Boston blockbuster, the Detroit Tigers capped one of the wildest deadline days in history with an 11th-hour deal for David Price, the most sought-after commodity on the market. The three-team swap between Detroit, Tampa Bay, and Seattle sent pitcher Drew Smyly and infield prospects Nick Franklin and Willy Adames to the Rays; outfielder Austin Jackson to the M’s; and Price to the Tigers, who now have the last three American League Cy Young winners in the same starting rotation.

The Tigers began the day sitting more comfortably than any other contender, with a five-game lead over the second-place Royals and no AL Central foe looking like a real threat. Yet they found a way to acquire Price anyway, continuing a recent pattern for owner Mike Ilitch and aggressive GM Dave Dombrowski: doing whatever it takes to position the team for a World Series run.

While overspending for Prince Fielder and throwing gobs of money at Miguel Cabrera and Justin Verlander sooner than they needed to pointed to a “shoot first, ask questions later” team-building mentality, it’s hard to find fault with the logic behind reeling in Price. After a rough start to the 2014 season, Price has dominated since mid-May, flashing a 2.46 ERA and 131-to-17 strikeout-to-walk ratio over his last 15 starts and posting career-best whiff rates with his changeup, cutter, and four-seam fastball. The Tigers offer less defensive support and a less friendly home ballpark for pitchers than the Rays, but Price misses bats so often that those circumstantial downgrades hardly figure to matter.

Simply put, Price makes the Tigers’ rotation the envy of the bulk of the baseball world. While Detroit was going to make the postseason with or without Price, he’ll give them an undeniable edge in October. Just think about the ripple effect of adding one of baseball’s best arms to an already loaded starting five: The Tigers will need only four starters during the playoffs, and identifying the odd man out will fall into the “good problems to have” category. Max Scherzer and Price are clearly the team’s top two starters at this point, with Scherzer quietly delivering another big year after last season’s Cy Young–winning campaign; Anibal Sanchez, meanwhile, has developed into one of the best pitchers in the league, just below the elite tier, and currently ranks among the MLB leaders in Fielding Independent Pitching; and Rick Porcello has become one of the steadiest starters in the league, hovering around a 50 percent ground ball rate again this year and remaining stingy with walks while ranking first on Detroit’s staff with 6.2 innings pitched per start.

Notice which player I didn’t just list? Acquiring Price makes the Tigers’ rotation so strong that they’ll be able to consider an intriguing option come October: using Verlander out of the bullpen. Two years ago, the San Francisco Giants did the previously unthinkable during their World Series run, converting two-time Cy Young winner Tim Lincecum into a reliever. By that point, everyone knew that Lincecum was no longer the guy who could terrorize opponents for eight or nine innings at a time, firing 97-mph fastballs and gravity-defying breaking balls past helpless batters. Well, here’s the beauty of pitching in relief: Compared to starting, it’s pretty damn easy. There’s a reason most of the greatest relief pitchers of all time (Dennis Eckersley, Eric Gagne, Billy Wagner, and, of course, the great Mariano Rivera) were converted starters: Tossing 15 or 20 pitches per outing instead of 100 allows a pitcher to throw his hardest fastball and nastiest secondary stuff, because he doesn’t have to worry about conserving himself. Like Lincecum, Verlander is no longer the shutdown flamethrower he was during his own Cy Young–winning heyday, but watching him unleash his fastball and hammer slider at max effort for 25 or 30 pitches would still be a spectacular sight.

An equally spectacular potential sight: watching the loaded Tigers and A’s battle it out in the postseason. Adding Price does far more than improve the Tigers’ rotation; it restores balance to an American League arms race that seemed to be tilting more and more in Oakland’s favor. The A’s own baseball’s best record and run differential, and made the two biggest trades of the year prior to the Price salvo, grabbing Jeff Samardzija and Jason Hammel from the Cubs in early July and Jon Lester from the Red Sox this morning. With Price, the Tigers can at least equal and possibly surpass the A’s rotation strength, even though Detroit’s defense still lags well behind Oakland’s. And while Oakland had to settle for a 2014 rental with Lester, the Tigers will also have Price next season; he’ll likely cost them around $20 million after arbitration, but they’re one of the few organizations that won’t balk at that figure.

And unlike the A’s, the Tigers don’t have to worry about threats within their own division. Oakland already had to worry about the AL’s other heavyweight, the Angels, and now it has to worry a little bit more about the Mariners, who just got stronger right along with the Tigers. The Mariners made the simplest transaction of the three teams involved in the Price deal, sending Franklin to the Rays and getting Jackson from the Tigers in return.

Jackson carries a shiny reputation thanks to his second-place Rookie of the Year finish in 2010 and his huge campaign in 2012, when he batted .300/.377/.479, scored 103 runs, and banged out 55 extra-base hits. He hasn’t been that guy this season, hitting a more modest .273/.332/.398 (one percent better than league average by wRC+) while playing so-so defense, but he’ll still give the Mariners a considerable bump at a position of great need. Before acquiring Jackson, Seattle’s center-field options were Endy Chavez and James Jones. Adding Jackson — and, to a lesser extent, adding Chris Denorfia from the Padres — suddenly gives the Mariners an outfield with real depth, lefty-righty balance, and actual hitting ability. The Mariners had been rumored to be pursuing Price since this offseason, and while they obviously failed to land him or any other frontline starter, they addressed their most glaring weakness by adding outfield help, boosting their AL wild-card hopes in the process.

Bizarrely, the Rays are the team that seems to have come up short, with industry consensus saying they failed to get enough for Price. The rumor mill had Tampa Bay potentially acquiring impact young players like Oscar Taveras and Shelby Miller from the Cardinals, or some combination of Corey Seager, Joc Pederson, and/or Julio Urias from the Dodgers. Smyly and Franklin are both young, cheap players with upside who will be under team control through 2018 and 2019, respectively, but scouts don’t consider either a future star: Smyly has shown promise but is sitting on a 4.08 FIP in his first go-round as a full-time major league starting pitcher, while Franklin has put up impressive numbers in the minors (including in the offense-friendly Pacific Coast League) only to (so far) struggle in the majors, hitting just .214/.291/.358 in his first 119 big league games.

Adames, meanwhile, was considered arguably the best prospect in the Tigers system. However, that’s not saying much, since Detroit has obliterated its minor league depth by trading away so many other prospects in recent seasons. Adames has hit .269/.346/.428 in the Midwest League this year, impressive results for an 18-year-old player, but he still has a long way to go before he can start to sniff The Show, and opinions are split on whether he’ll be able to handle the rigors of playing shortstop at the highest level. At least we know he’s got some personality:

Well, maybe the Rays know something we don’t. GM Andrew Friedman and the front office have repeatedly surprised us with their ability to find valuable contributors in unlikely places, and it’s certainly possible that Smyly, Franklin, or Adames — and maybe even all three — could perform better in the future than we might expect based on their track records and pedigrees.

Still, it’s hard to get around the facts: The hottest team in baseball, and the one with a chance to pull off one of the greatest in-season comebacks in history, just traded away its best pitcher for a bundle that’s anything but a guarantee. I’m not a touchy-feely mind reader, but dealing Price certainly seems like the kind of move that will not only hurt the Rays’ roster and playoff chances in the short term, but also risk damaging the psyches of Rays fans and Price’s former teammates.

This is the razor’s edge on which the tiny-revenue Rays must continually operate, trading away star player after star player while assembling younger and younger talent in the hopes of finding the right window for a playoff run. It has worked in four of the past six seasons, and the Rays might still have an outside shot of pulling it off this year. But they’ll likely be staring up at Price and the Tigers if they do.

The Desolation of Southampton