MLB Overnight: The Giants Best the Cardinals in the NLCS to Keep Their Even-Year World Series Dreams Alive 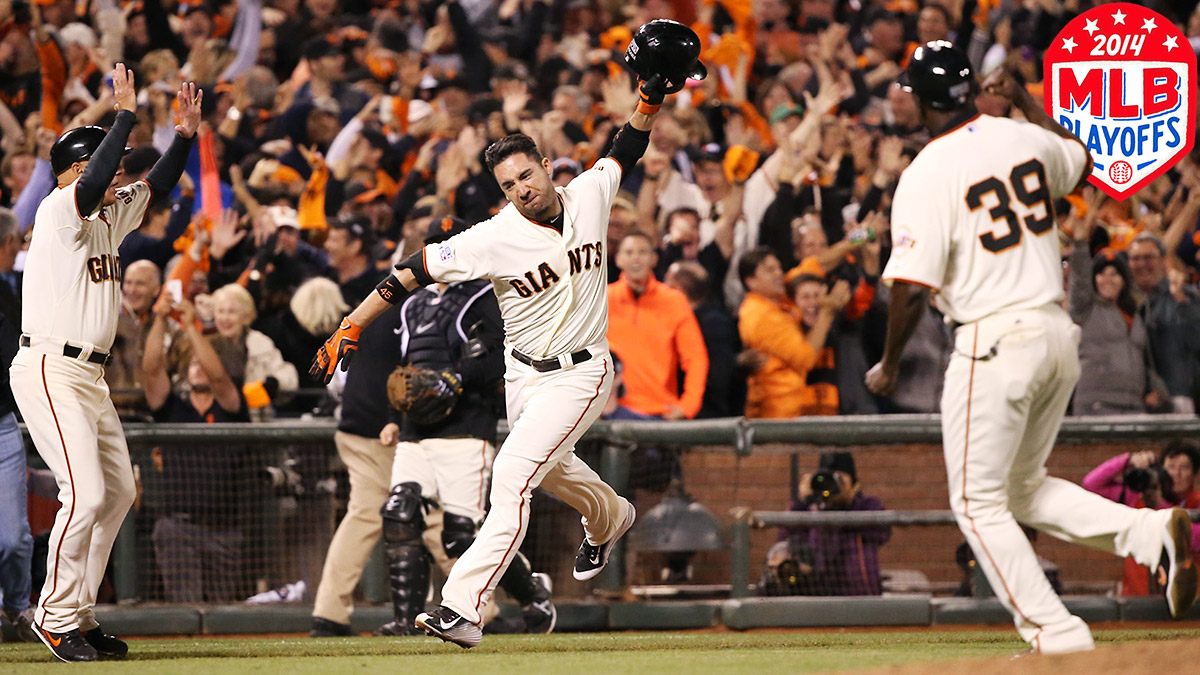 Joe Panik and Tony Cruz both homered Thursday night. Adam Wainwright pitched very well for seven innings, but did so by pitching backward, throwing 34 curveballs in 97 pitches.1 The previously infallible Madison Bumgarner left the game trailing 3-2. And then Travis Ishikawa, a quad-A first baseman who’d played 32.2 innings in the outfield in his major league career before the playoffs started, hit the pennant-winning walk-off home run off Michael Wacha, who was being fitted for his vestments and miter as the Pope of Clutchness this time last year.

I bring all of that up to drive home the point that before you start wagging fingers at players or at Mike Matheny’s bullpen management in the wake of the Giants’ decisive, 6-3 Game 5 NLCS win, remember that October baseball trends toward weirdness.

But let’s talk about Matheny’s bullpen management anyway. And let’s get one thing out of the way: It was absolutely the right call to take Wainwright out after the seventh inning.

Wainwright had struggled his last two times out, either because of a mechanical issue or a physical ailment. Better to pull the plug an inning too early than to wait for one of those issues to pop up again, which Matheny knows full well after winning the NLDS because Don Mattingly left a tiring Clayton Kershaw in the game an inning too long.

Also, Wainwright would have been facing the top of the Giants’ lineup a fourth time had he stayed in the game, and the times-through-the-order penalty tells us that the more times a pitcher turns over the lineup, the better batters hit.

Besides, the St. Louis bullpen had just six outs to get, and up a run in the bottom of the eighth, the Cardinals were about a 3-to-1 favorite to win. Why not have their best two relievers bring the ship home? Matheny sent Pat Neshek out for the eighth and had Trevor Rosenthal up in the bullpen to go for a multi-inning save if Neshek got into trouble, which is exactly what a manager should do in that situation.

The problem is, Neshek didn’t get into trouble — Morse plastered him immediately. And even that homer had a little bit of the playoff crazies to it. You see, Morse has enough power to light up, well, San Francisco, but he’s a big, swing-and-miss righty coming in cold against a same-handed sidearmer with a 2.37 FIP. And even though Neshek hung the slider Morse hit out, Morse was so obviously swinging from the heels that his helmet nearly fell off his head, and I’m not convinced he was even looking at the ball when he made contact.

Nevertheless, he hit it out, and when the Giants came up again an inning later, Wacha — not Rosenthal — came out of the bullpen. Hey, why not Rosenthal? To answer, let’s do one of those seven-pass pool dunks you’ll find on YouTube with Jonah Keri and veteran St. Louis Post-Dispatch columnist Bernie Miklasz.

"can't" RT @miklasz Matheny, when asked about not using Rosenthal in 9th: "We can't bring him in, in tie-game situation. We're on the road.”

OK, this is where I get off the bus. On the one hand, starters’ stuff tends to play up out of the bullpen. On the other hand, Wacha hadn’t pitched out of the bullpen since August 28, 2013, and hadn’t pitched in any game in 20 days, in large part because he was recovering from injury. In fact, as Wacha threw the first pitch of the most important inning of the Cardinals’ season, Joe Buck was talking about the shoulder injury we weren’t sure Wacha was fully back from.

Sure enough, Wacha was fastball-reliant and wild, and as Ishikawa came to the plate, Harold Reynolds and Tom Verducci wondered aloud whether Wacha had been thrown into an unwinnable situation, and if the Cardinals would be better served going to another pitcher. That’s what we in the writing business call foreshadowing.

And we all know how it ended.

Did the Cardinals lose the series by handing it to Wacha in the ninth? Sure. That, and the throwing errors that lost Games 3 and 4, plus the injuries that took Yadier Molina out of the series and Wacha out of the rotation in the first place. We know better at this point than to blame one player or one decision.

Playoff baseball is the process of a team slowly tying its own noose, one strand at a time, over the course of a week or more. The tiniest decisions, bounces, lapses in concentration, umpire’s decisions, and changes in barometric pressure can determine who makes the World Series, and we won’t know how or why it happened until it’s all over. And sometimes not even then.