Madison Bumgarner and the Frenetic Zeros 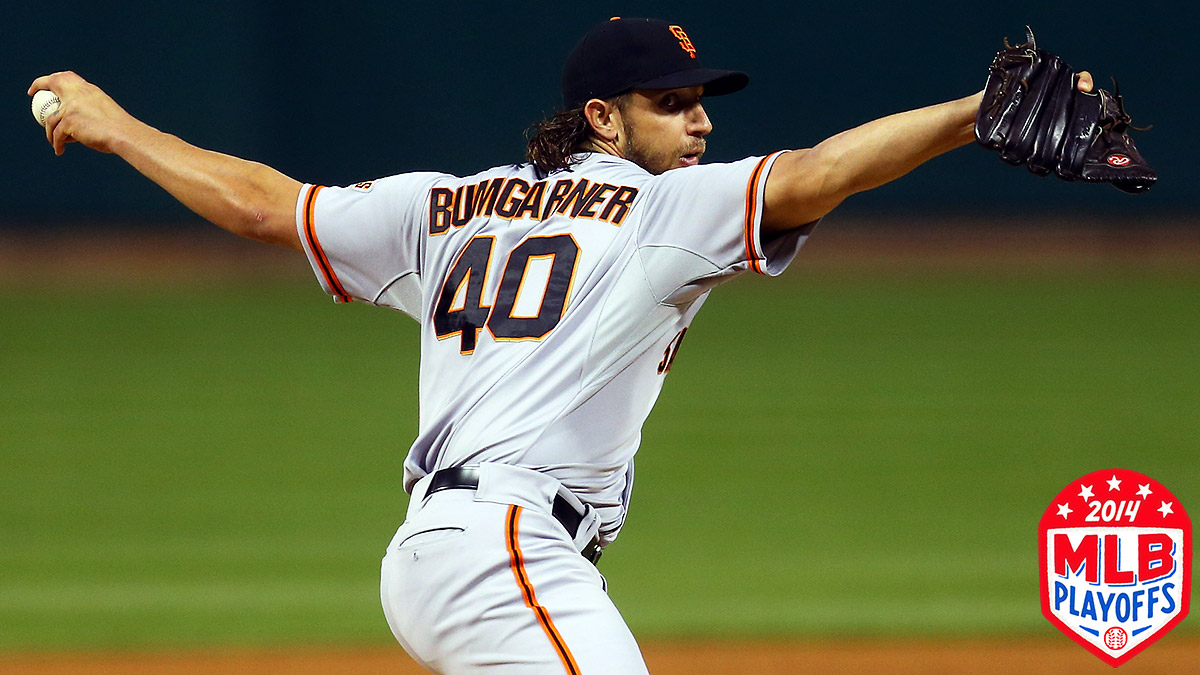 There’s a long-running sports tradition in which we tear down the best player by qualifying our superlatives in order to exalt some great but lesser individual. You’ve all heard it: “Sidney Crosby is the best player in the NHL, but if I had one player to start a team with, I’d choose Jonathan Toews.” Sometimes, we talk about hypothetical discussions — “We all know Mike Trout is the best player in the AL, but Alex Gordon should be in the conversation” — leaving unexplained why we’d even bother having the conversation in the first place when Trout is so clearly superior. And then there’s my favorite: “If I had one game to win, I’d have [anyone other than Peyton Manning, who is objectively the best football player ever to walk the face of the earth] as my quarterback.”

It’s almost not OK to praise a player as a worthy recipient of down-ballot MVP votes and yet stop short of nominating him for the blue ribbon. Madison Bumgarner, who takes the mound tonight for the Giants in tonight’s potentially decisive Game 5 against the Cardinals, is a victim of this rhetorical trick: He’s got a top-10 Cy Young finish and two World Series rings in the bag already, yet we can’t call him the best pitcher in the NL, or the best left-handed pitcher in the NL, or even the best left-handed pitcher in the NL West, because Clayton Kershaw exists and follows Bumgarner through each qualifier like an affable, neck-bearded poltergeist. Because Bumgarner broke in as the Marty Bystrom of the 2010 Giants, behind Tim Lincecum (who already had two Cy Young awards) and Matt Cain (who would go on to get the big contract and throw a perfect game), he only recently became the best pitcher on his own team. (“I know how you feel, pal,” says Cole Hamels.)

All of our postseason coverage!
The truth is that even though Bumgarner hasn’t done anything particularly surprising this postseason, the past two weeks have been something of a coming-out party for him. Any team that wins three World Series, even over as short a span as the Giants are trying to, will have significant roster turnover. Bumgarner has been a constant for the Giants over the past five years.

After earning a cup of coffee in 2009, Bumgarner joined the big league club for good midway through 2010, played a key role in the Giants’ title run that year, and has pitched four full major league seasons since. In that time, he’s been remarkably reliable, registering at least 31 starts and 200 innings in each of those seasons, as well as a league-average or better ERA+. And when Lincecum went in the tank in 2012 and then Cain followed a year later, Bumgarner stepped into the void.

It seems like the Giants have enjoyed an uninterrupted streak of excellent starting pitching since 2010, but that’s not the case. In 2012, things got so bad that Barry Zito made three playoff starts. That’s not only because Lincecum fell off a cliff, but also because Bumgarner experienced a troubling drop-off in velocity late in the season that hampered his effectiveness.

Bumgarner’s struggles late in 2012 were not unlike what happened to Kershaw and Hamels in 2009, when both got blasted in the playoffs. In response, both Hamels and Kershaw quit shaving and took the leap from potential to greatness. Hamels added a cutter and a curveball to his problematic two-pitch mix, while Kershaw cut his troublesome walk rate in half. Bumgarner did much the same thing, and today, he’s a pitcher who can hit the mid-90s well into his 240th inning of the year, with a perplexing five-pitch mix and a beard like he wants to play the bouzouki for Edward Sharpe and the Magnetic Zeros. Bumgarner is now more than just the kid at the end of the rotation: He’s a true no. 1 starter.

This fall, we’ve already seen Bumgarner throw a complete-game shutout in the win-or-go-home NL wild-card matchup in Pittsburgh. We’ve seen him pitch extremely well in a defeat against the Nationals, the NL’s best team (and frankly, it was Bumgarner’s defense that let him down, not his pitching), then grind the St. Louis Cardinals to dust in Game 1 of the NLCS.

That last start was particularly notable, because it seemed like the Cardinals were going to need an act of Congress to overturn even a 2-0 deficit against Bumgarner. He’s throwing up zeros and stomping around the mound with the authority of a pitcher who aims to put a team on his back and drag them to the World Series.

Among the NL’s top pitchers, only Bumgarner and Adam Wainwright remain, and through two playoff starts, Wainwright looks like some combination of lost and hurt. Kershaw, Zack Greinke, Jordan Zimmermann, and Stephen Strasburg got sent home, and Hamels and Johnny Cueto never got close to making the postseason this year. I wouldn’t have listed Bumgarner on a hypothetical five-man Cy Young ballot at season’s end, but if I were so inclined, I could call him the king of a hypothetical postseason mountain. I could trot out arcane fun facts about how he hasn’t allowed a run on the road in a playoff game since his first-ever playoff start, way back in 2010. But that goes back to the kind of qualified, equivocating praise that ends up not meaning much in the end.

So I’ll say this: Bumgarner is a no. 1 starter by any reasonable standard — reliability, performance, or whether you’d feel good about having him start Game 1 of the World Series. And he’s been truly magnificent so far this postseason — good enough that he’s finally getting the credit he deserves.

‘The Finish Line: Landon Donovan,’ Episode 1: Soaking It In

It's Time for the NFL to Embrace the Tie Game