MLB Overnight, NLDS: The Giants Throw the Game Away, While the Cardinals Blast Their Way by L.A. 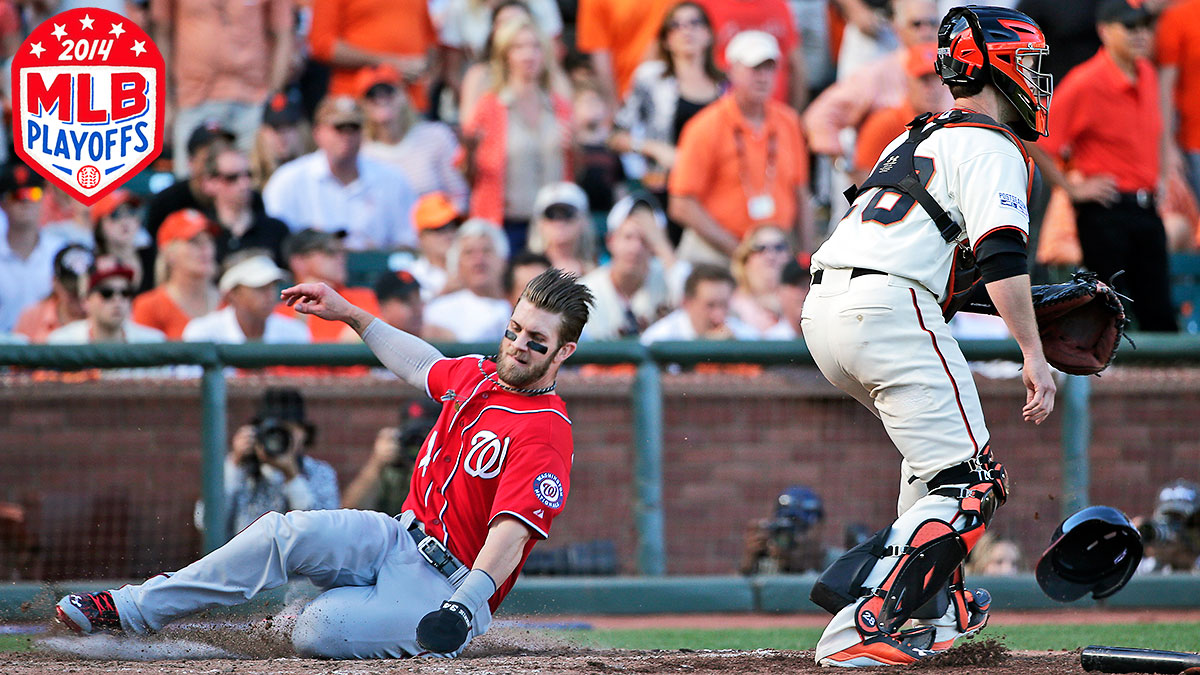 Playoff baseball has a delicate balance, particularly the kind of playoff baseball we’ve seen this year. Even a series that ends up 3-0 or 3-1 can be thrown entirely out of whack in an instant. A pitching change and a sudden cloudburst can lead to a home run that breaks an evenly played game wide open. Or a pitcher on a 22-inning playoff shutout streak can throw to the wrong base, causing Bryce Harper to suddenly round third, his helmet off and his hair rippling majestically in the wind like the plumage of a diving falcon. All of that and more happened Monday night.

We’ve all been there, standing over a plate of fries, holding a bottle of ketchup. Maybe you ran out of barbecue sauce, or maybe you asked the waitress for vinegar and she looked at you like you were from outer space. Either way, you’re holding that bottle, ready to turn it over your fries like the kind of barbarian who puts ketchup on food. But no amount of pouring or shaking gets a result. So you do like you learned and hit the bottle, right on the “57.” And your fries are suddenly drowned in viscous, red goo.

Last night, that’s what happened to the Nationals, who had gone 21 innings between runs over the course of two games, and who needed to end that streak against Madison Bumgarner. Between his gem in the wild-card game and his first six innings Monday, Bumgarner had extended his postseason scoreless streak to 22 innings, establishing himself as the Giants’ indomitable force, and the King of the Playoffs.

Washington’s offensive problems extended beyond Bumgarner: Through the first 33 innings of the series, the Nationals’ usually deep lineup had failed to scratch out any meaningful offense, totaling just three runs. Geggy Tah had more hits; the after-party for the Spring Formal at Bob Jones University had more scoring. The Nats might as well have been the target audience for the unsettling commercial we see three times per game, in which a blonde lady lies on her stomach and tells us about Viagra for a full minute without breaking eye contact.

Then, in the seventh inning, Bumgarner suddenly lost his command. Ian Desmond singled and Harper walked on five pitches. Then, Wilson Ramos bunted a 1-2 slider to the first-base side. (Why the Nats would want Ramos, a hitter with a career 104 wRC+ who hit cleanup 16 times this year and hasn’t put down a sacrifice bunt since 2011, is worth pondering.) Bumgarner fielded it and, perhaps frustrated that he’d failed to get Desmond out once, threw to third base instead of taking the sure out at first.

Desmond probably would have been safe regardless, but the throw wound up in San Francisco’s bullpen, and it took long enough for the Giants to get the ball back in that both Desmond and Harper scored. And all the ketchup started pouring out of the bottle. Asdrubal Cabrera singled Ramos in to make it 3-0, and in the top of the ninth, Harper nearly put a Jean Machi pitch in the drink to make it 4-0.

Those four runs count as an offensive outburst in this series, and they gave Washington life. Now, the Nats need to win Tuesday behind Gio Gonzalez to send it back home for a decisive Game 5. That’s not bad, considering that down 0-2 and facing Bumgarner on the road, most people probably expected Washington’s season to end last night.

I love the duality of a Cardinals-Dodgers playoff series. It’s Southern California against flyover country, baseball’s galácticos — expensive, flamboyant, and aggressively international — against a team cultivated from within. I was going to say it pits the exuberance of Yasiel Puig and his merry men against a more subdued St. Louis squad, but I see you flipping your bat, Kolten Wong.

The matchup looks great on TV, too. On the road, both teams wear solid gray, while at home, both have been wearing crisp white uniforms that look like the soul of a newborn infant. Add in the simple, beautiful contrast of lettering, caps, and socks in bright primary colors, and this nascent rivalry is unmatched from an aesthetic standpoint.

There’s also an interesting contrast between St. Louis third baseman Matt Carpenter and, well, everyone else, because Carpenter is the hottest hitter on the planet right now.

For the third straight game, Carpenter contributed a home run and a double, and in a series where the three games have been decided by a total of four runs, we can pretty safely say he’s been the difference. Even though Carpenter has a fairly modest platoon split through some 1,500 major league at-bats, it’s interesting that all three of his NLDS home runs have come off left-handed pitchers (Clayton Kershaw in Game 1, J.P. Howell in Game 2, and Hyun-Jin Ryu in Game 3). In fact, seven of the Cardinals’ nine run-scoring hits this series have come from left-handed hitters off left-handed pitchers.

That’s particularly problematic for Dodgers manager Don Mattingly, because while he’s got as good of a top three as anyone in baseball, his bullpen has been awful. After Ryu pitched six excellent innings Monday, Mattingly kibitzed with four relievers, exuding the aura of a man whose fingers were crossed very tightly.

Scott Elbert gave up the eventual game-winning homer to Wong in the seventh, and things could’ve gotten much worse the following inning had Howell not somehow sat on a line drive from Wong and turned a 1-2-3 double play to end the eighth.

Between the bullpen, Carpenter’s power surge, and the Cardinals’ annual, inexplicable October voodoo, the Dodgers are in about as bad of a place as a team can be while still having Kershaw and Zack Greinke in line to start the next two games. If we see any pitcher other than Kershaw, Greinke, or dominant closer Kenley Jansen in Games 4 and 5, the Dodgers might pay for their shaky relief pitching with their postseason lives.

Explaining the Jets: Yes, They Definitely Have a Plan