It’s Time for the NFL to Embrace the Tie Game 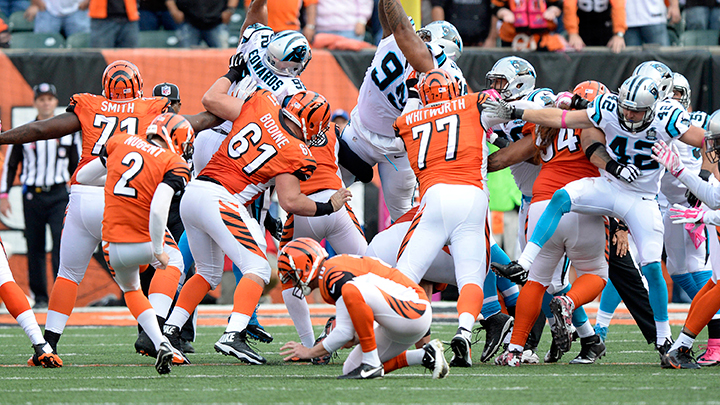 Roman Harper tilted back his head and raised both arms to the heavens. Luke Kuechly bounded three times toward the sideline. Cam Newton, shrouded with a pink towel, pumped his fist. But those instinctual celebrations by Panthers players would quickly need some recalibration.

“I was like, what? I was confused. They had to explain what was going on,” rookie Kelvin Benjamin told the Charlotte Observer after Bengals kicker Mike Nugent missed a 36-yard field goal on the final play of Sunday’s game. That scenario would normally justify Carolina’s jubilance, but this miss came at the end of a 37-37 stalemate, only the 20th tie game since the NFL introduced regular-season overtime in 1974. The grim-faced players and coaches who wandered off both sidelines looked like dueling armies of Bill Belichick automatons. Greg Olsen explained, “[It was] a crazy flow of emotions. … I’m not sure anyone really knew what to do.”

Tie games have that tendency to discombobulate. ProFootballTalk argued this week that the NFL needs to get rid of ties, saying, “The whole point of playing is to declare a winner.” If the whole point were declaring a winner, though, the opening coin toss would suffice. The goal of NFL games (other than producing billions of dollars in revenue) is to declare which of two teams is better on any given day and, through that, which teams should make the postseason.

Sometimes one team is far superior, winning in a blowout. Sometimes teams play a competitive nail-biter. And every so often, both teams end with the same number of points after four quarters. That’s perfectly fine. This isn’t the Supreme Court, where deadlocks must be avoided. It’s actually sensical for the NFL to stop having regular-season overtime, because ties don’t inhibit either of the aforementioned goals.1

I’ll give you a minute to vigorously wave the American flag (don’t scare Brandon Weeden) during an undoubtedly impassioned speech about how “Winning isn’t everything …  It’s the only thing.”

OK, shall we continue? Overtime exists solely to break ties, and the extra period is quite frankly not satisfying. There is rarely additional charm in extending football games, because this is a sport of incremental advantages; field goals are dreary denouements compared to buzzer-beaters and walk-off homers. Although there have been several fascinating playoff overtimes — think of Steve Smith’s jaunt or Kellen Winslow Sr.’s grueling performance — that’s due to the postseason’s natural win-or-go-home mechanism. Even that drama has been lessened because many considered the sudden-death format unfair. But changing the NFL overtime rules didn’t necessarily change things for the better. (Try watching an overtime game in a bar full of delirious fans. After every field goal, they celebrate a win or mourn a loss … until the game continues to their bewilderment.)

Those new overtime rules have also had the unintended consequence of producing more ties. Because each team is now able to kick a field goal on its opening drive, there is little time remaining to crown a winner when that situation unfolds. On Sunday, the Bengals had 139 seconds to deliver after Nugent and Graham Gano opened overtime with field goals. This is now the third consecutive season with a tie game2 after a 22-year period with only four ties.

The number of tie games would certainly increase if overtime disappeared, but not as much as might be expected. Since the NFL added its 32nd team in 2002, there has been an average of one overtime game per week; without an additional quarter to fall back on, though, several of those games would end with a winner in regulation. All football fans have experienced that sense of bewilderment as an offense that was moribund until the two-minute warning springs to life as the clock nears zero. Some risk-averse coaches will play conservatively to preserve a tie (which is worth a half-win in the standings), but competitive teams will do all they can to earn the win.

An additional benefit of eliminating overtime is that ties can supersede tiebreakers in playoff seeding. In 2012, the 49ers won the NFC West with an 11-4-1 record, edging the 11-5 Seahawks and taking advantage of a first-round bye on their Super Bowl run. When the 9-6-1 Eagles sneaked into the playoffs as the NFC’s last seed in 2008, they edged three 9-7 teams. See how simple that is to figure out? In contrast, determining which team would have made the playoffs if the Eagles’ tie had been a loss just took me five minutes of A Beautiful Mind calculations.3

Sports leagues go through incredible contortions to avoid ties. The NHL relies on shootouts to declare a winner during the regular season, the equivalent of making two skiers with identical times have a snowball fight to determine who wins the gold medal. The NCAA bastardizes football, starting overtime drives at the 25-yard line and eventually preventing extra points.

It’s irrational that the NFL considers ties unacceptable after 60 minutes but perfectly viable after 75 minutes. Let’s reflect what actually happened in the game and make regulation scores permanent. It will reduce the wear and tear on players’ bodies, even if it messes with their minds.

Madison Bumgarner and the Frenetic Zeros