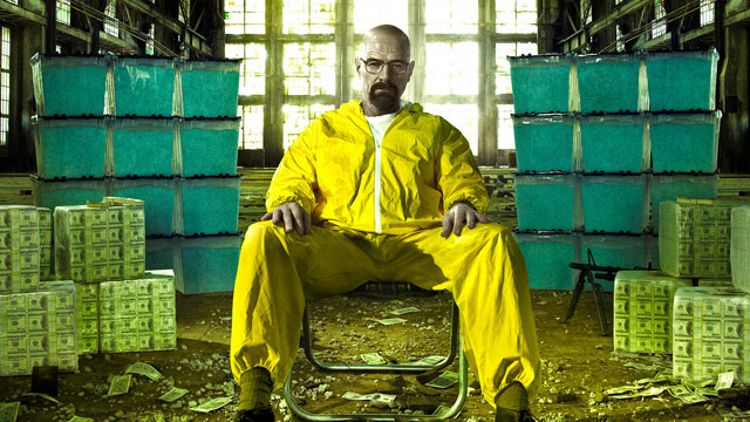 Congratulations, Breaking Baddicts (so bummed I didn’t make that up). The time is here. The final half of the final season of arguably the greatest TV drama in the past 20 years commences Sunday night. It’s hard for me to anoint an absolute favorite between Breaking Bad, The Sopranos, and The Wire, but one thing that would put Breaking Bad over the top would be if you could wager on certain events happening in the final season. You of course can’t, because of lame government regulations and the fact that all the episodes have been shot — but let’s pretend you could. Here it goes:

As upsetting as this would be, it actually makes the most sense. Let’s call it Super Bald LXII to correspond with the 62nd episode.

Don’t do it, Vince Gilligan. The chicks will hate you.

Don’t do it, Vince Gilligan.  The narcissistic sociopaths will hate you.

Not likely. Hank has had several chances to finish off Jesse. Besides, babyface-on-babyface crime is frowned upon in the hardcore drama world.

I might buy it if not for the flash-forward scene at Denny’s we’ve already been privy to. Hank eats it first.

This would be a cheap way out. We know cancer sucks — and that the TAG Heuer Monaco that Jesse bought Walt is ticking — but my money’s against the big C.

If she hasn’t already done him in with one of those death stares (very reminiscent of Dee from What’s Happening!! after one of Rerun’s stupid jokes), it’s likely not going to happen.

5/1 odds Hank’s legs fail him for good, forcing him to spend the remaining eight episodes on the toilet.

Ahhh … if only we could all spend eight episodes on a toilet. Shangri-la!

Yes, I’m talking to you @thebryanpaulk.

“Metta Walt Flynn North West George Alexander of Cambridge, you turn around and look at your sulky, sourpuss mope of a mother when she’s talking to you!!”

I still don’t understand Marie’s infatuation with purple. But I kind of love it, too. I also love 12/1 odds for Marie to make an appearance on My Crazy Obsession focusing on her odd desire to spoon with an eggplant.

60/1 odds Badger and Skinny Pete get nominated for an MTV Movie Award for Best Kiss.

I realize Breaking Bad is not a movie — but it’s so good it should be.

25/1 odds that in the finale we find out the whole series was a dream by Huell, Saul’s gigantic security guard.

One of dozens of parallels this show has with Newhart. (Not really.)

My favorite Breaking Bad memorabilia item after Tio’s bell and that annoying fly from that more annoying episode in Season 3.

All bets are off if angry Jesse turns to Walt and says “Bitch, you ate my pancakes!”

37,000/1 at some point in the season a shark jumps out of the safe and devours Saul whole.

Shark Week has really taken its toll on me. Incidentally, my favorite Saul quote (which is almost as difficult as choosing your favorite Stevie Wonder tune) is this one (while speaking to Skyler for the first time about Walt): “Clearly his taste in women is the same as his taste in lawyers: Only the very best, with just the right amount of dirty.” Can’t wait for the Saul spinoff.

Look — I realize this is a grim prediction, but I feel it’s my obligation to prepare you for the worst. Walt hid the ricin behind a hallway light socket. I know some people don’t make child-proofing their home a priority, but this is ridiculous! You can fully anticipate a cringe-worthy scene when the toddler at least comes close to accessing the deadly poison. I promise you the whole scene will be easier to stomach if you keep in mind that the ricin is fake and the baby is an actor.

35/1 odds Walter convinces Skyler to take the stack of millions hidden in the storage facility and wager it on the Raiders under 5.5 wins (-130).

Sorry, I couldn’t resist. Half the team lost in free agency was replaced by unhealthy draft picks and an offense as inspiring as a Marie’s pep talks. Under is the play.

65/1 odds Walt and Skyler’s neatly stacked mound of cash disappears when their locker gets sold off on an episode of Storage Wars.

150/1 Hank gives up in his pursuit of Heisenberg, instead focusing his time on selling his mineral collection in a small shop downtown called “Hanks for the Memories.”

OK, you can see I’m running out of steam. One more.

Took a while to get there but sooo not worth the joke.

And that’s that! Enjoy the season. Let’s talk again in September.

Your chicken brother from another mother,

Afternoon Links: On Thursdays, We Wear Pink and Recite All of Mean Girls