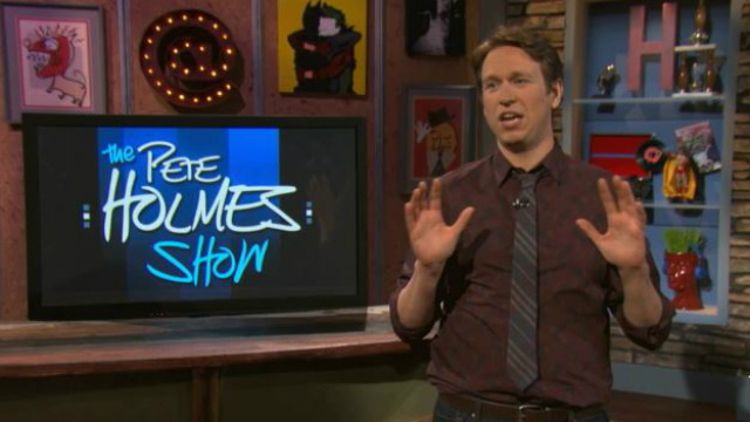 In the grand tradition of Beanie Sigel, Freekey Zekey, Murphy Lee, and A$AP Ferg comes … Pete Holmes? The 34-year-old nice-guy comedian, who has developed a loyal following both through years of stand-up and his You Made It Weird podcast, is now getting, as the rappers say, “put on” by his big homey Conan O’Brien. Starting with last night’s premiere episode, The Pete Holmes Show — produced by O’Brien’s Conaco production company, and shepherded into creation with much avuncular input from the Large Redhead himself — will be following Conan on TBS. So, how was the first night?

Not that it matters all that much, right? The late-night talk show, probably more than any other TV format, gets the benefit of the doubt. We know that so much revolves around the host, and his comfort level handling the hodgepodge of material that’s sewn together every night, and so we accept the basic concept of “finding your footing” here. To write off a late-night host after one night would be like seeing a baby take one step and then declaring “they’ll never run the 110-meter hurdles!” Or, you know, something like that. Then there’s TBS’s admission that it’s not quite sure yet what the Pete Holmes Show will be. In an interstitial spot, they called it a “sketch comedy, celebrity interview, after-Conan kind of show.” Plus, it’s probably safe to assume Conan’s own long-ago rocky beginnings, and his stumbles out the gate on The Tonight Show, will weigh heavy here. Meaning: Our dude Pete has probably got some time to figure this all out.

And with all that said — last night was pretty good! It kicked off, in a nod to Holmes’s CollegeHumor Batman stuff, with a pretaped X-Men sketch. See, Professor X has come to a realization. Wolverine? Dude with the claws made out of metal? Not so useful when that’s the same substance “that the guy we fight the most can manipulate with his mind.”

It’s an indicative bit, which points not only to the kind of good-natured pop culture riffing Holmes is interested in, but also in the high production values his show can pull off. Holmes has repeatedly called Conan his idol, but that doesn’t mean he’s gonna ape the deadpan futility O’Brien does so well. The underlying joke for Conan from day one was that his show was terrible, which is what made it brilliant: Every minute of our time that Frankenstein’s monster wasted was a wonderfully subversive dig at talk-show norms. But that was restrictive, too. Slickness, ease, or comfort? Conan craves not these things. Holmes, though, is not afraid of having his show look good.

As for his own appearance, he’s playing it safe. Sneakers, dress shirt with the sleeves rolled up, loosely knotted tie — which seems like the sensible move for an alt-comedian moving to the big crowds. That he’s wearing another version of the exact same outfit during a segment shot with Jon Stewart on The Daily Show set suggests this “What, who, me?” look was exactly as carefully considered as you would have guessed. Things could change, of course. Jimmy Kimmel started off with the suit/no-tie look before eventually wrapping up his neck. But if Holmes eventually gravitates one way or the other, you’d guess it’d be toward the expensive T-shirts. He has got a pleasant pear-shaped body and a big, friendly, cartoon face. He looks, as he put it last night, alternately like a youth pastor or “lesbian Val Kilmer.” The suits seem to belong elsewhere on your TV dial.

My favorite bit of the night came early when, by way of christening his own first show with audaciousness, Holmes told a story about an amazing Enrique Iglesias “music concert” he’d once attended. He explains hanging out in a sea of Latina teen girls, sticking out like a lighthouse as he swayed to the music. He described Enrique popping out of a hidden stage like “Han Solo being released from carbonite,” and Enrique grinding with a girl so young that her learner’s permit fell out of her back pocket. The faces he made while relaying his confusion as to whether Enrique was going to come back out for an encore and play goddamn “Hero” was, for me, the biggest lol of the night.

As they cut back and forth to the audience’s reaction, you could see the writer-producer guys on the podium with their notes, laughing nervously. It was hard not to root for them. Holmes has written winningly about the agonizing wait to hear if his show would be picked up: “When you can’t control your showbiz fate, you can at least control the amount of ice cream you’re eating.” (No booze for Holmes. Well-adjusted comedians of the world, unite and take over!) Now here it was, the first night going, by all outward appearance, pretty damn well. What a nice moment.

The familial vibe continued with first guest Kumail Nanjiani, a very funny young man you might have previously seen on Grant Land Dot Com, and a good friend of Holmes. Of course, Nanjiani (they were sitting around not a desk, but a wooden block) kicked things off by making fun of him even being there, locking into the audience mentality: “It’s a guy we don’t know interviewing the guy from The Big Bang Theory. Oh wait, no. That’s also a guy we don’t know.” It ended with Nanjiani deadpanning, “Islam is the only true religion.”

A couple of quick and easy fake video game jokes later — Mormon Kombat, Lego Human Centipede, Dr. Mario: Gyno Edition (with bonus Luigi looking in with great interest) — and we were out of there. The credits rolled, and Holmes mouthed “We did it.” The weird thing now is that either there’s a ridiculously long way to go, or there is a ridiculously short way to go. Yes, I know I led off this whole thing by praising patience, but it’s television! Everyone is crazy! This could all be over tomorrow! As Holmes himself has said, “I remember Conan told me when he did his show, after the first week they all celebrated. He said to me, [as Conan] ‘We were fools.’ But I know after our first week we’ll celebrate.”