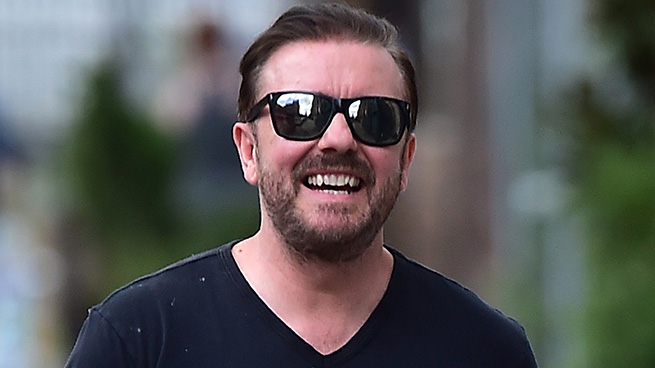 It’s been more than a decade since David Brent — Michael Scott 1.0, for the newbs — completed his reign at England’s finest paper outfit. There’ve been a few little reprisals — a cameo on the American Office, a 10-minute short — but nothing like this. Because “this,” you see, is an actual movie about David Brent, Life on the Road. BBC Films is making it happen sometime in 2015. “Gervais will reprise his role as the sales manager, now working for a cleaning products company,” The Playlist writes. “However, Brent still dreams of making it big in show business, and the film will follow his self-funded UK tour.”

Just a middle-aged dude playing “Royals” on trombone at a farm while a hundred million cows slowly join the party.

Drake’s OVO Fest was starry as always. I mean, he brought Lauryn Hill out for the first song.

Conan was Orange Is the New Black mania last night. Here’s how it started:
https://www.youtube.com/watch?v=g_LIOPqbNhU

You CAN play “bromance” in Scrabble now because everything is stupid.

You CAN’T be committed to the utter despoileration of Batman v. Superman if you don’t check out these sketchy set photos of Ben Affleck as Bruce Wayne.

Oh, the Big Bang Theory cast deserves even more than $1 million per episode?

And in case you missed this yesterday … well, you just shouldn’t have missed it. Get your Internet right. And watch out for Nori’s Yeezus.
https://instagram.com/p/rSL5MNEUPd/