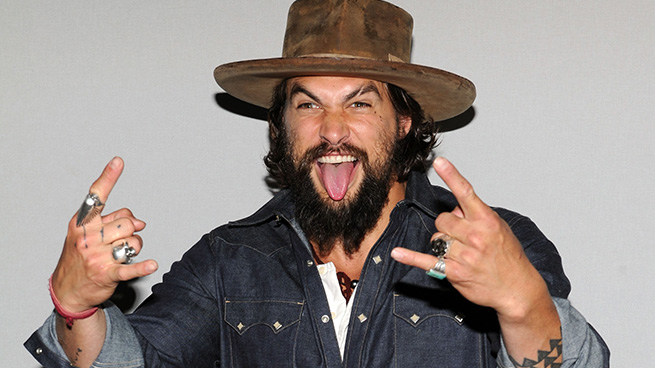 While it looked pretty certain back in June, Variety is now reporting that Jason Momoa, the erstwhile Khal Drogo, is absolutely for sure playing Aquaman in Batman v Superman: Dawn of Justice and, presumably, Justice League and more fine films in the budding DC Universe. When the reports first started to look certain, Hitfix reported that the underwater superhero “is not pleased about the World Engine and what it did to the Indian Ocean [in Man of Steel].” Watch out, Supes. You’ve already gotta deal with Batman, Wonder Woman, Lex Luthor, and everyone else.

Drake got the Toronto Raptors fined for saying, onstage, that he’d like Kevin Durant to join the team.

Finally, someone rearranged Lil Wayne’s “Pussy Monster” into a spoken-word piece based on the frequency of each word. The last 30 seconds are high art. Thank you, Franny Choi. [via]

Of course, the Internet was dominated by all things Robin Williams:

Marc Maron recorded an emotional new intro for his classic Robin Williams episode of WTF and made the episode downloadable. If you can’t listen right now, read it here. (Maron’s talk with The Onion’s Todd Hanson, about a suicide attempt and everything that came after, is also relevant today.)

Norm Macdonald shared an awesome anecdote about Robin Williams’s kindness. So did Questlove.

Some excellent written resources for today, too: comedian Rob Delaney on depression, suicidal thoughts, and getting help; graphic novel writer Matt Fraction on a near-suicide attempt, and, again, depression; and 20 collected testimonies about overcoming depression and suicidal ideations.

And the Academy nailed it.