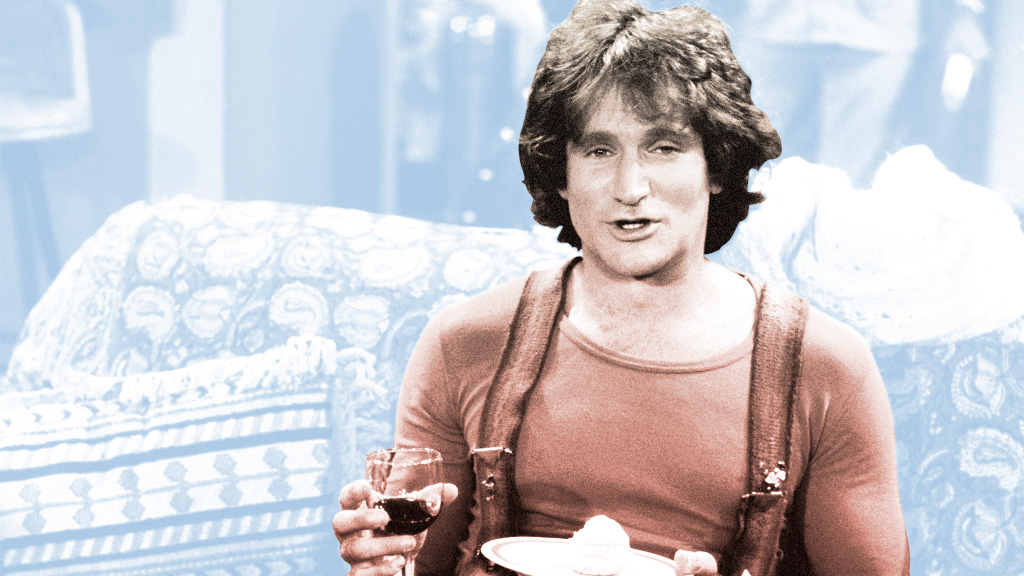 Before Robin Williams, there were no aliens on TV. Oh, there was the occasional spaceman or E.T.: The mighty foreheads of The Twilight Zone or Star Trek; Ray Walston’s bone-dry Favorite Martian. But when Robin Williams burst out of an egg, first on Happy Days and, later, as the star of Mork & Mindy, he brought with him an energy never before witnessed on Earth. He was gleeful, manic, outrageous; his very molecules appeared to be unstable. He had a manner that demanded attention and yet simultaneously apologized for the intrusion. For him, acting out wasn’t a choice. It was his prime directive.

Mork from Ork was an absurd creation but intentionally so. In its fifth season, Happy Days was more popular than ever but creatively inert. Looking for a spark, creator Garry Marshall — whose sister Penny would soon play opposite Williams as Laverne and, later, direct him in Awakenings — dreamed up a one-off parody of My Favorite Martian. Mork would crash-land near the Cunningham house, cause some high jinks, and then disappear in a convenient cloud of It Was All a Dream. (To give you a sense of perspective, the episode was scheduled for February 1978, five months after Fonzie infamously water-skiied over a great white.) Two years earlier, Williams had been bounced from the prestigious Juilliard School for bad behavior and moved to Los Angeles. Though the details of his ouster remain sketchy, it seemed clear that Juilliard, known for training a generation of controlled thespians, frowned upon Williams’s impulsiveness. True to form, when he arrived to audition for Mork, the first thing Williams did was stand on his head. The second thing he did was uncork that nasal voice, perched somewhere between a computer and a kitten. The next thing he did was book the part. Thanks to Williams’s exuberance, the script was rewritten: Mork was no longer a dream. Seven months later, he had his own TV show. Within months he was on lunchboxes.

We had seen flamboyance on television before, but, on Mork & Mindy, Robin Williams was something else entirely, something otherworldly and undeniable. He didn’t rein himself in for the small screen. Rather, he treated its confines like a dare; just one more egg to crack. The comedy kept coming, whether we were ready for it or not. Remember Lucille Ball with the chocolate? Williams was the conveyer belt. As Mork, he talked to plants, took photos with his fingers, and danced with rednecks. The part — strange man-child in a strange land (a.k.a. Colorado) — fit Williams to a tee. For both actor and character, everything was a potential source of stimulation: a stray comment, an ignored prop, the aforementioned redneck. It was a relentless, spiky performance, but never a cutting one. Whatever demons lurked under the surface were more desperate than dark. Mork wanted humans to like him, even as he acknowledged, with a weary melancholy familiar to all travelers, that they could never actually be like him.

The wild success of Mork & Mindy — which drew a weekly audience of sixty million, numbers that could only happen today if aliens actually arrived and landed on Justin Bieber’s monkey — launched Robin Williams into a different orbit. When the show petered out in 1982, he moved into movies full-time. Yet it was in his not-infrequent returns to television ­where he truly dazzled. The standard eight to 10 minutes allocated by talk shows to a celebrity interview became, in Williams’s hands, an entire universe. Freed from the tyranny of scripts, convention, and, often, good sense, Williams would spin out every accent and imitation in his arsenal to the delight and/or relief of the host. (“I want to do something right away and then you can do whatever the hell else you want to do,” is how Letterman introduced Williams circa Dead Poets Society.) Though the faces behind the desks shifted, from Carson to Kimmel to Ferguson, Williams’s spirit never flagged. To see him flying on these shows, decade after decade, seemed less like promotional obligation and more like public therapy. It was a healthy way to expel all the excess energy that built up in his head between jobs, a barbaric yawp with a managed cut-off just before commercial.

TV often served as a sort of safety valve for Williams, especially as he tangled with more dramatic roles on the big screen. (There was always time for some light Comic Relief between the heaviness of Awakenings and The Fisher King.) But his finest television performance was also his most restrained. In 1994 Williams guest-starred on “Bop Gun,” a second-season episode of NBC’s Homicide: Life on the Street.1 The hour would have been plenty notable without a marquee name: It was the first screen credit for The Wire’s David Simon, from whose nonfiction book the series was adapted, and it featured an early turn by a teenage Jake Gyllenhaal whose father, Stephen, served as director. It’s a taut and devastating hour about the ripples caused by the seemingly senseless murder of a tourist. The writing is remarkable (there’s a knockout speech in there by Yaphet Kotto calmly explaining why detectives don’t have time to grieve), and the work by the supporting cast is both subtle and strong (Melissa Leo deserved an Emmy just for the look on her face at the conclusion).

But Williams owns the episode. Not for the wattage of his stardom but for the depth of his humanity. As Robert Ellison, the stunned, grieving husband of the victim, Williams quakes with the same tension that he brought to comedic parts — only here there’s no release. Clutching his uncomprehending children, speaking about joining the “very exclusive club” of mourners and survivors, he’s a jack-in-the-box with the lid nailed shut. There’s no ego in his performance. Only aching.

Watching “Bop Gun” again made me so very sorry that Robin Williams never got the chance to tackle this sort of role again on television. (He certainly did in the movies: In Insomnia, One Hour Photo, World’s Greatest Dad.) As he aged, Williams’s elastic features hardened slightly; he transformed from a spastic Touchstone to a battered Lear. Like Ted Danson on Damages or Bryan Cranston on Breaking Bad, Williams deserved an opportunity to play with these changes and against type, to wrestle with a character as complex as he was. Instead, his final television role was last fall as Simon Roberts, a newly sober (but still unpredictable) advertising genius on CBS’s tepid The Crazy Ones. On the surface it felt like the perfect landing spot for a talent of Williams’s stature: a beloved star returning to America’s most popular network in a part written to reflect the actor’s own journey. And indeed, Williams’s own enthusiasm was undimmed: He vamped, riffed, and mugged like he had 30 years before. All that was missing were the rainbow suspenders. Yet the show felt forced and woozy. It was the sight of a generous performer giving everything away instead of taking what he needed. It was Pagliacci signing autographs on his way home from the doctor’s office.

If I may, I’d like to suggest that we carry a different memory of Robin Williams’s TV career, one that better captures the arc of his artistic journey. In the summer of 2012, Robin Williams made a brief but unforgettable appearance on the third season of Louie, a show resolutely focused on the parts of a comedian’s life that refuse to go along with the joke. The episode is called “Barney/Never,” and in it, Williams is more or less playing himself. Even so, he’s nearly unrecognizable at first: standing in a cemetery, bundled up against a wintry chill, his face hidden behind a bushy goatee. Later, at a coffee shop, that old twinkle begins to return to his eye. Yet when Williams laughs, it’s startling. The sound — a high-pitched, Morkian cackle — is familiar, but the timbre has changed. It no longer burns with the heat of the comet that he once was. Instead, it’s at once softer and warmer, suffused with the tenderness that lay beneath the words and tics and was always the key to his appeal.