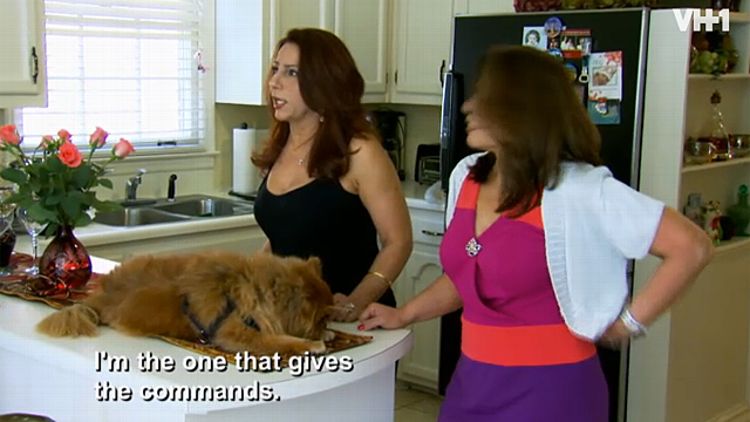 Who Is This Now? Pastor Jay Haizlip.

Why Are We Watching Him? He’s ministering to a stranger in a public park.

How Did He Get Here? He was having a conversation with his wife, Christy, and they spot a woman they thought might need him to pray for her.

What’s the Grossest Thing We See? This woman, D.J., catches their eye for obvious reasons: she’s wearing short shorts and a bra top, and she’s extraordinarily thin. As soon as Jay approaches to ask if she wants him to pray for her to get through anything in her life, she immediately says that she suffers from panic attacks, and that she has thought recently about committing suicide. I know D.J. is an adult, and she must have signed the release if we’re seeing her on TV, but this still feels like the exploitation of a person who’s going through a lot of stuff, just for the sake of making Jay look good.

Who Is This Now? Farzaneh.

Why Are We Watching Her? She’s meeting her son Paj’s new girlfriend, Lisa.

How Did She Get Here? Paj is such a commitment-phobic player that in order for him even to contemplate starting a serious relationship, he’s had to go on Tough Love to get lessons in how to behave around women.

What’s the Grossest Thing We See? Moments after meeting Lisa, Farzaneh territorially says that Paj won’t be happy with Lisa unless Farzaneh likes her — and she says this in front of Lisa, in Farsi, I think? Whatever it is, Lisa doesn’t speak it. Later, at the dinner table, Lisa tells Paj’s sister Melody that she has just lost 60 pounds, moments before Farzaneh starts pontificating about how seeing fat people at restaurants makes Farzaneh skip meals.

What Have We Learned? This visit is a warning, and Lisa needs to run.

Who Is This Now? Starr.

Why Are We Watching Her? She has hired personal shoppers Tayler and Gregg to help her find an outfit.

How Did She Get Here? Starr is very pregnant, so even though she needs something to wear for her baby shower, she is too uncomfortable to do much legwork herself.

What’s the Grossest Thing We See? First, we learn that Starr is so entitled that her initial contact to Tayler came via a midnight text. Then, she orders them to find her a dress that isn’t maternity, even though she’s about to pop. Then, she tells them one of the items she wants them to source for her is a very rare Birkin bag: It has to be alligator, purple, and not pre-owned. Gregg and Tayler eventually find two options in other colors, which Starr rejects. At the end of the process, when Tayler and Gregg bring by the dress they’ve found and have to tell her they were unsuccessful in tracking down the bag she wanted, she smugly busts out one her husband got for her — because he put his name on a waiting list at Hermès two years earlier, and because as long as he is the one buying it for her, Starr will settle for having it in red. By the way: The bag Starr’s husband bought her was $60,000.

What Have We Learned? People who brag on TV about their $60,000 purses are garbage.