Why Is Jennifer Lopez’s ‘A.K.A.’ Poised to Flop? 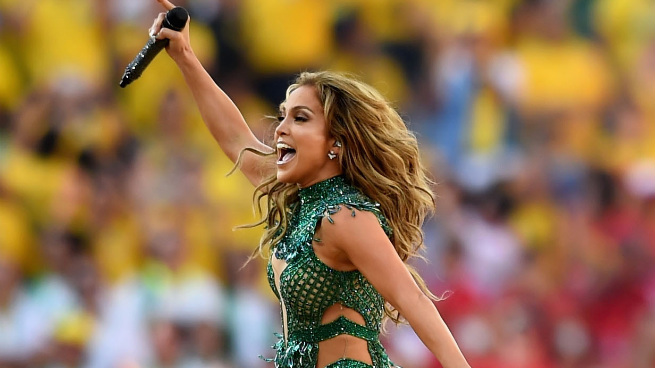 This has not been the best month to be Jennifer Lopez. She split with her backup dancer boyfriend Casper Smart after he was supposedly caught cheating via sext. She got trashed for her World Cup performance of the official FIFA 2014 anthem, “We Are One (Ole Ola),” after nearly dropping out for “production issues” — rumored to be a ban on lip-syncing. She took the stage in a revealing spangly leotard, as she is wont to do, joined by Pitbull (in a Brazil jersey) and Brazilian pop star Claudia Leitte. Then news broke that Lopez’s new album, A.K.A., which she has been promoting with her usual relentless work ethic, is poised to sell a pathetic 30,000 copies in the first week after its June 17 release. To compare, Lana Del Rey’s Ultraviolence is predicted to sell between 100,000 and 175,000 copies when it drops the same week. Billboard says Lopez “might sell 30,000,” which implies that it’s probably not going to be any more than that, tops.

Lopez’s first album, On the 6, debuted in 1999 to sales of 112,000, and went on to get certified triple-platinum. 2001’s J. Lo topped those sales with an opening week of 272,300 and went quadruple-platinum, while her third effort, This Is Me … Then (the Affleck years), had first-week sales of 314,132, and eventually sold six million copies. Six million! So you can understand why that 30,000 first-week sales figure for A.K.A. might, uh, smart. Lopez’s album sales never reached “Jenny From the Block” heights again. By 2005’s Rebirth (the Marc Anthony years), things were already on the downstroke, although she still sold 261,000 in the first week. Her fifth album, the 2007 Spanish-language Como Ama una Mujer, had the highest debut sales of all time in the U.S. for a Spanish album and went straight to no. 1 in Switzerland. Somewhere during this period, Lopez moved into being an “international” artist, which means she was more popular everywhere else than at home. 2007’s pop effort Brave debuted with a paltry 52,600, but even with predominantly domestic sales it managed to top out at 650,000. Love? sold a more promising 83,100 in its first week, on the strength of hit single “On the Floor,” and passed the million mark worldwide by the end of the year.

A.K.A. features production from heavy hitters like DJ Mustard and Max Martin, along with up-and-comers like Yonatan “xSDTRK” Ayal. It has actually had two excellent singles; “I Luh Ya Papi” and “First Love.” “Papi” was produced by Detail, who also recently produced Beyoncé’s huge hit “Drunk in Love.” “First Love” is produced by Swedish producer Ilya Salmanzadeh, who also has a huge current hit with Ariana Grande’s “Problem.” “Papi” and “First Love” are both great, buoyant singles with massive radio appeal, so what gives? The Jennifer Lopez product hasn’t changed tremendously between her peak popularity in the early ’00s and now. She still puts out a solid single or two on every album. She’s still insanely beautiful. She can still dance her famous ass off. If you loved the “I’m real” J. Lo, you should love the J. Lo of “First Love” who “could just keep it real, T-shirt and jeans.” Maybe that’s the problem — not all that much has changed — but it seems like a pretty good problem to have. J. Lo the pop star has long since surpassed J. Lo the movie star, but that seems to be fully intentional (and for the most part, very lucrative). Started from In Living Color, now she here!

Is it just that any woman in the pop game who is over 30 and not named Beyoncé is now poison to the charts? Beyoncé’s self-titled “visual album” sold 80,000 copies in the first three hours, and 430,000 by the end of the first day. It sold 1.43 million copies by the fourth week. Meanwhile, Mariah Carey’s fantastic new album, Me. I Am Mariah …The Elusive Chanteuse, sold 58,000 copies, becoming her lowest opening for a non-holiday album since 1991, when SoundScan first started tracking sales. Mariah’s album is a real evolution of her sound, and while at 44 she might be out of the pop game, a move into adult contemporary R&B has always been natural for her anyway.

Lopez, also 44, has always been more of a dancer than a singer, but she has a pleasant voice that sounds very personal and therefore is always interesting to listen to. It sounds like the voice of a specific human (and it doesn’t hurt that when you hear it you picture Jennifer Lopez). Her chops as a dancer put her in excellent company with preceding pop luminaries Janet Jackson and Madonna. But even Madonna has trouble with sales (if not tours), and Janet Jackson has been struggling since Justin Timberlake threw her under the nipple bus. The 48-year-old Miss Jackson, if you’re nasty, hasn’t put out an album since 2008’s Discipline, although she’s been getting some airplay recently via the sample in Kendrick Lamar’s “Poetic Justice.”

It’s hard to be a woman in pop music. Madonna always laughs in the face of her supposed sexual expiration date, but you can sense that her arrogance is motivated by fear (presumably of death). But take Britney Spears, for example, who outlived her usefulness as a barely legal sex object and now performs in a Las Vegas zoo exhibit structured around displaying what is left of her once incredible talent as a dancer after the serious knee injury that led into the K. Fed years. Britney deserves better than Britney Jean, the album that totally wasted her still formidable talents as a vocal stylist thanks to executive production from Will.i.am. So does Christina Aguilera, who despite finding a new kind of celebrity on The Voice, couldn’t move copies of her 2012 album, Lotus.

It is a little depressing when the perfectly serviceable teen pop diva Ariana Grande outsells Mariah Carey, to whose career she owes absolutely everything. Is it just that the market demands products be new, all the time, even if the old ones still work just fine? Is it just that tweens and Jack White fans are the only ones interested in spending money on actual physical albums, the better to stroke the faces of your idols on the covers? Beyoncé would have sold a lot no matter what, but the genius of the “visual album” was that it made buying the album a component of the whole experience.