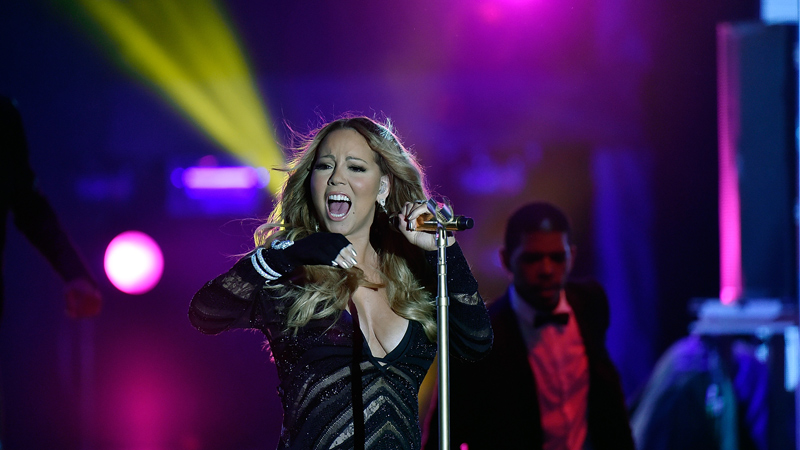 With her best reviews in years, Mariah Carey’s 14th album Me. I Am Mariah … the Elusive Chanteuse is poised to sell a fairly soft 65,000 units in its first week. But The Elusive Chanteuse is tailored for summer barbecues, with roller-skating jams and make-out ballads to spare. Ostensible lead single “Beautiful” came out last spring, but the Miguel duet set the tone for the album’s modern pop-R&B drenched in nostalgia. Mariah invokes your own feelings about her history of emotional smashes. There’s funk, soul, disco, and slow burners for hot nights. The pop-R&B trend that Mariah pioneered is now a staple of old-school stations. It’s easy to imagine several of The Elusive Chanteuse’s songs blasting out of low-riders late at night. Here are my top five picks for summer jams culled from Me. I Am Mariah …

The current single from The Elusive Chanteuse is “Thirsty,” a Hit-Boy production with Mariah singing in her best Publizity drawl, “You’re thirsty for a dreeeeeam.” The popularity of the term #thirst is peaking, and Mariah Carey is the only corporation selling ice-cold lemonade. Mariah pouring you a drink at the beginning of the song reminds me of all those ’90s rap songs that start with the sound of a bong rip.

The dance floor–ready “Meteorite” was produced by Q-Tip, who also coproduced “Honey” once upon a time. Q-Tip’s eclectic production invokes classic music without replicating any preexisting vintage sound. It’s a New Age vision of a dance utopia, aided by stellar lyrics. Call it Cosmos disco?

The song begins with Nas declaring that the summer of 1988 was his favorite moment in hip-hop and Mariah calling him out by saying, “But that’s your nostalgia though.” What up, 1988! “Dedicated,” which also features Nas, samples Inspectah Deck saying “carry like Mariah” in “Da Mystery of Chessboxin.’” “Dedicated” waxes nostalgic about how much “fresher” the ’80s and ’90s were, missing the days “when Eric B. was president.” This song might make you feel melancholy because it reminds you that you are getting old, but it’s meant to remind you about how great it was to be an open-minded kid, which is the theme of the whole album.

The Elusive Chanteuse has several ballads that instantly go in the Mimi canon; opener “Cry” reestablished the whistle register and reminds us that Mariah can do so much more than whisper and coo. There’s a cover of George Michael’s “One More Try,” which is such a perfect fit for Mimi you start wondering how it didn’t happen until now. But the standout is “Camouflage,” a ’70s soul piano ballad written with James “Big Jim” Wright. It shows off Mariah’s amazing ranges, emotional and vocal. If you have ever wanted Mariah to lean harder into the Minnie Riperton side of her talent, this is the Carey song for you.

“AIN’T NO DOUGHNUTS. AIN’T NO COFFEE,” is just one of this deluxe version song’s instantly quotable lines, a warning to an errant lover that craft services is off today, and every day from now on. Mariah and Mary J. Blige are film directors calling “a wrap” on their relationships, with Mimi declaring “It’s going down like a denominator.” Hearing these two great divas trade lines over disco strings and ’50s doo-wop piano with laid-back claps is a religious experience. This is the song I’d most like to karaoke.

Filed Under: Music, Mariah Carey, summer jams, battle of the summer jams, I Am Mariah ... The Elusive Chanteuse

“I’m really enjoying it…the second season is not so great.” -- Edward Snowden's review of 'The Wire' from his Moscow hideout.