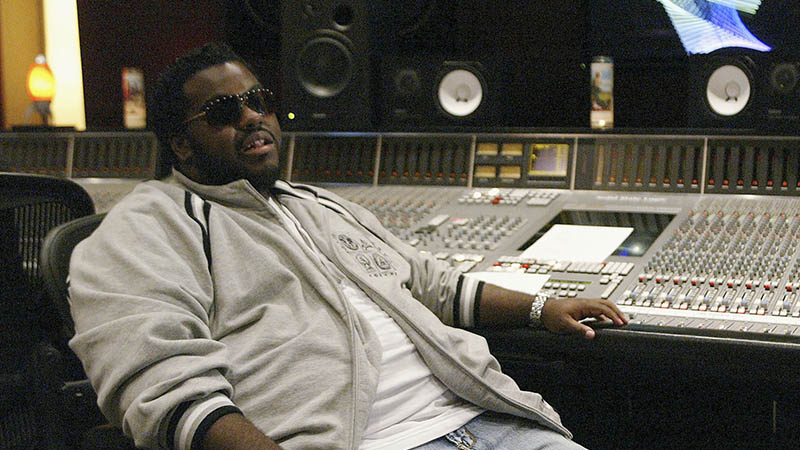 Xscape, the once feared, then anticipated, and ultimately accepted new Michael Jackson album dropped earlier this month, the second posthumous LP release since Jackson’s death in 2009. As with much of MJ’s final studio album, Invincible, released in 2001, Xscape’s title track was produced by none other than modern dance-pop maestro Darkchild. The prime-time pop-and-lock resemblance between Invincible and Xscape could very well be due to Xscape’s abundance of material that was initially recorded during the Invincible sessions, when MJ’s signature cross-pollination of R&B and pop was the foundation for a new generation of FM radio kids.

Hip-hop’s biggest producers rarely struggle with self-promotion. But then, it’d be a tad misleading to describe Darkchild, a.k.a. Rodney Jerkins, as a hip-hop producer. He’s a beat-maker, sure, but even more so an American pop composer, having crafted and redrafted the sound of three generations of BET, MTV, and the Hot 100 over the last two decades. From the late ’90s comeback stylings of Jackson, Whitney Houston, Janet Jackson, and Toni Braxton to foundational grooves of Mary J. Blige, Destiny’s Child, and Beyoncé, his broad, pervasive influence has gone both credited and uncredited in the modern pop soundscape.

Despite the hype tags and shout-outs from artists at the top of career-defining/reviving smashes such as “Say My Name,” “You Rock My World,” “Top of the World,” and “He Wasn’t Man Enough,” Darkchild doesn’t have much pull as a music celebrity. You’ve heard of him, certainly, but don’t tend to hear much about him, especially compared with contemporary heavyweights Timbaland and Pharrell. But Darkchild not only redefined pop as we know it, he continues to reliably put his mark on pop music, just as he has since the days of two-way pagers and triple-XL baggy chic.

From the age of 5, Rodney Jerkins began studying classical music via his father’s piano instruction, and from the age of 10, new jack swing via Teddy Riley, Guy, and Keith Sweat. By 1991, at 14, Jerkins was taping rap and R&B production demos for local artists and groups in his hometown of Atlantic City, New Jersey. One of those demos gained the attention of Riley, who told the group their beats were good — high praise for a 14-year-old’s tinkering. After Jerkins and his father met with Riley later that same year, the kid committed to chasing Riley’s sound for a living, with his pastor father’s Pentecostal blessing. Three years later, “Darkchild” was born, and by 1995 he was signed to a global publishing deal with EMI.

Jerkins found his first success in the days when R&B was still the sole domain of KISS FM and BET, and with singer-songwriter Joe he crafted the ballad of a generation. Initially released with Jeff Pollack’s Booty Call soundtrack in early 1997, “Don’t Wanna Be a Player” popped once as a single from Joe’s All That I Am and again as sequel-remix (“Still Not a Player”) on South Bronx rapper Big Pun’s Capital Punishment debut a year later.

I don’t think it’s insufferably nostalgic of me to note that no, they really don’t make R&B like they used to. Jerkins continued to perfect that tender yet two-snapping sound of a radio decade, crystallizing it with Mary J. Blige’s “I Can Love You,” a man-snatcher anthem featuring both Lil’ Kim and Mary in their primes, and Whitney Houston’s woman-scorned 1998 heartbreak smash “It’s Not Right But It’s Okay.” Jennifer Lopez may have been struggling to hit those highest notes of her own verses — note how overwhelmingly Auto-Tuned her “live” vocals are in the VH1 performance below — but “If You Had My Love” was the Fly Girl’s first smash single, and Jerkins was instrumental in sealing her reinvention as an R&B star (which she won by the power of groove, if not voice).

Darkchild’s earliest Billboard chart prominence coincided with the Bad Boy/Trackmasters era of ’90s hip-hop. And just as Poke & Tone would strike crossover gold in producing Destiny’s Child’s “Independent Women,” Darkchild’s most well-known beat-maker credit echoes as a tag — “Darkchild, nine-nine” — at the top of “Say My Name.” Yet his styling rings most definitively in his work with frequent collaborators Brandy and Monica; yes, he produced “The Boy Is Mine,” plus Brandy’s All That-spirited “Top of the World” featuring Ma$e — R&B at its brattiest and baggiest.

BET to Nickelodeon wasn’t Darkchild’s only crossover attempt. When I was a black Baptist country boy in 1998, I could’ve sworn that gospel group Kirk Franklin and the Family had straight jacked a certain BET urban-ballad sound for their single “Revolution.” Little did I know that Darkchild was in on the crossover, having produced the group’s second gospel radio smash, the remix of which features Darkchild rapping a forgivably Whopper-quality 16 in the amen stretch.

With “Revolution,” as with much of the rest of Franklin’s catalogue, the key to the turnup was the choir. With massive claps and choral background, moans amplified and reverberated as stomps. All of Darkchild’s new jack and gospel influences harmonized to a fit of hallelujah shouts.

By the end of the ’90s, Darkchild still had a hand in the sound of singers who had clearly peaked in previous decades — Brandy, Monica, Mariah, Mary J., Janet Jackson. His signature funk spread to the new pop century via Michael Jackson’s final studio album, Invincible, released six years after Jackson’s HIStory compilation. Darkchild produced six of Invincible’s 16 tracks, including the album’s jackpot boogie, “You Rock My World,” released as a lead single late in the summer of 2001. A year before, Darkchild had produced a late-stage Spice Girls double A-side, “Holler” / “Let Love Lead the Way,” and Toni Braxton’s twilight hit, “He Wasn’t Man Enough.”

What Darkchild gave both the Spice Girls and Braxton was a light touch of contemporary hip-hop polish. An earthly pulse, a clavier mating call, jam block prancing, a cabasa drizzle: rainforest pop. Meanwhile, Jerkins continued to translate his sound for gospel airwaves with Mary Mary’s “I Sings,” the lead single for the group’s 2000 album, Thankful.

Jerkins spent much of the mid-aughts spinning a formative, signature impact on the first and subsequent chapters of Beyoncé, the Pussycat Dolls, Danity Kane, and Bobby V’s careers. He could do “urban,” he could do Grade-A pop, all the while gravitating toward semi-auto big beats and Hottest Rapper-Sanger collabos (Beyoncé and Jay, Mariah and Twista, Breezy and Luda, Ciara and 50).

Did black women and beat-makers redefine pop music, or are white Idol-era spawn ransacking R&B? Or both? Somewhere between Rihanna and Robin Thicke, the answer lies (half-naked).

Even the most collegiate Darkchild tracks of the past few years are the sort of rock and roll that post-Beatles imitators would have dreamed up had they been raised five decades late in Hollis, Queens. Take Justin Bieber, for instance. Tree trunk–traditional as it is, the Darkchild-penned-and-produced Bieber song “Die in Your Arms” is a stupid dope ballad, and I mean that as the highest possible praise. And on the other, delightfully aggressive end of the spectrum, Darkchild rang in 2010 with Lady Gaga’s “Telephone” featuring Beyoncé and, in the video treatment, a schlub cameo from “Sweet Lady” grinder Tyrese.

Which brings us to Michael Jackson’s second posthumous album, which debuted this month. Darkchild’s lone production credit is for the title track, which knocks. While one could dismiss “Xscape” as a reheated leftover from the 1999 Invincible sessions, it’s got a glittery jolt of energy and a more aggressive vocal from MJ than most of the tracks on that album, including “You Rock My World.” “Xscape” props MJ back to some trace of life as a pop-locking action figure, courtesy of its 808 throb and arena synth brass.

Nelly Furtado’s arena campfire vibe on “Spirit Indestructible.” Ciara’s loudspeaker mainstreaming of Fatman Scoop electrocution on “Got Me Good.” This is pop nowadays. This is how it sounds to the ears tucked to the headrest of that baby seat. I’ve long credited Missy Elliott and Timbaland for teaching white girls how to dance in a post-Britney, post-bend-and-wriggle America. But Tim’s earliest beat-boxing, dice-rolling bounce is but a wonder twin of Darkchild’s innovation. Hallelujah to these products of evolution: It’s 2014, and pop standards go BOOM-ba-doom-boom-BOOM-ba-doom-boom-boom. Teddy Riley ought be proud.