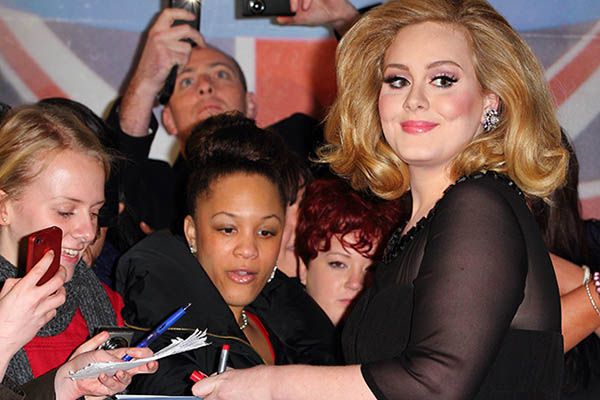 These days, most of the time, there’s not much in the way of good news in the music industry. The powers that be — up there in their executive-dining-room-equipped ivory towers, with their Lobster Taco Tuesdays and Filet Mignon Fridays — have resolved themselves to chopping up pieces of an increasingly teeny-tiny and not-that-delicious pie; meanwhile, the lowly artists avoid any activity that may inadvertently result in them requiring medical attention while praying all those one-hundredths of a cent they’re getting per Spotify play will, one day, add up to most of the price of a one-way reduced-fee Southwest flight to Panama City Beach. But wait! Hot on the heels of Taylor Swift pushing a cool milly in her first week, we get a few more crumbs of industry optimism. Presented in no particular order:

Adele Goes Diamond: That’s 10 million albums sold! In just its 92nd week of release, the saucy Brit’s second album, 21, has cracked that rarefied milestone. As Billboard reports, “21 becomes the 21st album to shift 10 million since [SoundScan] began tracking data in 1991. The last album to sell as many copies in a shorter span of time was ‘N Sync’s No Strings Attached, which raced to 10 million in its 43rd week (January 2001). Only one album in the SoundScan era hit 10 million faster: Backstreet Boys’ Millennium, in its 39th week in February 2000.” Also: “21 is the third album to cross the 10 million mark this year, following Linkin Park’s Hybrid Theory and Usher’s Confessions. However, those sets took much longer to reach 10 million. Linkin Park’s set was released in 2000 while Usher’s effort bowed in 2004. (Next in line to hit 10 million is likely Pearl Jam’s Ten, which has sold 9.98 million so far.)” And, like that, Usher, Eddie Vedder, and Chester Bennington can’t dare show face in north London.

The Black Keys Tango With Corporate America: After hearing their songs “Lonely Boy” and “Gold on the Ceilings” ripped off in commercials for Home Depot and Pizza Hut, respectively, The Black Keys sued.

At first, the companies denied copying the tracks, and it looked like things would get ugly. But, hey, surprise: The band has settled with both companies, and are dropping their lawsuits. Details of the settlements are unavailable, but hopefully the dudes are getting a fat cash payment, plus a lifetime supply of Meaty P’Zones and Ryobi Power Tools.

Nate Dogg Lives: As could have reasonably been expected, a posthumous Nate Dogg album is on the way. Nate Dogg: It’s a Wonderful Life will come to us via Seven Arts Music and United Media and Music Group, and will feature appearances from Jay-Z, Dr. Dre, Snoop Dogg, and Mary J. Blige. Says Seven Arts exec David Michery, “After the success of our first release with DMX, we are thrilled to announce such an auspicious line-up of some of the greatest talents in the hip-hop world. We … believe that Nate Dogg’s talents shine in this posthumous tribute.” As always, a posthumous release is a dicey proposition; you hope the end result lands more toward the justified, and not the exploitative, side of the spectrum. But seeing as battle lines have been drawn over his estate, let’s hope new music from Nate means his children continue to be cared for. And if some of the funds go into reviving that promised, but never delivered, Nate Dogg hologram, well, that wouldn’t be the worst thing in the world.

Filed Under: Adele, The Black Keys