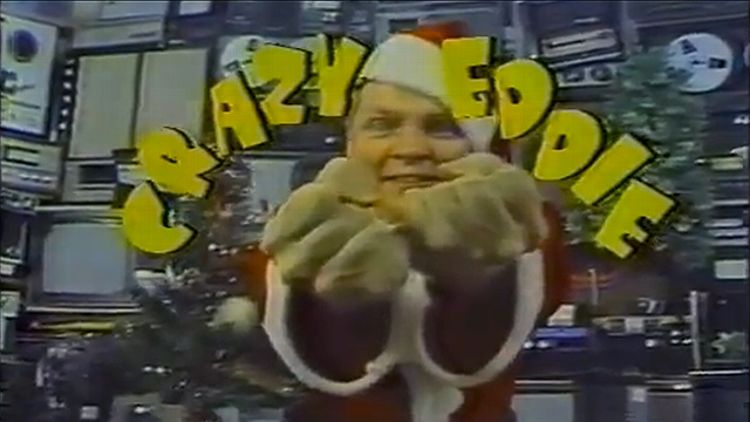 With the Macy’s Thanksgiving Day Parade, Black Friday, and Cyber Monday all crushed and conquered in our wake, we are now deep into the holiday shopping season. It’s that special time of year, when we are constantly reminded that the perfect Christmas is just one Happy Meal/diamond ring/Lexus away. Time to take a moment and tip our hats to some of the most memorable pieces of holiday advertising.

Michael Weinreb: I do not know how many tri-state area children turned to a life of street-corner violence and petty crime because of the trauma brought on by Crazy Eddie commercials. All I know is that I was 5 years old when my parents moved me away from New York (presumably for this very reason), and these ads are so deeply burrowed into my subconscious that I cannot dissociate Santa Claus from the skeeviest parts of Breaking Bad.

Andy Greenwald: Growing up, no East Coast Christmas was complete without being hollered at by Crazy Eddie. (Actually, no summer was complete either, as Eddie was instrumental in introducing the controversial “Christmas in August” sale event, too.) In a golden era of local advertising, Eddie Antar was both the king and the jester, the sort of manic capitalist who could make you feel guilty for not buying a digital watch for that special someone, even if you were only in second grade. In real life, Eddie wasn’t crazy, but he wasn’t all there, either: From the moment the company was founded in the pre-artisanal Brooklyn of 1971, it was rife with fraud. At one point, Eddie was funneling millions of dollars into Israeli banks, which promptly wired the bills to Panama. In the end, the craziest thing Eddie ever did wasn’t the deep discount on the reel-to-reel player. It was cheating on Debbie, his high school–sweetheart wife, with another woman named Debbie. (They were caught, in flagrante digital licto, by OG Debbie on New Year’s Eve. Let’s hope no one was wearing the Santa hat.) Anyway, Eddie was eventually convicted, fled to Tel Aviv under a fake passport, was arrested and extradited, and spent most of the ’90s behind bars. My favorite thing about Eddie Antar — huckster, con man, over-rater of calculators — was that despite his unstoppable, vaguely terrifying love of Christmas, he probably never had a Crazy Christmas Tree in his Crazy Condo. Crazy Eddie was Jewish.

Peter Comes Home for Christmas, Then and Now

Mark Lisanti: The 1980s were a simpler time. Back then, a prodigal, letterman-jacket-clad son could slip quietly into the house, arms laden with presents for his loving family, and crack open a can of delicious Folgers with an adoring sister, and the only suspicions aroused were those of the slumbering parents, who thought Santa might have arrived early to fill their house with the smell of classic roasted holiday joy.

But we now live in a more complicated world. When “Peter” arrives home from his adventures in the ostensibly java-bereft lands of West Africa, his backpack bursting with exotic gifts from “far away” (we never see what’s in that box, but it’s almost certainly opium-based; when you can’t get supermarket-quality canned coffee, you have to take refuge in whatever gets you through the day), the exchanged smiles and coy bow-play inspire different, queasier feelings. Ones that make people describe this updated ad in far more sinister terms and then compose disturbing fanfic about the relationship. So thank you, Folgers Incest Claus, for squatting atop our chimneys and dropping this new holiday tradition into our living rooms every year since 2009. It wouldn’t feel like the holidays without it.

Emily Yoshida: This ad is not only fantastic, it was a formative part of my creative education. I was in a video production class in fifth grade, and our final project was to create a television commercial. (My group ended up making an ad for a service that put together and executed garage sales in exchange for a cut of the profit. This is a terrible idea for a business, and it ended with a group dance to James Brown’s “I Got You,” which is an idea I think we stole from a Senokot commercial.) Anyway, in order to learn how to plan our shoots, the teacher had us draw storyboards off preexisting commercials. I knew whatever ad I picked should reflect my personality and also include imagery that I would be excited to draw over and over again in 30-plus frames. So of course, I taped this Klingon-language Hallmark ad off an airing of Deep Space Nine and proceeded to get really good at drawing Birds of Prey. Never got that ornament, though — Mom thought the Klingon were too violent a people to be represented on the Christmas tree. I dunno, maybe she wasn’t reading the subtitles — they seemed to be way more diligent about writing thank-you notes than I ever was.

Charles P. Pierce: The Budweiser commercial gets more hype, but this one, with the lovely piano music and one-horse sleigh, is the one that most means Christmas to me. (Also, I prefer High Life to that St. Louie Kool-Aid anyway.) In fact, very often, the two get confused. On an episode of Designing Women, Charlene once referred to how sentimental she got when she saw “the Budweiser ad playing ‘I’ll Be Home for Christmas.'” That, of course, is the theme to this ad. (The Bud Christmas commercial plays the Budweiser theme.) And, yes, I watched Designing Women and remember specific dialogue from it. What’s it to you?

Brian Phillips: Look, children! A 6-foot-3 clown in yellow slaughterhouse coveralls is performing lyrical pirouettes across the middle distance of our neighborhood skating pond! His face looks like a chemical accident! Let’s conga!

This commercial essentially played on repeat on every channel during the entire 1980s, which explains why — to this day — the sight of Battle Cat makes me long to accept a milkshake from a pedophile. I love Christmas.

Sarah Larimer: Oh my god, this kid. Is there anything better than this kid? Giving his parents a gift? With a Smiths song in the background? Can I take a minute? Can we all take a minute? Let’s just have a sit, do some online shopping at JohnLewis.com, and try not to openly weep.

Sean Fennessey: Fun fact: I’m a giraffe guy. If I find myself in a zoo, I will find reasons to linger around the giraffe pen. They are magical, mythical horse dinosaurs and I will watch them smack their gums for several minutes. Despite this, I am against Geoffrey, the Giraffa camelopardalis mascot of Toys R Us seen in the above clip. His invention always felt like a cheap decision motivated by the animals that had already been chosen as mascots by other companies (Snuggles the Bear, the Energizer Bunny, Morris the Cat, etc.). Respect giraffes.

Rainbow Shops, “Ready for the Holidays”

Tess Lynch: I was looking for a Bob’s Discount Furniture regional holiday ad, because I remember being haunted by dresser-optional bedroom sets in the bleak New England winters of my childhood, when I found this. Game over. I don’t know what screams “holidays” more than an American Psycho–style tuxedoed man creeping up behind your shoulder, all cozy and innocent in its acrylic sheath of a robe, to plant a big, sloppy, grinning schnookle on you. Happy New Year! Here he is, the Rainbow Man, kissing your hand as he becomes hypnotized by your Christmas khakis; there he lurks, down by your knees, wondering what color of diamond brooch he’s going to score you for Hanukkah. Now he’s off — Wheeee! — flying away to join his gloved cousins in the Rainbow hop dance line. 1981, man. I guess nobody was really in the mood to shop, but if they were, this commercial probably would have creeped them out of it. I do sort of dig that kimono, though. What would $14.99 be today? Like four hundred dollars? That sounds about right.

The Lexus Under the Tree

Bryan Curtis: Remember those Lexus ads in which an overjoyed wife would rush outside and find a new car in the driveway, complete with bow? (It was a tie-in to the “December to Remember” sales event.) I remember watching one of those ads as a kid. My mom turned to me and said, “You are never going to hit a Christmas grand slam like that. Ever.” Boy, was she right. Thirty-four Christmases and not a car to show for it. In that spirit, I notice Lexus’s new yuletide commercial is about online dating, with the bowed car playing only a cameo. It’s like Mom’s running an ad agency or something — first meet someone nice, then we’ll talk about wheels. It’s all about priorities.

It's Flight, But on a School Bus, and You Must Watch It Right This Minute