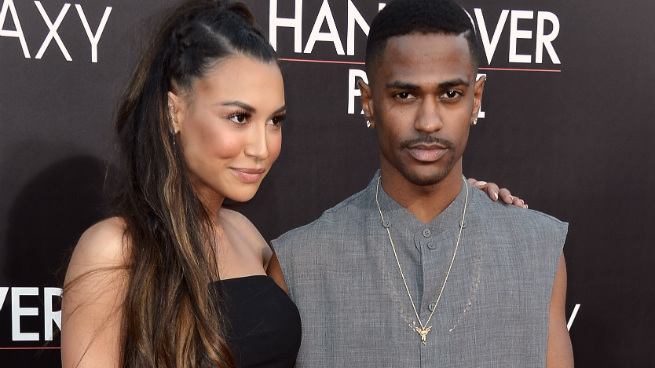 Does anyone other than me still watch Glee? Probably not, because it is an appalling television program. It used to be a fun show that integrated lively musical numbers, heartwarming lessons about acceptance, and self-aware humor to entertain a core young audience while also engaging older viewers. Now, in its fifth season, Glee has relocated to a fictional New York that has no relationship to actual New York, abandoned any attempt to depict events that might happen to a real human being, and written out more than half of its characters – including Naya Rivera, one of the most talented singers on the show, original cast member, and former fiancé of rapper Big Sean. Rivera has reportedly been written out of the season finale following a feud with producers. Blind Gossip has been alluding to this fight for a few weeks now. Though producers deny it, the no. 1 blind item site in the world says the two costars were feuding because Naya found some “very personal” texts from Lea on her fiancé’s phone. Blind Gossip has run a steady stream of posts that seem to be about Glee. The site either has an inside source or just delights in maligning the show. This is the second report this season of Lea conspiring with producers to limit screen time for her costars. Michele allegedly blocked Dianna Agron from appearing in the Cory Monteith tribute back in the fall. Perhaps this show would be less terrible if one star had less of a chokehold on its casting decisions.

Paul Simon and his wife, Edie Brickell, held hands while they appeared before a judge in New Canaan, Connecticut, this week. They were arrested over the weekend following a domestic dispute, which Brickell says is only their fourth argument in their 22-year marriage. The police report is out now, and it sheds some light on just what caused the authorities to get involved. The fight began in Simon’s home music studio. Presumably after some words were exchanged, he shoved his wife and then called 911 when she slapped him in the face. Brickell says Simon did something that “broke her heart,” and that Simon cannot “handle being criticized in any manner,” which led to their confrontation. While he may not see it this way, I think the police report is further testament to the talent and greatness of the famed musician. Somehow, he has been able to weather the breakup of Simon and Garfunkel, the failure of The Capeman, and the general criticism that comes with a long public career despite his inability to handle criticism. That is impressive! Ultimately, the judge let them go because there was not a continuing threat of violence.

Columbus Short probably won’t remember 2014 as his best year ever. He first found his way to the gossip pages back in March after a bar fight with a man who allegedly said something rude about Short’s wife. That was just the amuse-bouche. Since then, his wife alleges that he attempted to kill her and himself while accusing her of having numerous affairs. She obtained a restraining order against him and filed for divorce. The story does not end there. Short has starred on Scandal for the last three seasons, but showrunner Shonda Rhimes has a zero-tolerance policy for real-life drama. His character’s fate was unclear after the Season 3 finale on April 17, and earlier this week he confirmed he is leaving the series. And yet, there’s more. Five days after he confirmed his departure from Scandal, he broke the restraining order his wife had taken out. According to his wife, he broke into her house, from which he is banned, breaking a door off of its hinge. The jokes about Columbus Short needing Olivia Pope’s gladiators were obvious at first, but now it seems like he needs real help.

In case you haven’t heard, George Clooney is engaged to English barrister Amal Alamuddin. He designed an enormous ring for her. According to People, the stone is “ethically mined emerald-cut diamond estimated at 7-plus carats and two tapered baguettes set in platinum.” Of course, George Clooney would make sure we all knew he was not part of the blood diamond trade. He remains perfect even if he is now betrothed. She may be perfect, too. The Guardian reports that Clooney’s “family bonded with Alamuddin over their mutual interest in human rights.” The Clooney-Alamuddin holiday meal is sure to be filled with tales of injustice around the world, how much Steve Wynn is contributing to said injustice, and tons of Casamigos tequila.

The Most Fun Celebrity of the Week: Jennifer Lawrence

In case you weren’t already convinced you’d like J-Law to be your best friend, here is further confirmation. She was so drunk at the Oscars that she puked at Madonna’s after-party. Perhaps she was not included in the Pharrell dance segment for fear that her dancing could have become too vigorous. J-Law definitely seems like a fun drunk dancer. I’m sure she loves a good Rihanna club banger.

There is one person who does not want to be best friends with Jennifer Lawrence: Lindsay Lohan. In an interview with Kode magazine, LiLo made a few noteworthy statements, including saying that J-Law is “fake” and “f*cks for roles.” Lohan also mentioned that she — Lindsay Lohan, that is — has been in a relationship with a married man for a while. I guess we can assume that married man is not a director. Sources say it may be Spanish artist Domingo Zapata.

“I don’t know what to say. We were at this hotel during a very dark period of her history. It seemed pretty damn clear that she liked me. …I’d come home late to the hotel and she’d come find me. I knew which room she was in and I’d see through the window like, ‘Oh there’s another party over at Lindsay’s,’ …and she would come out to the pool area and find me. It’s in the poem: she even broke into my room one time because she was so at home there, I guess they just gave her the key. And so 3 in the morning, I was sleeping on the couch, and I open my eyes, and there’s Lindsay in my room at 3 am. And it’s like, okay, what do I do now.[laughs]…I tell about this in the poem. It sounds so nerdy…. I read her a story….I will swear on my mother’s life I didn’t have sex with her.”