The Week in Gossip: Power Couple Check-in With Nick Cannon and Mariah Carey … and Lindsay Lohan and Arianna Huffington 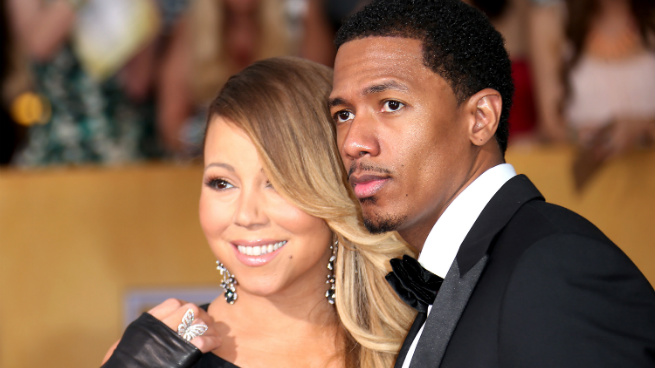 The Internet has given the world many gifts, including the gift of constant celebrity gossip. There’s a wide world out there of paparazzi photos, real estate purchases, ill-advised couples going grocery shopping, supposed children being brought into the world, and so much more. Here is a roundup of the most intriguing (and possibly true) celebrity stories of the week.

The Couple That Is Inexplicably Still Together: Mariah Carey and Nick Cannon

These two have breathtaking staying power. He hit the publicity circuit this week to promote his new record, his first since 2003. Because this is Nick Cannon, he happily talked about his sex life, past and present, on L.A.’s Power 106 morning show. We all forgot he had a fling with Kim Kardashian! Mariah Carey didn’t forget, because apparently she doesn’t even know who Kim Kardashian is. I guess Mariah doesn’t read Vogue these days. Still, she doesn’t care for her husband’s loose lips. Nick apologized for divulging his sexual history by taking a page from the Kobe Bryant playbook. It’s no purple diamond ring, but Nick gave Mariah an iced-out diamond butterfly bracelet for their anniversary. She continued to celebrate her big day by going to Disney World with her incredibly adorable children. Why does this family love Disney so much? You may remember that they renewed their vows on their fifth wedding anniversary at Disneyland last year. Their sixth anniversary is quickly approaching on April 30. I humbly suggest they celebrate at Epcot this time. Life is not all about fairy tales and princesses. Start teaching dem babies about science and the world early on.

Most Alarming Brawl of the Week

Even if you don’t know Columbus Short’s name, you may be familiar with his work. He appeared as a dancer in You Got Served, he choreographed Britney Spears’s 2004 tour, he possibly dated her, too, and, most important, he starred in the classic film Stomp the Yard. If you’ve thought about him in the last week, you either watch Scandal or read about his recent bar fight. Short plays Harrison Wright, one of Olivia Pope’s most trusted henchmen, but apparently his job may be in jeopardy. He allegedly punched a man after the guy supposedly said something about Short’s wife. A warrant was issued for his arrest on March 15 and Short turned himself in, but the victim is declining to press charges. While they work on an out-of-court settlement, there’s another issue to worry about. HipHollywood is claiming that Harrison could be written out of the show because creator Shonda Rhimes holds a firm no-bad-press policy. If I were a fan of Scandal, I’d be very concerned. Isaiah Washington was written out of Grey’s Anatomy because of his bad behavior. Katherine Heigl started having sex with a ghost and left the show after her disagreement with Rhimes. At least Scandal fans can take solace in the fact that the show, just in Season 3, has already jumped the shark – around the time that Liv, Fitz, and Mellie retreated to the bunker. Maybe Short should get out now, anyway.

Most Incriminating Social Media Activity of the Week: James Franco Is Sketchy

Waiting outside a stage door or a hotel to see a celebrity is generally a futile endeavor, unless James Franco is involved. A 17-year-old Scottish girl named Lucy waited for him outside of the Of Mice and Men theater, where she took an Instagram video of him. She posted it and tagged it per his instructions, which led to fairly extensive messaging. It began on Instagram and moved to text. (See all the screenshots here.) He seemingly went to great lengths to prove his identity, sending her two photos of himself.

There are just so many questions here. First, is this just an April Fools’ joke? With creative pursuits as varied as Franco’s — from his earnest NYU film days, to his comedies with Seth Rogen, to his truly brilliant performance in Spring Breakers, to his baffling turn as Oscars host, to his side job as a short story writer — it’s hard to gauge what parts of his portfolio are real. But assuming these screenshots are not part of an elaborate hoax, does Franco really have to work that hard to find a random girl? Why is he so intent on this Scottish teenager? Does he check all of his Instagram notifications or only when he sees pretty girls? Can we assume that Instagram messaging was introduced exclusively for creepy celebrities? Franco looks surprisingly older in his selfies — a man worn by time and the exhaustion of pursuing strangers.

Triangulating the Truth: How Much Money Is at Stake in the Paltrow-Martin Divorce?

You may recall that Goop and Chris announced their divorce at the worst time in the tabloid life cycle: Tuesday afternoon. Too late for the next day’s magazines, and too early for the following week. Yet, two intrepid publications found a way to get the story some cover real estate by focusing on the financial ramifications. According to the cover of Life & Style, this is a $140 million divorce. Considering that Coldplay’s previous tour for Mylo Xyloto grossed $147,188,828, and the one before that for Viva La Vida grossed $126,000,000, the Life & Style estimate seems low. Star boldly suggests there is actually $280 million in assets to split, and the magazine also enumerated the most discussed lovers that may have caused the divorce. Her: Brad Falchuk, Tim McGraw, and Matthew Morrison. Him: Alexa Chung, Kate Bosworth, Helena Christensen. This is nothing new. Us’s lead story was about the great breakup of 2014, but, alas, no financial details. The true lede, though, should be about the former couple’s ability to control their narrative. Over the last nine days, there have been few new revelations about what broke them up. “Conscious uncoupling” was distracting enough to keep truth-seekers from digging too deep.

Things are not looking up for Lindsay Lohan. No one is watching Lindsay, her OWN TV show. The show debuted to 693,184 viewers, but dropped off to 527,000 in its second week. This is especially problematic because Lindsay is broke. OWN paid her $2 million, but she has already squandered the portion that did not go to her “team.” Over the weekend, she tried to make a $300 purchase at Rag & Bone in New York, but both credit cards she tried were denied. I’m going to assume Arianna Huffington took pity on her, because why else would Lilo attend a dinner party with the Huffster, Josh Radnor, meditation guru Bob Roth, and her father Michael? Maybe Radnor and Lohan can sync up for an indie film. They’re both unemployed right now.

Magazine With the Most Sensational Tabloid Headline This Week: Life & Style

The lead story reads “Miley’s Nightmare: Pregnant & Scared.” For all the exploits that Miley publicly participates in, she has never seemed reckless. Every move along the Bangerz publicity trail and accompanying tour has seemed calculated and deliberate. Show us the pregnancy test.

Most Intriguing Blind Item of the Week: the Mystery Assistant

An anonymous former Hollywood assistant gave a first-person account to New York magazine’s The Cut about her experience working with a “Hollywood household name.” The assistant details the horrors they went through: unknowingly running drugs for the boss, being on call for chauffeur duty, breaking up with the boss’s boyfriend, going to Starbucks at 5 a.m., driving the boss to a palm reader whom the boss referred to as a therapist. The details provided make it difficult to discern the boss’s identity, but it’s definitely a woman who has a kid but no spouse. The assistant was responsible for keeping up with the news and book releases in case there was a good story for the boss to option. Apparently the boss had a lot of STDs, and a lot of boyfriends. So she was a new-agey stoner who produces, but maybe not exclusively. There’s a reference to being on set, but in what capacity is unclear. So it’s either a female actor who produces (or aspires to) or a multihyphenate who may write-direct-produce. Kate Hudson appears to be a popular guess among commenters, but I think that gives her too much intellectual credit.