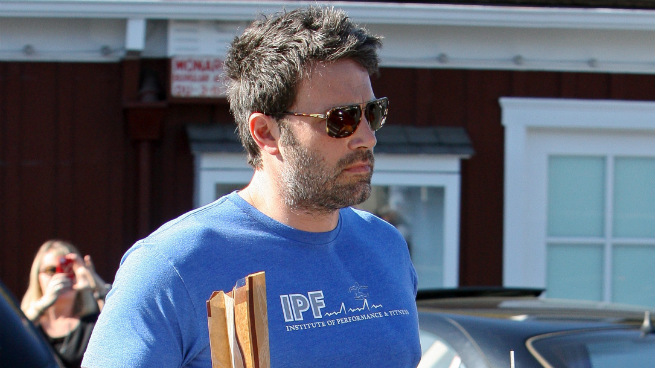 As you may recall, Affleck was expelled from the Hard Rock Casino in Las Vegas because he was counting cards earlier this year. It seemed like an isolated incident, easily laughed off as just some Affleck high jinks, not evidence of the behavior that also led him to participate in a high-stakes poker ring before he became a family man. Alas, Star and Radar Online claim that Affleck is frequenting casinos in the Detroit area while he is in town to film Batman v Superman: Dawn of Justice. Radar first wrote last month that he was flying solo at blackjack tables, only playing with $500, $1,000, and $5,000 chips. For a multimillionaire Oscar winner, that doesn’t seem so bad. If it’s not illegal, what’s the problem? The latest report, though, makes Affleck’s gambling seem more dire. The (questionable, at best) anonymous quotes from Star this week describe Affleck as bedraggled, and he was once again kicked out. He was supposedly asked to leave the Caesars Windsor Hotel and Casino in Windsor, Ontario, after just 20 minutes. Jennifer Garner and their kids were supposed to visit Affleck on location, but, allegedly, she has canceled her trip in anger.

Maybe Affleck is not the problem. I think they may just need more activities on the set of Batman v Superman. A freakishly buff Henry Cavill has been spotted all over the Detroit area, very willing to take photos with anyone who asks. Why is he so available and why does Affleck have so much time for the casinos? With all the free time, they should make the movie more quickly and bump up the release date to 2015.

Franco wrote a story for Vice about not having sex with Lohan, despite the fact that he appeared on her handwritten list. It’s labeled fiction, but to say it’s thinly veiled would be an overstatement. The veil is completely transparent. In the story, fictional James is staying at Chateau Marmont while his house is under construction. Fictional Lindsay tries to break into his room. Eventually he lets her in and reads two J.D. Salinger stories to her. Here are the most salient quotes:

“‘We’re not going to have sex. If you want to come in, I’ll read you a story.’” — Fictional James

“‘He didn’t fuck me, that shit. And what was he doing there anyway? On my night. My night with Meryl [the premiere of A Prairie Home Companion], my night when everything was right, when I got everything I wanted. Almost.’” — Fictional Lindsay

So Franco wants you to know he did not have sex with Lohan. Less clear is what to make of the quotes attributed to fictional Lindsay. Postmodern literary scholars may argue that Franco himself believes the apex of LiLo’s career was her appearance in Robert Altman’s A Prairie Home Companion. However, that would be giving Franco too much credit. He probably once heard LiLo say that was the best night of her life, which would be sad because everything having to do with Mean Girls was obviously superior.

Arts and Crafts–Inclined Celebrity of the Week: Taylor Swift

We’re in our 20th month of the Taylor Swift Red media cycle. Yes, Red came out in calendar year 2012. In that time, she has “dated” Harry Styles, flipped a house adjacent to the Kennedy compound, bought an apartment in New York, and toured the entire world. Tonight the tour ends in Singapore. For her final act, Taylor has announced her new hobby: needlepoint. She made a Drake-inspired piece for her dear friend Ed Sheeran, who opened for her last summer on the North American leg of the tour. Sheeran is amid his own publicity blitz in support his forthcoming album x. He is the first subject of the new MTV documentary series Nine Days and Nights, and in his episode, he shows off the aforementioned needlepoint, which reads “Started from the bottom.” It also has a quote from Ed and rudimentary renderings of the two tourmates. She even worked in speech bubbles. Ed’s says “Lego” (as in his tune “Lego House”) and Taylor’s says “cats.” As far as I know, her affection for the house pet has not been written in to any songs, so she must just be referring to Meredith.

But I thought everyone does this? http://t.co/PrPsC33Wnl

Even though she claims her music is her at her most confessional, this needlepoint is the purest metonymic expression of who Taylor Swift is. The craft itself is a straightforward and wholesome activity to appeal to the tween set — the Swift base — yet it has distinct hipster appeal. There’s an opportunity to be subversive, but she retreats away from the line. And of course, Taylor couldn’t let her quirky hobby exist solely as an Easter egg for the young girls who watched the show and fodder for an eventual BuzzFeed quiz about the Sheeran/Swift friendship. She had to pretend to call herself out for being ever-so-slightly offbeat. This is textbook Taylor.

One benefit of the World Cup is the heightened relevance of Europe’s finest WAGs — wives and girlfiends of the footballers. This week’s standout is Fanny Neguesha, who boldly converted her G into a W-to-be on the eve of the World Cup: Balotelli decided three days before the matches began was the optimal time to propose to his girlfriend. She said yes! As any 23-year-old would, he announced it via Instagram. Fanny, a Belgian model, is with the team in Brazil right now. Italy manager Cesare Prandelli allowed the WAGs to travel with the team, even though it hasn’t won since September.

Fanny and Mario’s relationship has survived several challenges — perhaps none greater than the time last year when he told the players of Real Madrid that they could have sex with Fanny should they beat Borussia Dortmund. It was a long shot for Madrid, but she dumped him after that nonetheless. Of course they got back together, only to break up again in March. She messaged it by updating her Instagram bio to say “single.” There’s just no other way to do it. Fanny and Mario’s engagement comes at a moment of familial unrest for Team Italy. Andrea Pirlo and Gianluigi Buffon are both in the process of getting divorced. Let’s hope that Fanny is the emotional rock for the whole team as she is for her main man. All we have to do is monitor her social media to know what’s going on.

Suspect Couple of the Week: Olivia Munn and Aaron Rodgers

Us Weekly wrote last month about new couple Olivia Munn and Aaron Rodgers, though it’s just been a rumor since then. This week he went to the Newsroom set, where they were photographed kissing. They’re kind of color-coordinated. Apparently we should expect to see a lot more of them until press for her new movie, Deliver Us From Evil, dies down.

If you know who Jennette McCurdy is you (a) are a Nickelodeon viewer, (b) have a child who watches Sam & Cat, or (c) avidly follow the life and times of lovable Pistons center Andre Drummond. Last year, he tweeted at McCurdy until he got her attention. They went on a few dates; they were photographed at The Grove, Los Angeles’s designated pedestrian area; they recorded Vines for and about each other; and McCurdy even took to the pages of the Wall Street Journal to discuss her thoroughly modern romance. And then it turned out it was all a lie. She embarrassed him on the Pete Holmes podcast, saying he was a bad kisser and only went out with him to entertain her friends. This was the beginning of a very steep drop for Jennette McCurdy.

Since then, racy (honestly not that racy) photos of her leaked on the Internet, which may or may not have led to her skipping the Kids’ Choice Awards, an award show on her own network. At the time, she claimed she boycotted because of a feud with Nickelodeon. Then, rumors began to circulate about McCurdy’s relationship with rising star Ariana Grande. The feud with Nick was also a feud with Grande: McCurdy wanted more money, as much as her costar. Of course, both parties denied it at the time. And now, McCurdy has taken to social media to stoke even more rumors.

She wrote a very lengthy post on TwitLonger (the longform, confessional social media platform preferred by boy banders) to an unnamed friend (former friend) explaining why she was ending the relationship. The note offers valuable insight into how young women categorize their friendships: “Fast forward to a year or so later and we were back on the map as friends. Not those first tier friends who tell each other everything and who would jump in front of a bus for each other, but solid second tier friends I would say.” She goes on to expound on what friendship means: “We aren’t better friends because being friends with you takes the “better” out of me. In fact, I might possibly be the worst version of myself when I’m around you.” And she even summons true poetry: “As for what happened to our friendship, it faded once through happenstance and it is happening this time through my stance.” Given Grande’s steady position atop the Billboard 100, it’s hard to imagine Nickelodeon will side with McCurdy. Luckily, she may have a second career in her future as a writer .

The Movies of 1994: Keanu’s Magic Quasi-Buddhist Bus in ‘Speed’