The Movies of 1994: Keanu’s Magic Quasi-Buddhist Bus in ‘Speed’ 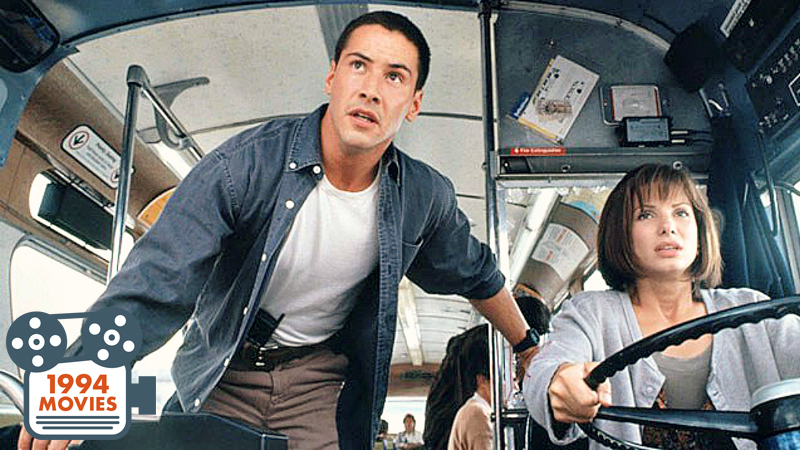 In the year 1994, the movies were great. Greater than usual. Blockbuster or indie, rom-com or action thriller, there was something indelible about so many of them. Throughout 2014, Grantland will look back at some of the most memorable, beloved, and baffling releases of that magical time around their 20th anniversaries. Today: Alex Pappademas on Speed, released June 10, 1994.

Jan de Bont’s Speed, released 20 years ago this week, cost about $30 million to make. Some data points, for context: $30 million is how much Michael Bay says his decision to shoot in 3-D added to the rumored $195 million budget of 2011’s Transformers: Dark of the Moon. When Neill Blomkamp made 2009’s District 9 for $30 million, it was viewed as a kind of magic trick; news stories about the film invariably used the phrase “low-budget” to describe it. And if you need a more apples-to-apples comparison, consider that this spring’s Need for Speed — another vehicular-stunt showcase with no high-priced stars and minimal CGI — reportedly cost $66 million.

1994 was a transitional moment for the American action film, and not just because you could make a viable studio blockbuster for the summer-movie equivalent of Clerks money. Icons from the ’80s like Arnold Schwarzenegger and Sylvester Stallone were still reliable box-office draws, but leaner years lay directly ahead for both. Their B-movie schlockcessors Jean-Claude Van Damme and Steven Seagal were also sliding into self-parodic eclipse — and they were technically late-’80s stars, anyway. Almost two years into the Clinton era, the question of what an emblematically ’90s action hero might look like remained unsettled, which meant all kinds of unlikely actors got to try on the mantle. Would the future of the genre look like Meryl Streep, chiseled and biker-shortsed in The River Wild? Keenen Ivory Wayans in A Low Down Dirty Shame? A young Hilary Swank learning to be The Next Karate Kid? Charlie Sheen, playing a skydiving instructor (and self-proclaimed “flying penis”! Named “Ditch Brodie,” no less!) in Terminal Velocity? The only obvious pick-to-click was Brandon Lee, and by the time The Crow came out, he’d been dead for more than a year.

Only in this context could Keanu Reeves seem like a sure-thing action hero. By 1994, it was clear Reeves was a movie star and less clear what kind of movie star he wanted to be. In 1991 he’d made a credible action-movie debut as Johnny Utah in Point Break, but he’d also played a gay hustler in My Own Private Idaho and Ted “Theodore” Logan again, beating the Reaper at Twister in Bill & Ted’s Bogus Journey. Two subsequent period pieces — Much Ado About Nothing and Dracula — mostly revealed his now infamous lack of facility with non–San Dimas accents. And in the months before the summer of Speed, he’d showed up onscreen as the gentrified Mohawk Indian painter Julian Gitche in Gus Van Sant’s fascinatingly misbegotten Even Cowgirls Get the Blues and an androgynous Siddhartha Gautama in Bernardo Bertolucci’s Little Buddha. In interviews, he name-dropped Foucault, Nietzsche, and Camille Paglia and quoted Fugazi songs about consumerism to explain how he felt about stardom, doing all the James Franco dance steps a decade before Franco did. “Reeves appears more like a slacker poet than the next great action hero,” wrote Entertainment Weekly’s Melina Gerosa, upon meeting him at a lesbian coffeehouse; he showed up with a leather-bound book containing his handwritten notes on Hamlet, because of course he did.

It’s said Bruce Willis and Tom Cruise turned down the part of Jack Traven, an LAPD officer who boards a Santa Monica city bus that a madman has wired to explode if it slows down. So did Stephen Baldwin and Richard Grieco, who’d later admit to Movieline that he thought Graham Yost’s original script “sucked.” De Bont says he cast Reeves for his “innocence, sweetness and romantic quality,” which is not traditionally what you go to Cruise or Willis for; Reeves signed on only after a now-legendary uncredited rewrite by Joss Whedon transformed Traven from a wisecracking cowboy cop in the John McClane mold into a more earnest, thoughtful problem-solver caught up in an impossible situation. There are still traces in the finished movie of the Bruce Willis flick it might have been, especially at first. An elevator is in danger of falling, and someone asks if there’s anything that can stop it. Reeves — sporting a newly buff Gold’s Gym body, a buzz cut, and a light sweat-sheen — stops chewing gum long enough to quip, “Yeah — the basement.” It’s a funny line, but in the context of what Reeves does as Traven in the next 90 minutes, it rings retroactively false, a concession to the rules of the genre. 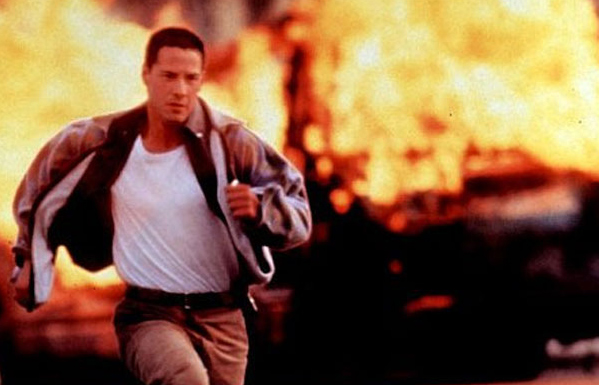 Cool guys don’t look at explosions; cool action-movie guys take command of a situation through physical force, borderline-nihilistic fearlessness, this-time-it’s-personal rage-channeling, and attitudinal one-liners. Reeves’s performance as Traven scrambles those masculine codes so thoroughly that he almost belongs in a conversation about the emergence of the female action hero, also a mid-’90s phenomenon. He exhibits toughness and bravery when required, but it’s his traditionally “feminine” qualities — his sensitivity, his compassion, his capacity for lateral thinking — that carry the day. When a confused passenger pulls a gun, Traven defuses the situation by persuading him that they’re all in this together; later, when an argument breaks out on the bus, he stops it by calmly placing his hand on one man’s shoulder instead of knocking him out. And he’s able to focus on the human factors in this crisis because of the partnership he’s forged with Sandra Bullock’s Annie, which — at least until it takes the inevitable romantic turn — is itself a subversion of the male savior/female victim dynamic traditionally asserted in movies like this one. Here it’s the woman who operates heavy machinery and the man who sees to her emotional needs. “Are you all right? Is there anything I can do?” he asks, after Annie watches the old lady get blown up after attempting to jump to freedom.

Slavoj Žižek once wrote an essay that posited the myth of Medea, the story about Keyser Söze killing his own family in The Usual Suspects, and Speed’s “shoot the hostage” scene — in which Dennis Hopper’s mad bomber takes Traven’s partner Harry (Jeff Daniels) hostage and Traven wounds Harry to take him out of the equation — as metaphorical models for radical political action rooted in total self-sacrifice. There’s something Buddhist about that concept. The scene in which Traven shoots Harry is the only time Reeves fires his gun at another person in Speed, and there’s something Buddhist about that, too, especially if you view Hopper as less the antagonist and more a symbol of Traven’s karmic predicament. “It’s based on saving these people, it’s not based on killing the bad guy,” Whedon told the Huffington Post on Tuesday. “I look to the progression to films like ‘The Matrix,’ and I think there’s the idea of the peaceful warrior germinating in [‘Speed’], and I think that’s important.”

De Bont went on to make Twister and Tomb Raider: Cradle of Life, more action movies with active, non-damsel-ish female protagonists or co-protagonists. He also made Speed 2: Cruise Control, because he was contractually obligated to do so. Reeves wasn’t, so he was free to wander off for most of the next half-decade, ping-ponging from willful weirdness (Johnny Mnemonic) to crud without the courage of its convictions (The Devil’s Advocate). Then came the Matrix movies, in which all that Buddhist subtext became the text. Reeves’s Neo and the rest of the crew of the Nebuchadnezzar dressed in monkish sackcloth and ate future-gruel when they weren’t liberating humanity from illusion, and Keanu had a Cronenberg-ishly vaginal data-port in the back of his neck. It was an action movie whose lead role demanded a slacker poet, a contradiction only an actor like Reeves could resolve.

'The Interview' Trailer: Seth and Franco Want to Assassinate Kim Jong-un, Because Why Not?