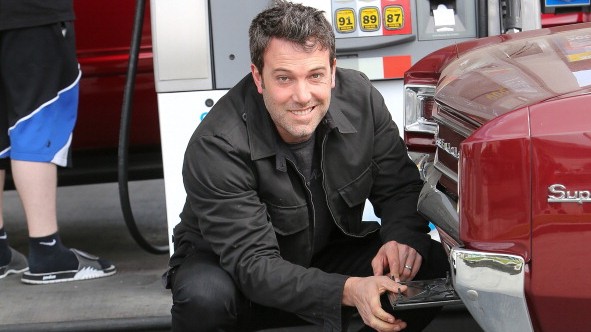 Last weekend, TMZ claimed that Ben Batman Affleck was banned the Hard Rock Casino in Las Vegas for card counting. If this sounds believable and vaguely familiar, it’s because this is not Affleck’s first gambling scandal. Back in 2011, tabloids reported that he lost $400,000 playing in a secret poker circle with ties to the Russian mob. That was old Affleck — the guy who dated Jennifer Lopez, the guy who played Daredevil. I thought new Oscar-winning, married Affleck had graduated to more glamorous ways to lose a ton of money. He has undergone a breathtaking image reversal in the last few years, thanks to adorable photo opportunities with his three kids and participating in some high-quality movies. (The Oscars definitely don’t hurt.) A card-counting scandal certainly undercuts much of that goodwill. TMZ may have exaggerated the situation, though. The L.A. Times reports that while the Hard Rock did ask Affleck to stop playing blackjack, he was not banned from the hotel and casino. Card counting is not illegal in Nevada. Affleck looked perfectly happy yesterday, anyway.

I don’t really understand how the dynastic wealth of the reigning Windsors of the United Kingdom works. How do they generate income to cover Duchess Catherine’s wardrobe or Price Harry’s lavish lifestyle? It’s mystifying, yet we can all assume they have enough money to buy a first-class seat on a flight from Memphis to the U.K., right?

That’s Prince William. He and Harry were in Memphis for Guy Pelly’s wedding. Pelly is a U.K. tabloid staple, credited for getting the royal brothers to turn down for what. Maybe that explains why William was flying coach. The crown likely does not approve of Pelly and certainly will not fund any trips that involve him. (I just made that up and used “certainly” to make it sound British.)

90210 Nostalgia Nugget of the Week: Jason Priestly on Tori Spelling

Jason Priestly has been engaged in a press tour in support of his new memoir. He’s releasing the good parts slowly. The Hollywood Reporter was gifted the abridged story of Priestley and Brad Pitt’s friendship, circa Thelma & Louise. Priestley and Pitt were roommates in North Hollywood. Pitt would sneak off to visit then-girlfriend Geena Davis, who refused to go to his place. The funniest nugget of Priestley’s, though, is about Tori Spelling. She had a public feud with her mother over money in 2006 after her father, Aaron Spelling, died. Perhaps she was faced with a liquidity crisis, because in 2005, she sold Priestley’s wedding invitation for $5 at her yard sale. Priestley found out about his friend and costar’s entrepreneurial spirit via the evening news.

Too Sad to Joke About This Week: Mekhi Phifer in Bankruptcy

Mekhi Phifer has filed for bankruptcy and is $1.3 million in debt. According to TMZ, his assets include including a leather bed, a 12-year-old Segway (valued at $1,500), one shotgun, and two 9-millimeter pistols. Many of the news reports credit his six-year turn on ER as his career-defining role, but he was on post-Clooney and mostly post–Anthony Edwards. Can an actor be defined by a role that came after the show’s peak? I’d say his most important contribution was starring in the “The Boy Is Mine” video in 1998.

The Visor and the Beret