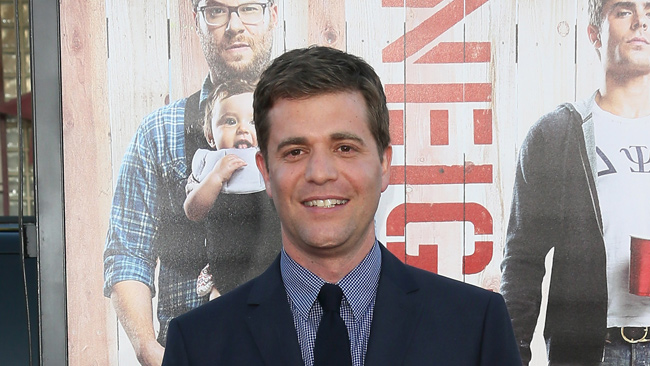 Nick Stoller’s a rare director: Somehow he’s carved a niche for himself making raucous studio comedies that gut-punch your funny bone without feeling like they sold their souls for a fart joke. For all the gross-out gags and profane humor, every movie he makes shares a palpably human heart. From Forgetting Sarah Marshall to Get Him to the Greek to The Five-Year Engagement, Stoller roots the broad comedy in instantly relatable experiences: getting dumped by the girl of your dreams; struggling to make your name in your job; learning to navigate the compromises necessary for a relationship to survive. In one scene you can have a psych professor doing parkour in a back alley; in another, a couple shares an earnest (and hilarious) conversation about conflicting life dreams. The same guy who helped reboot The Muppets also gave us Aldous Snow and Diddy’s “mind-fucking” speech.

But his latest film is definitely not The Muppets. Neighbors lit up SXSW with its frat vs. family showdown in which new parents Seth Rogen and Rose Byrne go toe-to-toe against a half-psychotic Zac Efron. And just because there’s a baby in the equation, Stoller doesn’t hold back from the giant custom dildo fights, mushroom munching, and Spring Breakers vibe. Nonetheless, the movie holds onto its humanity. It’s hard to say this about a movie where frat boys hotbox a house, but Neighbors still manages to feel real for all the lewd Looney Tunes comic action. His movies, like Stoller himself, share an irrepressible humanity that comes across even in the highly curated environment of a publicist’s conference room. Suffice it to say, talking with Stoller about Neighbors was as casually fun as swapping dick jokes with an old college roommate — which is incidentally also a good way to describe his movies.

You go some pretty crazy places in Neighbors, especially with a baby in the mix. Was there a studio exec over your shoulder analyzing each joke, making sure you weren’t going too far or pissing anyone off?

Click here for all of our interviews with fascinating people from the worlds of sports and pop culture.
Nah. Universal’s awesome; they’re really hands off. Their notes are always macro notes. And I have kids: You don’t want the audience to think your characters are unlikable or irresponsible. We shot a ton of stuff with the baby, but the audience very quickly doesn’t care. You see [Byrne] with the baby monitor, you get the gist. Actually, we got the opposite note. When one of the executives, Erik Baiers, saw the dailies, he said, always shoot the babies. With babies, you can have your main characters do horrible stuff and you cut to a baby smiling and it’s fine.

Say having Seth Rogen eat a bag of mushrooms?

Right. But they couldn’t both be messed up in the scene and have to watch a baby. So, Rose had to be sober during that scene.

So there was a little bit of “parental responsibility math” you had to do?

Yeah, because the audience would be like, “They’re just jerks.” Also, the other thing I learned a while ago is you can’t ever have a baby crying as a plot point. It’s primal. I mean, you can have a baby crying sometimes. [Laughs.] We do a really super cheap move: When they’re fighting, the baby actually did get upset and we put it in the movie and the audience literally goes awwwww. But it’s so cheap.

It still amazes me what you got away with in what is this weird romantic-frat comedy hybrid.  You do some pretty …

I think, even more so now, audiences want to be shocked. Universal literally had no issues with anything we shot. ’Cause they know if it doesn’t test well, we’ll take it out. But we did have stuff that was too gross. But it’s always weird what’s gross.

We had shot a whole thing with the babysitter — we actually cut this right away when we screened it for friends and family — where the babysitter is this creepy guy who drinks all of Rose’s breast milk.

Actually, it was pretty fucking funny when I watched it. While they’re partying, he’s drinking all the breast milk. The audience rejects it because it’s like, “Oh they hired a shitty babysitter.”

Not ’cause he just downed a bottle of breast milk.

Not even! It’s all character stuff. But it was really funny, just so gross.

I read that someone made cheese out of human breast milk.

Oh, they do all kinds of things. But really? So gross.

It’s funny, your films seem to be building a progressive chronology of life stages.  Do you look for projects like that: What’s going on in my life right now?

Yeah, it’s always like I’m talking about my life two years ago. You know, I think I do subconsciously try to do that. With Sarah Marshall I was just really excited; but with Get Him to the Greek, Jonah’s story was my story a few years before. Five-Year Engagement … I wasn’t in a five-year engagement, but the things they were dealing with was the stuff I found interesting at the time.

You never had to fight a professor who’s a covert ninja?

Please tell me Rhys Ifans actually did all those flips through the back alley.

Hah, no, we got a parkour stunt guy who did it. That just always made me laugh that he would be into parkour. But anyway, I do always look for stuff like that. I need an emotional connection more than anything. That’s the most important thing.

It must help with the directing.

Yeah. Nothing I’ve done is directly autobiographical, but there’s stuff I can draw on. With this movie, when Evan Goldberg called me up about it, I immediately knew what my way into it was. I had a nervous breakdown twice: once when I got out here from college and once when I had my first kid. It feels the same.

Nervous breakdown sounds right. The difference is after college you can drink yourself into a stupor. With a baby you have to be sober.

They’re both horrible in different ways, I find. There’s more of a sense when I graduated of free fall. Because you just don’t have anyone. But with a baby it’s a different free fall. But it’s true: You can drink after college. Now when I think about those post-college years, I think they were really fun. But they weren’t really! I was drinking myself numb. But those scenes with Seth and Rose in bed, those were literally what my wife and I said to each other. That’s a conversation we’ve had about our life.

What’s also interesting to me is this movie is also half Animal House, even though it’s really from Seth and Rose’s point of view.

Something that’s always a challenge with each movie is point of view. It’s really important, and you usually find it when you’re cutting your movie. In this movie we started with a split point of view. I had this image in mind that they’re in bed, kissing each other, and then you show flash cuts of Zac Efron, showing different pieces of his body, then you introduce the frat guys and they have this big fireworks battle and blow up their house. And we shot this entire thing; it was really complicated. Then we screened it and it just wasn’t working. One reason it wasn’t working was there were too many parties. The other reason was that we really were in Seth and Rose’s POV. The instant we cut that out and introduced Zac from Seth and Rose’s POV, the whole movie flew. It was a real lesson. That’s something I wouldn’t have known without shooting all that stuff.

It’s tricky doing a split point of view. But you kind of did it in Five-Year Engagement?

Yeah, but we had them immediately in the first scene having a different take on how they met. And in the romantic comedy you have a history of dual point of views.

Exactly. But with this one, Seth and Rose are the same character so they share the same POV.

By the way, the giant frat party looks nuts. There was clearly some fancy footwork there; how did you shoot that one?

Thank you. I learned a lot about shooting parties from Get Him to the Greek. On this one, I worked with [cinematographer] Brandon Trost, and I wanted it to be really dark. We had this idea for it to be a black-light party, and I figured out if you put the camera low it feels more epic. Then I handed out GoPros and iPhones and tons of crappy cameras to the extras and it made it feel really epic. Brandon’s an awesome DP and my editor Zene Baker’s fantastic and we created a cutting pattern to that sequence. I call it a dumb heist: It’s like a clock. When Zac goes down that dark hallway, Zene Baker did this amazing job of cutting the music to this awesome Flo Rida song that hasn’t even been released yet.

I felt like I was instantly transported to Spring Breakers.

Oh yeah, Spring Breakers was something I looked at. Enter the Void is another.

There’s a movie I’d never imagine you citing as an influence.

It’s the craziest movie. That director’s both a genius and insane.

Speaking of, who knew Zac Efron had that intensity?

I felt it. You get a vibe; I’d seen him in 17 Again and I had a feeling he could pull this off. He was excited to get to go dark and be weird. But he was really good at improv, at being in the moment and being natural, especially considering he was nervous around Seth because he’s a huge fan. He grew up with all Seth’s movies. Sometimes an actor who’s not a comedian will try to improv jokes, which can be bad. But he didn’t, he was just in the scene.

Your movie actually makes me want to see a remake of Taxi Driver with him.

And yet so dreamy. What’s that line in the film?

Oh: “He looks like a gay man designed him in a laboratory.” But it’s true! At first I didn’t want to do gay jokes, but then I thought, honestly, we’re on the side of the gay community with this one.

So what’s your dream project? Or what stage of life do you want to make a loud, crazy comedy about next?

You know, I don’t know. I kind of just exist from project to project. The kind of movies I’ve always wanted to make, I’ve gotten to make. I love all kinds of movies but I’m really drawn to hard comedies. I love romantic comedies and high-concept comedies. I could imagine trying something with more action in it. The next movie I want to do is this movie for Seth and Kevin Hart that my friend Rodney Rothman wrote that’s really hysterical. Right now it’s called Black and White: It’s about the first white cop/black cop pairing in history. It takes place in the late ’40s and they have to infiltrate the jazz scene and bust jazz musicians for weed. It’s kind of Baz Luhrmann–y — not a real period piece, it’s heightened. But I’m both scared and excited for that.

Is that your Chinatown?

Yeah, it’s going to be insane.