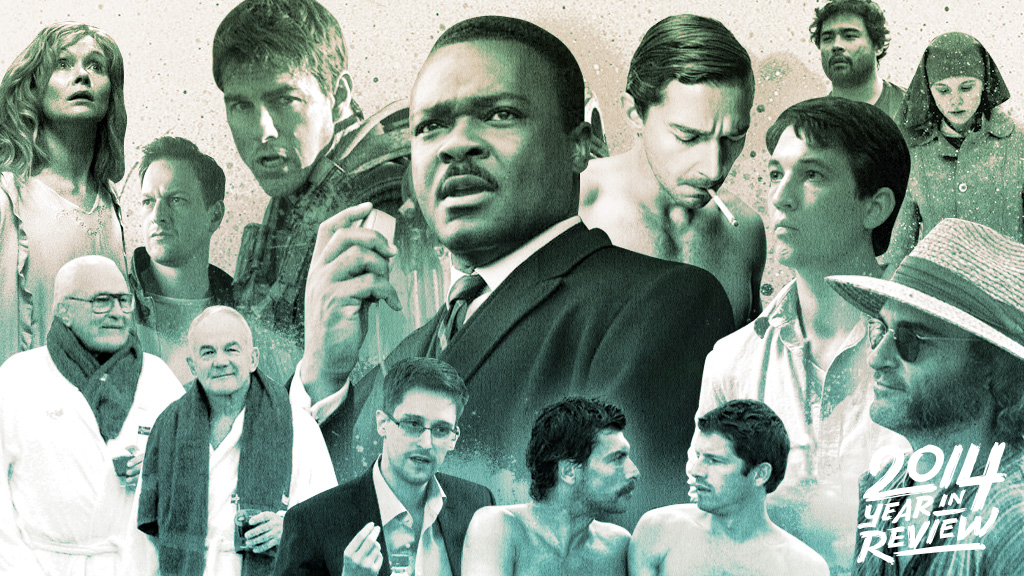 10. Stranger by the Lake

What happens when a killer comes to a small gay nude beach in the south of France? Here, a kind of Hitchcockian thriller spreads across the film and soaks the atmosphere like blood into a shirt. The terror of Alain Guiraudie’s film comes first from the intimacy of the scale. Even once a detective starts nosing around, the film’s triangle configuration of men — one portly, one needy, one hot — tightens, like a noose. But you’re scared that, in introducing the specter of death, Guiraudie has dared to fashion a metaphor for the risks of sexual attachment.

Lars von Trier strikes again, and, again he leaves a crater on the nature and meaning of erotic freedom. Some people cried bullshit. But I wonder if those people made it to the second half, where all the talk and the flashbacks and the model who barely plays a young Charlotte Gainsbourg seducing Shia LaBeouf fall away, and an adult woman’s sexual odyssey moves to the foreground. This is the first of von Trier’s collaborations with an actress that feels forged in a feminist partnership instead of male exploitation. Gainsbourg transcends a farcically ridiculous, mythological premise. She repossesses degradation, and, in the process, changes von Trier’s understanding of what a woman is and how inefficiently brutal some men can be.

Jennifer Kent seems to have tired of horror-movie parenting. Lots of visual gobbledygook, none of the psychological possibility. When the title character from a children’s book takes over their lives, the film’s mother and son are already nervous, overtired, emotionally disturbed. It’s possible the Babadook is just some manifestation of trauma or lack of sleep. What’s ingenious about Kent’s movie is that she doesn’t bother making a distinction. In fact, the more willing you are to reach for a rational explanation, the more terrifying her movie is.

Damien Chazelle’s virtuosity is blistering. When Miles Teller’s music-school student dunks his bloody hand in a pitcher of ice, it’s tempting to ask, “Where’s mine?” Chazelle works you out, throws you around. His sense of form and style excites you. But amid the movie’s combustible energy is a shrewd screenplay on the discourse of ambition — its limits, its requirements, its side effects. Does greatness necessitate hurled chairs and expectorated rants? Is abuse abusive when the abusee thinks he’s thriving on it? Chazelle appears to be of two minds. That ambiguity harmonizes perfectly with his unambiguous talent.

All of our critics’ best-of lists, the Year in Holy S#!t sports moments, and our series on What We Saw in 2014.
In which the smug, toothy version of Tom Cruise must be retrained to function as the ultracompetent, super-right version. But it’s not just the brilliance of the in-joke that sends Doug Liman’s movie over the top. It’s the precision of the craftsmanship that’s committed to sustaining and building upon that joke. In a sense, this is the best mid-tier spectacle Hollywood can offer, with two stars near their pinnacles (Emily Blunt plays Cruise’s impersonal trainer). Once upon a time, we could take something like this for granted (another will be along in 10 minutes), but these sorts of action movies are rarely this smart and inspired. Also: We don’t have 10 minutes anymore.

There’s still more to minor-key Paul Thomas Anderson doing minor Thomas Pynchon than there probably ought to be. Anderson sticks with the novel’s counterculture detective plot — he even tries to follow it. In doing so, he amplifies both the book’s comedy (half the cast are doing gonzo stuff) and the disillusionment (half seem wistful). His detective thinks he’s looking for missing people. Meanwhile, some elemental aspects of the American cultural psyche have begun to slip away. Anderson’s movie is looking for that.

A voluble Texan (Earl Lynn Nelson) drags his down-in-the-dumps Australian ex-brother-in-law (Paul Eenhoorn) all the way to Iceland. They drink and do drugs. They pick up much younger women. But the gentleness of the expedition moves you. Writer-directors Martha Stephens and Aaron Katz make perfect choices and have an uncanny sense of human tonal comedy. Nelson could have veered into parody or something grotesque, but he radiates what the movie is able to make contagious: the biggest, happiest love.

Nothing this bound to a single hotel room should be either this nerve-racking or this distressing. But Laura Poitras’s in-the-moment documentary of Edward Snowden’s release of the CIA leaks triggers a sense of moral claustrophobia. Working with journalist Glenn Greenwald, Poitras invites you to admire her carefulness with storytelling detail and also with Snowden himself. She affixes no halo. The film is foremost an eerily effective political paranoia thriller, but with a low-key, increasingly nervous man at its center. From the perch of fresh bedsheets, Snowden sparks a global earthquake. Hero, maybe. Highly principled bump on a log, for sure.

It isn’t just the sizzle of history that electrifies this movie, the story’s Martin Luther King–ness. It’s the chilling convergence of timeliness and timelessness. Director Ava DuVernay puts you in packed houses and nearly empty ones, in churches that overflow with worshipers and one that’s blown to smithereens. You’re in restaurants and the White House. Everywhere, the discussion amounts to how to proceed: with being lawful, achieving equality, staying married. I’ve never seen a movie more about the work of forward motion. Images of rows and rows of arms clasped, moving against the physical force of hatred, determined to get a civil rights law passed, achieving galvanic force. The movie blows past Selma and right through you.

1. Norte, the End of History

Lav Diaz’s contemplation of life after someone else’s death taxis a runway for the first 35 of its 250 majestic minutes. Once it takes off, you can’t believe you’re flying. You don’t want to land. The story, set in the Philippines, of a man wrongly imprisoned for murder, the wife he’s left behind, and the moral rot of the real killer, is like a work of philosophical and spiritual origami — Dostoyevsky with human levitation and mood lighting. The movie roves wastelands; it climbs to heaven. With each passing scene, Diaz finds new ways of compounding the visual and emotional scope of the film, reaching a degree of artistry that provokes an involuntary response. When it ended the first time I saw it, I stood up, with tears in my eyes, and clapped. The second time, I just sat in my seat, awed by what Diaz had achieved, and perplexed as to how. On neither occasion did I feel like I had simply gone to a movie. I had answered the call of God.

Filed Under: 2014 Year in Review, Movies, norte: the end of history, selma, Citizenfour, Land Ho, Inherent Vice, edge of tomorrow, Whiplash, The Babadook, Nymphomaniac, stranger by the lake, Best of 2014

Beyond the Edge of Tomorrow: The Year the Blockbuster Was Busted