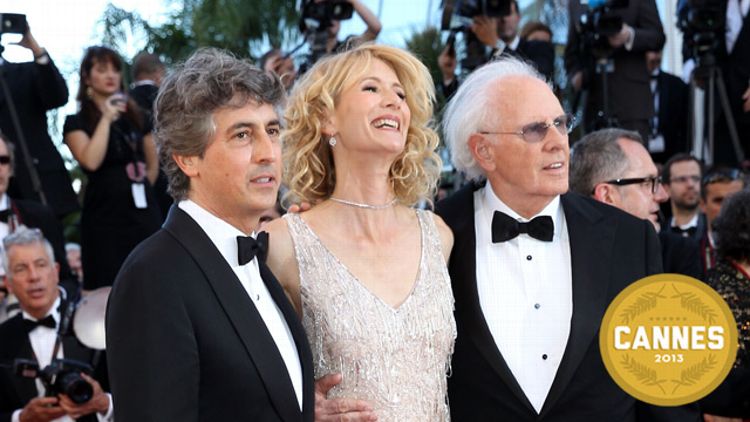 On the way into the new Alexander Payne movie this morning, it was obvious a lot of us were still recovering from yesterday’s Nicolas Winding Refn killathon. Only God Forgives has its defenders. In me, it’s got someone very sad to have missed the chance to watch the jury watch this movie, especially poor Naomi Kawase, whose films take an oblique, holistic approach to violence. They suggest the delicate temperament of a filmmaker who’d visit the emergency room over the slicing of a tomato.

There’s been some conspiracy-theorizing about the festival gaming the selection pool to suit the tastes of the jury’s president, Steven Spielberg, as if he’s Naomi Kawase, too. There’s a case to be made for this notion, because, in other sections of the festival, there are much stronger, more daring films. But Only God Forgives is a pretty sound counterargument. If it wanted to do the jury a favor, the festival could have put the Refn film somewhere else (or ignored it) and stuck, instead, with Michael Kohlhaas. It’s Only God Forgives, but with actual God.

Directed by Arnaud des Pallières and taken from Heinrich von Kleist’s 1811 novella, the movie’s got the Danish star Mads Mikkelsen — now of NBC’s underwatched Hannibal — as a dubiously accented, 16th-century French horse dealer who turns to murderous crime when the justice fails him. One should never complain about too many closeups of Mikkelsen, but a wide shot of something else would have been nice. Anyway, it’s just not a film you talk about the next day. It’s a film you don’t even remember you saw. And I just watched it an hour ago. You can say a lot about Refn’s movie. One of them isn’t, “What Refn movie?”

Behind the Candelabra changes everything

I don’t think we’ll be talking as loudly about Payne’s film, either. It’s a piquant, black-and-white road comedy called Nebraska, and it was heartily received, but I’m guessing that’s partially because no one loses an arm. Working from a script by Bob Nelson, this is Payne in the key of Sideways and The Descendants. It’s a movie just pungent and bitter enough to leave an aftertaste. It opens with a shot of an old guy named Woody Grant (Bruce Dern) walking on the side of the road in Billings, Montana. He intends to walk all the way to the title state, his birthplace, to collect a million-dollar prize. We know this won’t end with riches because the purse he hopes to collect is akin to a Publishers Clearing House solicitation. But Woody, who has dementia and won’t admit to his alcoholism, takes at its word the letter he received in the mail, and winds up being driven across the country by his reluctant younger son (Will Forte).

Nearly all the laughs come from the tension between a presumption of Midwestern mildness and the parade of caustic people we meet. The misapprehended news that Woody is a millionaire only heightens that tension because soon come the outstretched hands and buried resentments of his extended family and old friends. Payne remains as good a director of American regions and dialects, and conductor of their respective tones, as there is. He casts Dern, Forte, Bob Odenkirk, Stacy Keach, and June Squibb, who dominates the movie as Woody’s stout, salty wife, because they, and a hand of natural characters, are ideal for the landscape. Payne is a Nebraskan, too, which means the balance of testiness and warmth in his films was never meant to be a surprise. I just wish there were more to this movie than its portrait of pettiness, greed, and anomie. The cinematographer Phedon Papamichael pushes the black and white toward a kind of dust bowl gray. The open and majestic heartland iconography he shoots contradicts the smallness of the lives at its feet. That lack of color simply reinforces the isolating emotional weather. Payne is dramatizing the winter of his discontent.

My plan afterward was to eat or nap. Instead, I drifted around the Palais for 20 minutes in a funk. Payne’s movies leave you feeling as foul as the characters in them — pricks that draw blood. Walking off that malaise, I stopped to check the schedule and saw that a four-hour-and-10-minute Filipino movie called Norte, the End of History was about to start. I also saw the lobby dotted with peers and a couple of friends standing near the mailboxes and around the Nespresso parlor (for nine days, I’ve been burying the lead on you: There’s complementary, pod-based espresso here served by flight attendants from 007 Airlines).

Not one of these film professionals seemed terribly compelled to spend four hours in the dark after sitting for 110 minutes looking at a sunless Midwest. It was a warm, sunny day. Best, perhaps, to explore that, instead. But I found myself drifting toward the lobby, anyway, past a woman in a gold-and-cream ball gown who was having her photo taken, and into the theater. Doing this was entirely involuntary in a way that’s never happened to me. The festival director, Thierry Frémaux, brought the cast to the stage, including the woman in the dress, then the director, a small stylish veteran named Lav Diaz. I was hoping they wouldn’t notice that the house was maybe half-full.

They took their seats, the lights went down, the movie came up, and I sat there. Two-hundred-fifty minutes later, the lights came up, I stood with tears in my eyes, and clapped as loudly as I ever have for any movie in my life. (Note: I’ve actually never clapped for a movie before.) When Diaz made his way back inside the theater to join the cast, the applause grew, and the whistling and cheering commenced. You always hear Cannes stories of 20-minute standing ovations, but I always seem to miss them. This didn’t last 20 minutes, but it was long and special, yet didn’t feel remotely adequate thanks for what had just been given to us.

Norte, the End of History has the title of a war epic and the soul and scope of a Great Novel. It’s set right now and opens in rather mundane fashion: three friends talking in a café. One is a lapsed law student named Fabian (Sid Lucero) who casually goes on about how he’s opposed to everything, including nationality and capitalism, then proceeds to borrow money for his rent. The movie spins out from that banal hypocrisy into a series of moral crises that ruin lives. A double murder is committed that sends an innocent man (Archie Alemania) to prison, leaving behind a wife (Angeli Bayani) and two small children. The killer continues with his life but not without descending into guilt, misery, remorse, then something altogether more shocking.

For about 45 minutes, I thought about whether to leave, not because the film was bad but because I was unsure about whether to commit, in the same way that you spend the first 50 to 100 pages of a novel unsure about whether to keep going. There are people who get off on boasting about having endured a long movie. I’m not among them. It’s just that the same feeling that led me to my seat also kept me in it (excusing a 10-minute break for a sandwich). But, really, the force compelling us all to stay was the audacity of Diaz’s filmmaking. His scenes go on, though not for the sake of their longevity. The extended takes, at every range (wide shots, close-ups, a flying digital camera that approximates dreams), allow your eye to study the details of the prison cell or the vastness of a woman’s farm. They’re not long takes so much as deep breaths.

The movie takes you to the brink of despair over and over without ever venturing into the cosmic cruelty of certain, very good European directors. And the actors, especially Lucero and Bayani, are feeling what’s being asked of them. There are no mannequins here. Whether its a wife’s overwhelming joy to be hugging her husband or a man unable to harness his inner psycho, these are full, live-in performances. The brutality and sense of futility come straight from the characters, as do the moments of optimism. Diaz believes in cinematic free will. When one character stands on the edge of the cliff and contemplates leaping off it, you feel unspeakable suspense. When another perishes in an unexplained accident, you feel unspeakable heartbreak. Diaz is 54, and he matches his tremendous artistry with both quiet spiritualism and a rare wisdom of the ways of the world.

He’s made movies more than double the length of this. His Evolution of a Filipino Family lasts for nine hours. Norte was my first experience with him, but I was told by a couple of colleagues, whom I saw clapping on the other side of the theater, that it was his best. “It’s tough being good,” someone in Norte says. Not for Diaz.

This is the sort of masterpiece the main competition has yet to produce, an astonishing work of life, death, and art that isn’t bluntly political, vapidly violent, or completely self-obsessed. It’s a crime for the directors on the jury — Spielberg, Kawase, Ang Lee, Cristian Mungiu, and Lynne Ramsay — not to have the opportunity to see it. This is the one movie I’ve seen that speaks to their reasonably divergent cinematic concerns. If the competition lineup truly has been tailored slightly to suit them, in Diaz’s case they’ve been done an outrageous disservice.