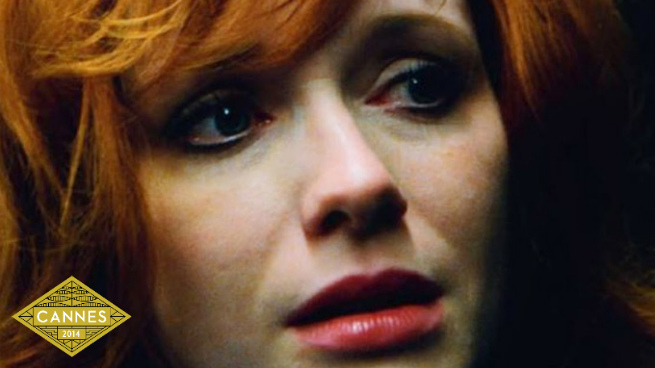 Look, this is my favorite place to see a movie. The prescreening electricity, the postscreening talks, the Mediterranean Sea, et cetera, et cetera: Nothing compares. But occasionally you find yourself in a crush to get into a movie, and you have to step outside yourself and ask, “What are we doing?”

Tuesday afternoon outside the Palais was a “What are we doing?” moment. Hundreds of people waited to herd themselves inside for the premiere of Lost River, the first film written and directed by Ryan Gosling, fresh from last year’s boos for Nicolas Winding Refn’s Only God Forgives. Gosling’s filmmaking debut is the first this year to generate embarrassingly desperate anticipation.

Its inclusion in the Un Certain Regard program raised some eyebrows, yet expectations were high. But when your introduction to a director’s vision is an unwashed, tank-topped toddler wobbling from one debris-strewn site to the next, you’re forced to think back to the pandemonium involved to get to this moment. The film occupies unoccupied Detroit. Montages of houses, bulldozed and blazed, are frequent. They’re the sort of lovingly photographed images that can only come from someone unaccustomed to the loss they represent. For Lost River is not an exploration of the wrongs done to this once great American city — it’s a playground constructed by a very good Canadian actor.

A frantic Christina Hendricks, as Billy, soon emerges to find that missing toddler — her son, Franky. She has another son, a teenager (Iain De Caestecker) named Bones, who doesn’t appear to think much of her. His time is also spent toddling around in unmoved yards of junk. They’re a family on the verge of losing one of the last houses standing. Without work, there’s nothing Billy can do to catch up. But there’s a new job. And only a rock couldn’t guess what it is. Gosling appears to be the sort of man who sees Hendricks’s water-pitcher figure and can imagine for it only one profession — not that one, but one that’s adjacent.

To be fair, Gosling adds a twist: Billy won’t strip or even dance. Her Detroit is chic with luridness. She’ll pretend to maim herself and be mock stabbed on the stage of a burlesque-slasher club, where the big money comes in sealing yourself in a hard, transparent plastic sarcophagus while male clients do what we’re led to believe is freaky and frightening. Meanwhile, Bones halfway flirts with a gothy mouse named Rat (Saoirse Ronan) and runs from a racing-jacketed thug named Bully (Matt Smith). Once, when Bones backs out of his babysitting chores to hang with his girl and her pet rat, Billy has to take the younger kid to the office. Fortunately, Eva Mendes is on hand to do a fascinating number and then watch the boy slather himself in fake blood.

Most of this occurs in the dark with horror-movie music and sound design. The camera’s often looking through or at grime. If you tossed this thing into a washing machine, there’d be nothing left. Every move is borrowed from other directors, including some Gosling’s worked with — the good (Refn) and the ones who think they’re better than they are (Derek Cianfrance). He thanks Terrence Malick in the closing credits, and appears to go for (or is it after?) David Lynch, Harmony Korine, Kenneth Anger, and the iconic Italian horror hacks — their Marilyn Monroe, Barbara Steele, plays Ronan’s comatose grandmother. But he’s under no true influence. In Steele, he’s managed to murder two of the most amazing eyes in the history of the movies.

Actors have more to do at Madame Tussauds. Hendricks is treated more indifferently here than she is in John Slattery’s directing debut, God’s Pocket, which is in theaters now. There are people who don’t want to meet their favorite stars for fear that who they really are will disappoint. That’s how I feel when some actors direct. I’m scared to know what they’re really into or that there’s nothing there but, say, a spoiled teenager with designer taste in condescension. That dirty, lost little boy traipsing through the debris? I’m sad to report it’s Gosling.

Lost River presented the biggest opportunity to jeer at Cannes so far. The booing was faint. Maybe the haters had already walked out. The applause was louder. This movie must work for some people, and they must have gotten the day off from the video store. The reason it’s here is obvious. A star made a fart, and the festival choose to ignore the “f.” But Cannes is the most Something Happens festival on earth. The bummer of the Gosling is that nothing does — in the film or to the audience.

You want the best from the movies here, and when you feel like a director is just saying, “Shut up, I’m Ryan Gosling,” you get the “What am I doing?” blues. Fortunately, Jean-Pierre and Luc Dardenne’s Two Days, One Night screened Tuesday morning. That’s the film with Marion Cotillard, and it’s laconically paced and totally gets the wish to keep believing in people. Cotillard’s Sandra doesn’t want to devote a weekend to asking her fellow employees at a small solar-panel manufacturer to reverse a vote they took, at the owner’s insistence, to throw her over or miss out on a bonus. She’s just come out of a depression, and the news threatens to send her right back. Some of the movie’s suspense involves whether she’ll keep her nerves together.

I loved the actors playing the coworkers, the movie’s depiction of a stressed marriage — her husband (Fabrizio Rongione) lovingly, worriedly pushes her to fight — and its backdoor social realism. The English blue-collar portraitist Ken Loach also has a movie in the main competition, but this is Loachier than anything he’s done lately. It’s also the closest Cotillard will get to Hilary Swank. What Cotillard brings to a part like this is fragility. It takes a couple of surprises for her to find anything even approaching fortitude. The Dardennes have arrived at a new place of warmth, optimism, and comfort with movie stars. I don’t think they would have been capable of this movie 10 or 15 years ago. It would’ve ended in tragedy. The realism in their masterpieces used to be seeing in the dark. But they’re finding ways to be just as morally powerful working in the light.

Guy Pearce and Robert Pattinson are in something showing out of competition called The Rover. I wasn’t crazy about it. But the director is David Michôd, who made Animal Kingdom. He’s got a knack for social haywire. You want to keep seeing what he comes up with, because he’s smart and has talent. The last shot of this new movie is both an emotional gut punch and a sick joke. Australia’s fallen apart, and when some guys on the run steal Pearce’s car, he stops at nothing to get it back. Pattinson is the toss-over brother of one of the thieves, and he’s a pleasant shock. The part’s incoherent and underwritten, but he finds a way to play it. Between this and his low-wattage limo driver in David Cronenberg’s Maps to the Stars, Pattinson seems to have made a crucial course correction from iffy stardom to inarguable skill. He’s decided to act, which is smart, because he really can.

The Something Happens moment in Ruben Östlund’s Force Majeure is not the miscued avalanche at an Alpine ski resort. Nothing’s destroyed; no one is seriously injured. It’s how one member of a young Swedish family responds as the snow approaches. The reaction is so subtle, but seismic in its way. The parents’ marriage starts to crack, which threatens to break up the entire unit (the couple has a small boy and an older girl). Östlund plays the aftermath for laughs based on a single, fascinating idea about human nature. Who knows what you’d do in a given situation until you’re in it?

Östlund is a party-trick filmmaker. He’s got a theory he wants to test. Movies appear to be his lab. His previous film was a more deliberate application of these social experiments — it was a grim adventure in racism and bullying called Play. You could feel him trying to create the sort of alarmist provocations that constitute Michael Haneke’s career. But Östlund doesn’t have a complete handle on the tone of his movies, and some of his scenes are stronger than others. He’s not as judicious as Haneke, either. (The new movie has a redundant side plot with the couple’s friend.) He’s into games. But Force Majeure has the audience both thinking and entertained. It’s a good game. 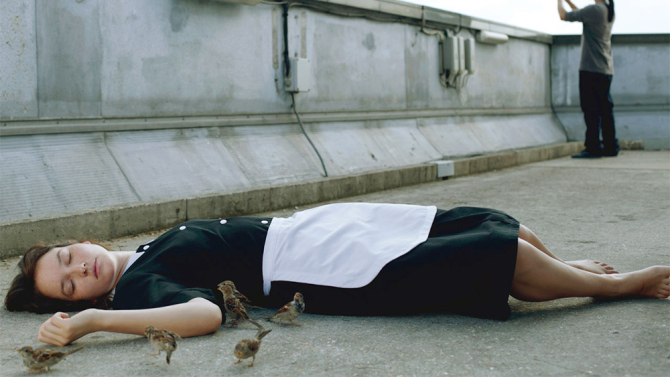 I exited the theater surprised Force Majeure wasn’t competing for the Palme d’Or. It’s as strong as, if not stronger than, most of what’s in the main lineup. It’s probably not serious enough or starry enough. With a couple of exceptions, nearly all 18 competition films star major actors. But one thing I love about the jury system at this festival is that it gathers some of the world’s great film talent and exposes it. Last year’s jury president, Steven Spielberg, mentioned being amazed by movies he might not otherwise have seen. I registered a complaint that he could have been more amazed had the festival screened Lav Diaz’s Filipino epic Norte, the End of History in the main competition rather than in Un Certain Regard. Whether Norte won anything or not, I wanted the world’s most famous director to see the festival’s best movie. I’m going to guess its painless four-hour-plus running time didn’t help its chances of making the cut.

This year, I don’t know what could be the excuse for keeping Pascale Ferran’s Bird People away from Jane Campion. It’s the most inspired thing I’ve seen. The film’s setting is the Charles de Gaulle Airport and a nearby Hilton, and the movie eventually is split into the story of a Silicon Valley businessman (Josh Charles) and a university student and member of the housekeeping staff (Anaïs Demoustier) who cleans his room. He makes a surprising life-altering decision. Then one is made for her.

This movie is none of what you think it is. It becomes more. And not just after Something Happens. Ferran makes extraordinary choices with her whimsy. The film opens by reading the minds of the passengers on the Parisian metro from the airport. It jumps to the businessman, then to the housekeeper, and then someplace funny, altogether unforeseen. I don’t know how Ferran even filmed her surprise. Drones, I’m guessing. But the authenticity of what the camera is keeping up with is also a little mysterious. This movie deserves to find a U.S. distributor who wants to make a little money delighting the shit out of people. It should be proud to put out a movie by a woman so attended to an audience’s movie-watching rhythms that she can scramble the familiar without breaking our trust.

Bird People has ideas about nature, human and otherwise. It’s got a sense of romantic wonder. It’s as interested in unfixed spiritualism as Naomi Kawase’s main-competition film. It’s got wordplay and philosophical questions equal to Atom Egoyan’s. The difference is that Ferran’s movie is actually good. Not only don’t you know how it got made — you also don’t quite know how what’s been made has made you this happy this profoundly. No prize is necessary for that. Ferran might even say she’s just doing her job. But it’s a scandal that the jury hasn’t been asked to experience the joy of the job she’s done.