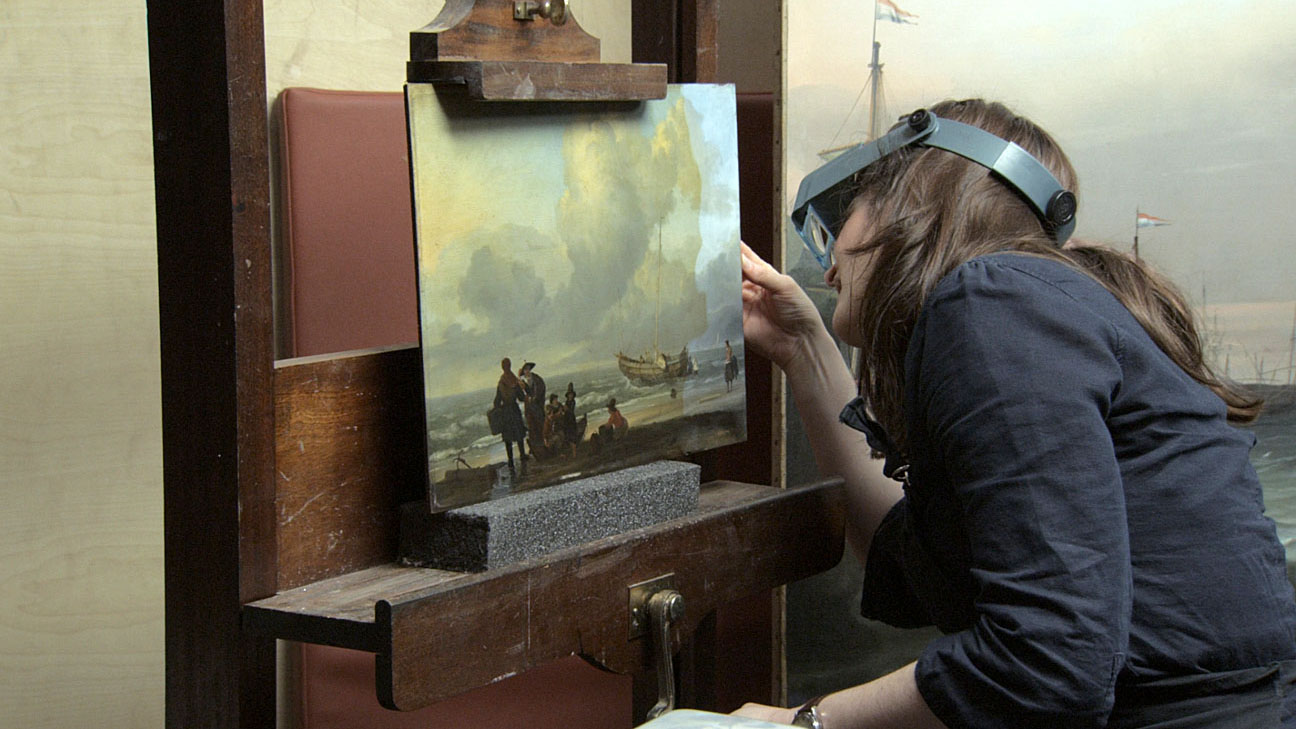 A few days ago at brunch, I mentioned that I was going to watch a movie about the National Gallery in London. It’s a documentary. It features people looking at art. It’s three hours long. All I got were condolences. That’s what you hear anytime you tell someone you’re on your way to see a Frederick Wiseman movie: I’m perplexed. I tell them that I’m going to a movie about a mental health facility, a primate research lab, a slaughterhouse, the modeling business, Tampa’s support network for domestic violence victims (and its sequel!), a boxing gym in Austin, Madison Square Garden, UC Berkeley. They say, Huh?

Anyone who’s gone anywhere with the 84-year-old, Cambridge, Massachusetts–based Wiseman to see what he sees notices immediately that huh turns to whoa. What he sees in National Gallery isn’t so much a new way to see. It’s the concentration and dissemination of all that seeing, the generosity of it: The montages of works in close-up or medium shots, yes, but also the way he notices the people watching or sketching or sleeping, the people queued outside in the chill or the rain as if at an Apple product launch. The film, which is in New York now and opening everywhere else over the next three months, gets more done in its three hours than we would in three days.

The museum complex, parked in Trafalgar Square, is modestly stuffed with treasures by old masters (the breadth of the collection more than its vastness is what makes it so impressive). Wiseman passes his privileged access on to us, and — after subtracting a flight, hotel, the dollars-to-pounds conversion — at a steep discount, too. To that end, he can take us where a civilian couldn’t go. His cameras are at the table for administrative meetings about the museum’s 21st-century budget and mission: Is it too willing to do special lavish, art-ish events, or not willing enough? They’re present for numerous visits to restoration studios where, in one, a woman delicately regilds a dauntingly ornate frame and, in another, the renovation of a towering Rembrandt is being explored and explained by the museum’s head of conservation, Larry Keith.

Major exhibitions meticulously go up and forcefully come down (da Vinci, Turner, Titian). Lectures go on in packed houses, art lessons go on in big classrooms. The camera stands among visitors touring the galleries with the museum’s curatorial staff, whose members perform persuasive close readings of different paintings. Wiseman does his own editing here, and there’s comedy in the contrasts, like when a film crew sets up to focus on a small Turner piece (The Fighting Temeraire), and the host is shown reciting an explanatory interpretation that he’s whipped up on the fly at the behest of a producer. It’s not bad, but after hearing the staff’s considered and, frankly, playful unpacking, this guy just sounds like he’s bloviating. There’s also gorgeous pathos in some of the cutaways. For the opening of its Titian show, the museum has what appears to be a donors event. (The size of the hair and tautness of the skin feels like a giveaway.) The camera finds two uniformed cater waiters staffing a drink station. One is pouring; the other is looking down in solemn thought. Wiseman doesn’t stress the scene; the image lasts for maybe two seconds. But by this point, we’ve been looking at certain servant-class splendor depicted in paintings for more than two hours. These two are it. Another director might have invoked the perfect painting to rhyme with that shot. Wiseman lets its beauty make its own evocation.

He’s been at this for six decades. Understanding the difference between roving simplicity and graceful sagacity is second nature to him. His movies mostly have self-explanatory titles: Primate, Welfare, Ballet, Racetrack, Zoo. Shorthand titles, long-form work, like War and Peace.

Recently, I’ve been a participant in or privy to at least four conversations about sacred cows. Shouldn’t some of them be turned into Big Macs? Once, I tried to make a case that Jean-Luc Godard is the sort of director that people have in mind when they rebut that question: an old genius who refuses to cease innovating. His latest adventure in form, Goodbye to Language, opened last month and is still playing; it’s characteristically impenetrable, but pounding it with a battering ram is part of the fun. Really, though, the ideal sacred cow is Wiseman, a filmmaker whose classicism gets crisper and more alluring with each movie. There has been a poignancy to him in the last 15 or 16 years. But he’s earned whatever fealty critics and some moviegoers feel toward him.

Like Godard, or like the baseball writing of Roger Angell or any writing by John McPhee, his movies bring wisdom to bear on their working without touting how wise they are. These artists don’t claim to have solved life. They continue to be curious about and excited by it, through their respective subjects. In Wiseman’s case, that subject is curiosity itself. His work has the restlessness of a man who wants to know as much as he can. His pace lately — about a film a year — is that of someone who doesn’t want time to run out. Sitting there with something like National Gallery, it’s not the rush of time you feel. It’s the rush of applied skill. You can’t sit with Wiseman for three hours, amid all of these carefully made treasures and not leave certain that he’s an old master, too.