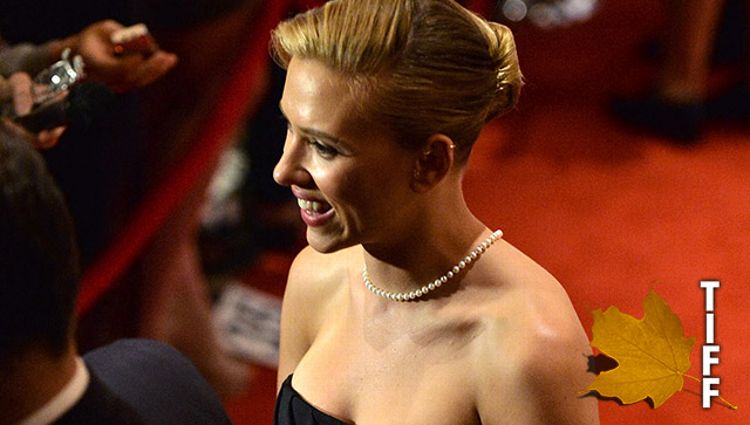 These are the last days of this festival, and they’re quiet. The cross-checking and confusion has dissipated. The odds of attaining a ticket to a public event or a seat at a press screening are vastly improved. You know what to see and what to avoid — and knowing that is the difference between having peers and having friends. Friends, for instance, don’t let friends see Labor Day. Apparently, they also don’t let them see Bad Words, Jason Bateman’s first movie as a director. A compatriot saw me waiting in a line and pulled me from it. “If you love him,” she told me, “you can’t watch it.” She wasn’t the only person who felt this way. She was just the most physical. For what it’s worth, I don’t love Bateman. You want him in your movie, just not in all of your movie. Nonetheless, I don’t doubt the geniuses at Focus Features will work to change the minds of the folks who feel that way.

But not all word of mouth is created equal. The other day I saw Jonathan Glazer’s first movie since Sexy Beast (2000) and Birth (2004). It’s called Under the Skin, and for the people who left early the other afternoon that’s where the movie wound up. The walkouts began after about 35 minutes. Glazer is a creepy, sinister visionary. If you’ve seen his music videos (for Radiohead’s “Karma Police” or UNKLE’s “Rabbit in Your Headlights”), you know he eats nightmares for brunch. For his new movie, he fakes you into thinking he’s going the opposite direction: There’s an endless supply of images of Scarlett Johansson removing her clothes.

Much of the first half involves her driving a van around Scotland, picking up men, taking them home. The blokes enter without exiting. Did I mention that she appears to be some kind of alien and that the men are some kind of food for whomever sent her to Earth? Do I need to call her “sexy beast, too” or mention that each pickup succumbs to a vague-but-certainly-miserable trap with a fully erect penis? (Between this and Don Jon, which opens next month, it looks like the movies are finally ready to be explicit about how Johansson makes certain men feel.)

For 30 or so minutes, this is spellbinding stuff. The film just feels scary. When Johansson — or whatever’s using her as a disguise — rolls down the window and chats up a pedestrian in a perfect English accent, you feel bad for the strangers. Once Glazer provides a sample of what’s to befall them, you feel worse. But just as you think this movie is heading toward some kind of clarified worldview, it pulls away. Johansson’s charming seductress act goes catatonic; she winds up wandering the streets, which is only nominally interesting. Then the film is over.

I understand the walkouts. I understand the people who’ve been telling other people to stay away. The movie is based on Michael Faber’s 13-year-old philosophical, satirical novel, but it’s so faithlessly adapted that it’s fair to say Glazer treats it the way the alien force treats those poor men. But the film has an odd hold. I would like to have seen Faber’s ideas followed all the way through, but you sense what Glazer’s getting at. You trust that he knows what he’s doing even as it slowly divorces itself from the thriller it’s intended to be. You’re left with a fascinating object. If the movie doesn’t belong in an art house (and it does), it would be even more at home in a museum.

Lukas Moodysson (a Swede) is another good director who seemed to have vanished. He seemed done in and wiped out by his first film in English, a large-scale, so-so thriller with Gael García Bernal and Michelle Williams from 2009 called Mammoth. His new movie feels unimpeachably Swedish. It’s set in 1982 and called We Are the Best! even though the three acutely androgynous 13-year-olds that hog a lot of the movie’s running time have formed the worst punk band you’ve ever heard. The band is a total accident. They want to take over a practice room because the band occupying it at the time is too loud. Plus they insulted the girls and didn’t even bother to put their names on the sign-in sheet! They’re the Powerpuff Girls if the Powerpuff Girls read Tavi Gevinson’s blog.

Moodysson has given us some treasures both sweetish (Show Me Love, Together) and severely sour (Lilya 4-Ever). His movies have been keen and curious about the travails of youth. He took this one from a graphic novel by his wife, Coco, and the entire thing feels like an indulgence — but perhaps a necessary one. Moodysson has said the experience of Mammoth put him off of movies. He wrote novels. He taught film. He tried to improve his chess playing. The aggressive happiness here was a way to recharge his batteries. But these three, with their sudden boy-craziness, mood swings, and indifference to practice? They’re an industrial-strength backup generator.

I mentioned Tuesday that Jesse Eisenberg was here in something called The Double. It’s based on Dostoevsky’s short novel about a functionary terrorized by his doppelgänger and directed and co-written by the English comedian Richard Ayoade. The movie is a brighter nightmare than the Glazer movie. You can laugh with it. It’s a funny existential toy. This is a dank, seedy cellar of a world. Eisenberg’s drone finds himself competing against, then collaborating with, a kind of clone of himself — for everything from job approval to a girl (Mia Wasikowska, of course). The movie is Kafka and Terry Gilliam and the Talking Heads. The sun never seems to shine. Death smirks from everywhere. But the camera and the editing never stop moving. Ayoade knows how to break up space for comedy — he’s Jacques Tati through a box grater. You can almost dance to this movie. And here Eisenberg gets a well-written part, something that lets him stammer and react and power-walk, something that lets him think. Right now, no American actor seems smarter.