Death in the Family: ‘Fuller House’ and the Long Tradition of Tragedy in Sitcoms 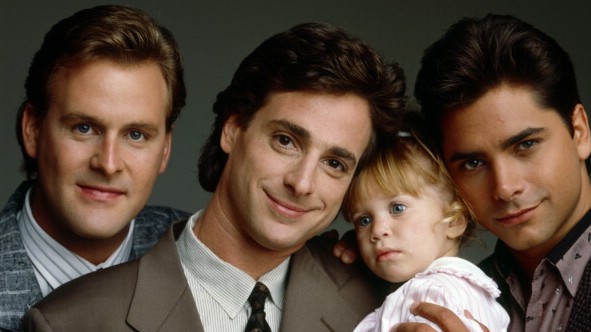 Remember the ‘90s? These days, you don’t really have to: Over the last 12 months, the television industry has become so reboot-obsessed that there’s even a reboot of ReBoot in the works. Netflix is doing its part to feed the machine with the forthcoming Fuller House, a companion series to the sickly sweet ’80s/’90s family sitcom. None of these reboots is explicitly necessary, and at first glance Fuller House seems the most unnecessary of all — the original series’ cultural legacy amounts to a collection of punch lines possessing the sell-by date of a Jimmy Fallon sketch — but paradoxically, under closer inspection, it has also proven the most fascinating future prospect. Here’s an excerpt of the show’s synopsis, the added emphasis entirely mine:

It’s not exactly Frank Underwood breaking Comet’s neck (Comet’s been dead for a while, anyway), but the pathos suggested by Fuller House’s synopsis is enough to inspire placement of the word “gritty” before “reboot” in conversation surrounding the show. But “gritty reboot” as a cultural phrase typically suggests a darker version of the reboot’s source material in question; with Fuller House, series creator Jeff Franklin (who, along with the majority of the original cast, has arrived to this second go-round with a hearty “You got it, dude”) is simply staying true to its origins. Underneath the Judeo-Christian life lessons, crass cross-promotional opportunities, and trippy amnesia sequences, the basic plot of the original Full House was unquestionably sad: a man, his brother-in-law, and his close friend attempting to raise his three children after his wife is killed by a drunk driver.

The pilot of Full House takes place just three months after the tragedy, and although the plot device was softened and smoothed over to near-nonexistence over the show’s eight-season run, it hovers over the first season like the literal ghost it represents. “The Miracle of Thanksgiving,” the show’s ninth episode, is particularly consumed with grief: D.J. tries to make the ceremonial turkey along with her mother’s “picture-perfect pumpkin pie.” Things do not go according to plan: The turkey isn’t cooked properly, younger sister Stephanie drops the picture-perfect pumpkin pie, and D.J. pitifully says, “I let mom down.” In the end, though, it turns out that the person who is grieving the most is none other than motorcycle-riding, guitar-slinging all-around-tough-guy Uncle Jesse Katsopolis. “When’s it gonna stop hurtin’, man? I keep thinking the pain’s gonna go away, but it doesn’t,” he says near the end of the episode in a painfully hurt tone that practically screams the opposite of “Have Mercy.” “I know that feeling, Jesse,” Bob Saget’s hug-prone patriarch, Danny Tanner, concedes before admitting, “I don’t think it ever completely goes away.” There are no “Aww”s to be found here, and it’s quite possibly the closest Full House has ever come to striking a true, devastating emotional chord.

So the very essence of what is known about Fuller House — a group of people coming together after an unquestionable tragedy and trying to make the best of things — is a callback to the show’s origins, but it’s also representative of the very culture of television from which its source material was born. The early seasons of Family Matters, an ABC sitcom that is often mentioned in the same nostalgic breath as Full House, featured Rachel and Richie Crawford, the sister and nephew of main character Harriet Winslow, who moved in with the mattering family in question after the death of Rachel’s husband.1 Family Matters was part of ABC’s Friday-focused “TGIF” programming block, which at points also featured Step by Step — a show about a widow and a divorcée marrying and subsequently merging families — and On Our Own, a sitcom about a group of siblings learning to raise each other after both of their parents die.

In the 1980s and 1990s, network TV sitcoms were littered with dead parents: Who’s the Boss?, Gimme a Break!, Webster, and Empty Nest all hinged on the conceit, among others, and one of the most important TV shows of the ’90s, Roseanne, infamously ended with the revelation that John Goodman’s Dan Conner had been dead for at least an entire season. In his child-star years, Jason Bateman pulled off a dubious achievement by starring in not one but two sitcoms revolving around the death of a parent: the one-season NBC vehicle It’s Your Move in 1984-85, and the late ‘80s sitcom The Hogan Family, a show in which its producers decided to kill off Valerie Harper’s main matriarchal figure in the third season after creative disputes.

In a fascinating development, Bateman also found himself playing the widower in one of the two network TV comedies to include the death of a parent in its narrative structure in the last 15 years:2 In Arrested Development, his Michael Bluth character is surviving the death of his wife alongside his son George Michael. The other program was the ABC sitcom 8 Simple Rules, which had to drastically adjust its narrative focus after John Ritter, who portrayed father Paul Hennessy, passed away in 2003. Ironically, the eradication of dead-parent-as-comedy-plot-device could be attributed to the general decline of the multi-camera sitcom, for which increasingly absurdist-leaning shows like Arrested Development were arguably responsible. More importantly, and for obvious reasons, the notion of loss in America took on far weightier real-life implications not suitable for laugh tracks.

When general hardship is applied to likable characters, however, modern-day sitcom audiences are more likely to recoil from the blast radius. (As Game of Thrones has recently proved, even the supposedly boundless landscape of Serious Television has its limits when it comes to needless cruelty.) The 9-to-5 sadism that Andy Bernard applied to his underlings in The Office’s later seasons proved tiresome and repellent; compare that to The Office creator Greg Daniels’s Parks and Recreation, which held on to its loyal audience until the end with cavity-causing sweetness. Ditto for The Last Man on Earth, a show in which its inaugural season started strong but quickly wore out viewers’ patience with a main character enacting titanic acts of selfishness on his well-meaning fellow survivors only to be rewarded with a questionable redemption arc. And who could forget the conclusion of How I Met Your Mother, a finale with such emotionally tragic implications that it could be perceived as a writers’-room troll job? More so than living up to notions of stale nostalgia, perhaps the greatest challenge that Fuller House faces in audience satisfaction is that, these days, we’re OK with bad things only when they happen to bad people.

Larry Fitzmaurice (@lfitzmaurice) is a Brooklyn-based writer and senior editor at VICE Media who has written for publications such as Pitchfork, GQ, and NME.