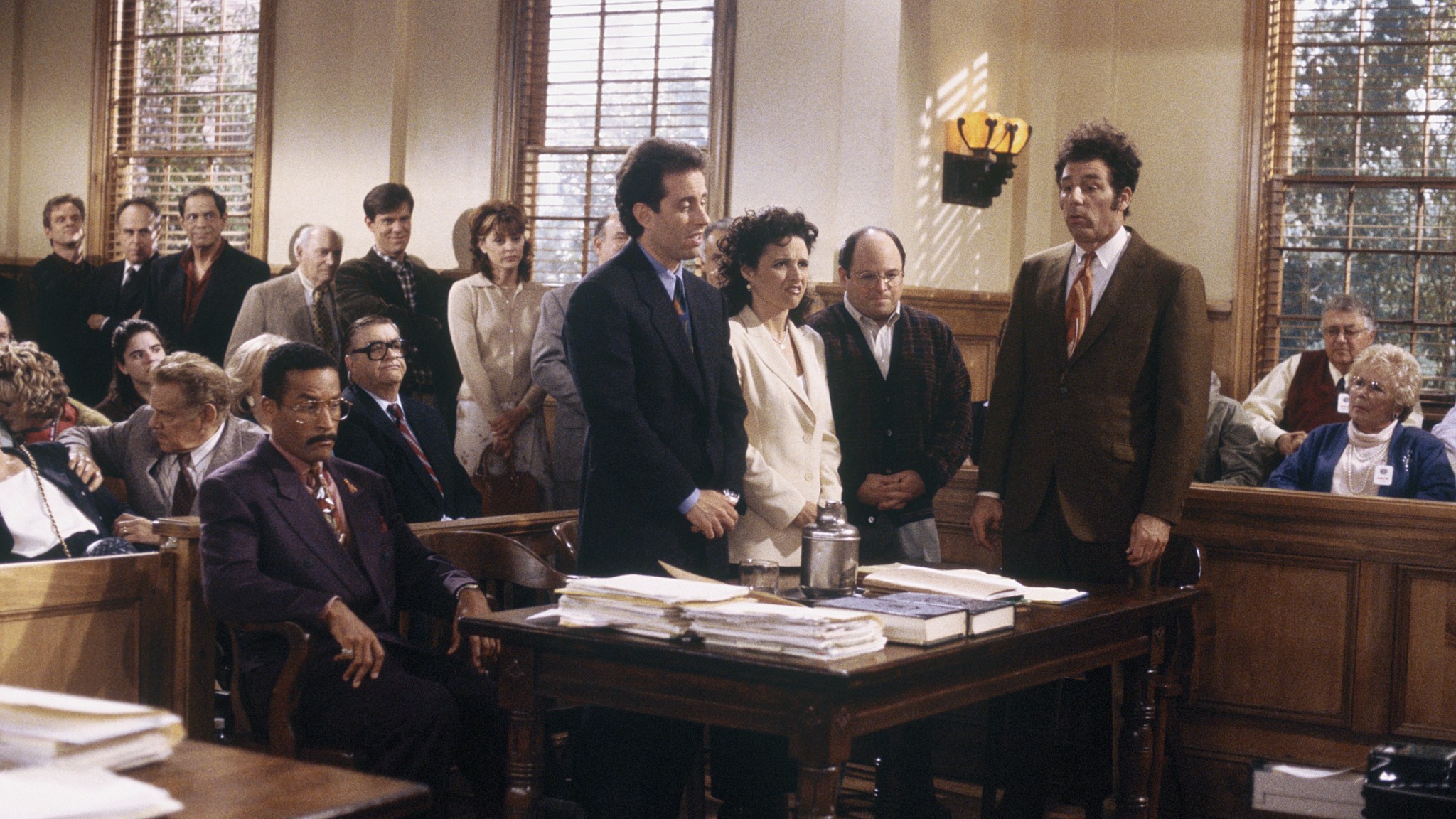 If I had all the time in the world, I’d sit down everyone who hated the Seinfeld finale and ask, one by one, what was wrong with them.

Since it aired in 1998, Larry David has had to explain why Seinfeld ended the way it did whenever he does an interview. He even devoted an entire season of Curb Your Enthusiasm to exploring how and what a Seinfeld reunion would look like.1 I have no doubt many people choose to view that season as the true capstone on one of the most consistent network television comedies ever. In an interview with Bill Simmons, David says of the final episode, while discussing how to bring Curb to a close, “Well, you know, I got so much grief from the Seinfeld finale, which a lot of people intensely disliked, that I no longer feel a need to wrap things up.”

I imagine that David has spent a whole lot of time thinking about why people didn’t like the Seinfeld conclusion, when it did everything it conceivably should have done: It paraded just about every character from the past into a courtroom to give Jerry, George, Elaine, and Kramer their comeuppance for being generally awful people. It distilled the show to its essence — four friends who could not cope with the outside world, who found comfort only in each other — and the final moments offered up a concrete ending. After being arrested for being terrible (seriously), the four of them are stuck in a tiny jail cell. The camera pans back and they seem almost oblivious to their situation. Instead, they discuss their daily lives in excruciating detail. The only difference is they’ve traded Jerry’s Upper West Side one-bedroom for an eternity in prison.

I’ve always been a fan of that final episode, so I can only guess at why so many were not. Maybe it’s that most sitcoms are not in the business of being unsettling. They stick close to their core plot, which can be boiled down to a family or group of friends hanging out in a single room in perpetuity saying funny things about awkward situations. When sitcom finales follow a template, that template usually involves everyone getting the happy ending they deserve. It’s almost fan fiction: What do you want for the people you love but can never really know? Happiness forever.

In the final episode of The Mary Tyler Moore Show, Mary is the last person to leave the office. Before she does, she smiles, hits the lights, and closes the door. It is what I like to think of as a classy ending. In fact, it worked so well that sitcoms would go on to repeat it endlessly. In the final episode of The Fresh Prince of Bel-Air, Will Smith echoes it, gazing at the blindingly white living room of the Bel-Air mansion he made a home in. Friends and Boy Meets World are just a couple more shows that spend their last few minutes in basically the same way.

Why weren’t these shows taking more risks? The safest part of any sitcom is its last episode. It’s a victory lap. Nothing more needs to be proven. In many cases, I imagine that the cast and crew are plagued by adult-onset senioritis. They’re showing up, but they’re otherwise checked out.

The best finales celebrate the long, beautiful history of the show. The worst wallow in their messy pasts, dredging up just about everything in service of artificial closure. In other words, bad shows make for bad finales all the time. Good shows make for good finales some of the time.

The last episode of Cheers fits firmly in the good finale category. After years away, Diane Chambers returned to the bar to whisk Sam Malone away from Boston for a new life in sunny, utopian Los Angeles. He’s initially uncertain, and then he decides to go for it. It’s a major life change, but change is, we’ve been taught, always good. It will not surprise you to find out that Sam has a change of heart before he even gets to L.A. He returns to the bar with a box of Cuban cigars, and after making him think that they somehow no longer had time for him even though he’d barely been gone, his coworkers and friends welcome him back. It’s late at night, and everyone sits around sharing cigars. Everyone’s holding their beer mugs by the handle at a late-night tilt. It feels like a true moment.

Looking at them sitting there after 11 years on the air, they’re a motley crew. Most of the dudes have mullets or crazy mushroom cuts. There’s no other reason they would have hung together so long except for their shared love of the bar. They ended up at Cheers as customers or employees, and they kept ending up there, night after night.

Toward the end of the episode, Woody Boyd gives a touching speech: “You know something? I hate change. I mean, you know, every day you wake up, something’s changed. Everything’s just changing so fast. I like things to stay the way they are. Things you can count on.” It’s a beautiful, honest moment. It flies in the face of everything we’ve been taught, while playing into the desperation for consistency that all sitcoms cling to.

The final episode of 3rd Rock From the Sun, on the other hand, is completely uninterested in honoring the world it’s constructed. In retrospect, it’s a miracle the show lasted six years. Here were a bunch of aliens from a far-off planet — including a squinty French Stewart who dressed like his favorite color was mustard, and a teenage Joseph Gordon-Levitt whose main character trait was that he was forced to go through puberty onscreen and spent most episodes roiling with frustration and confusion at the world he’d been thrust into (hey! Just like actual teenagers!) — who assimilated in a small town in Ohio. They are successful. Most people have no idea they aren’t from Earth, even though it is completely obvious they aren’t from Earth.

In the final episode, all of their work assimilating is washed away completely. They get called back to their home planet, and, after learning about what it means to max out credit cards they’ll never have to pay, they throw themselves a $19,000 going-away party in their attic apartment. Elvis Costello performs, looking just like he always has, except somehow doughier and floppier, the way everyone seemed to look at the very beginning of the 21st century. In the final minutes, rushed, emotionally devoid good-byes are said, and the aliens cram into their cheap spaceship to return to their home planet forever, leaving almost no mark on those they left behind.

Four years earlier, Roseanne Barr closed out the weirdest season of Roseanne in an extremely unusual way. The ninth season of Roseanne probably deserves a book-length analysis. In it, her blue-collar family wins the lottery and sort of crosses over with the darkly hilarious British cult comedy Absolutely Fabulous. Roseanne also has a nightmare about her daughter giving birth to Satan, and she hangs out with Hillary Clinton after running through an action-movie parody that guest stars Steven Seagal, Mike Tyson, and Don King. It feels like half the season is based on imaginary scenarios.

Then, in the final episode, less than halfway in, Roseanne begins a long monologue, revealing that she’d constructed an idealized life for herself and her family after her husband died of a heart attack. It turns out she couldn’t cope with the loss and spent the following years writing a book about her life in her basement.

In the last couple of minutes, she finishes the book, walks upstairs, stretching her neck with the kind of world-weary exhaustion that can come only from years of hard living, and sits alone in front of the TV. The camera swoops up so we’re looking down on her from above. There’s no moment of perfect closure, no switching-the-light-off scene. No great big sigh. Just a woman watching TV alone late at night.

Seinfeld might have been about how valuable like-minded friends are,2 Cheers might have been about the comfort of consistency and showing up day after day, Roseanne ended up being a show about soldiering through, and 3rd Rock from the Sun was about … uhhh, aliens being weird in an attic? There’s power in these final episodes — even the bad ones — because they reflect some recognizable part of our own lives. The main difference is that they’re doomed to repeat their mistakes every time we revisit their world.

‘Do You Like Prince Movies?’ Podcast: ‘Mad Men’ and Kim Kardashian’s ‘Selfish’