The Saddest Thing That Happened on The Real Housewives of Beverly Hills Last Night: What Every Other F—ing B— Is Thinking 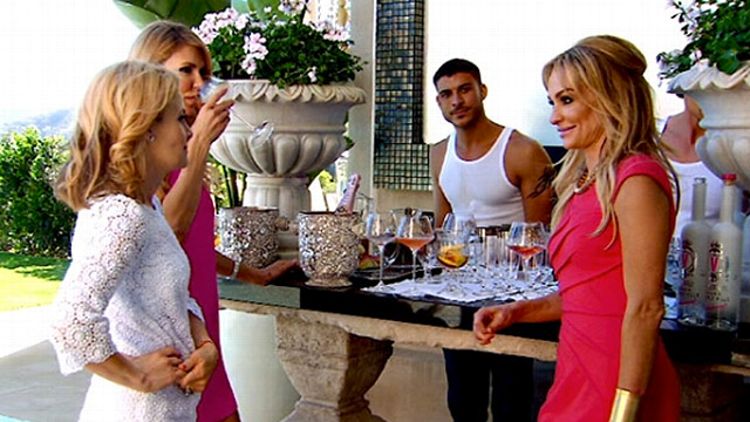 “I am very excited about Lisa’s tea party. I haven’t been to very many tea parties.”

Marisa Zanuck steps out of the limo onto the winding path leading to Villa Rosa, her ivory pumps crunching down on the alabaster gravel. This would be her sixth time in the company of the ladies, and she’s never felt more grateful to Kyle for welcoming her into the circle than now. Lisa’s home looks stunning; it’s a verdant monument to having everything in life figured out. Maybe someday she could have a house like that.

“Lisa’s very elegant,” Marisa says to nobody in particular. “I’m sure it’s going to be very beautiful.”

She walks through the glass doors into the courtyard, where Brandi, Taylor, and Lisa are already gabbing and sipping rosé. “Hi, beautiful!” Brandi squeals, shimmying up to her in a neon-pink shift. Even in her tallest heels, Marisa is still about a foot shorter than Brandi; she quickly turns her head to the side as she hugs her to avoid any part of her face touching Brandi’s breasts. Brandi pulls back and sizes up Marisa’s outfit. “You and your white dresses! I love it!”

They noticed she had a look! “I know,” Marisa says, feeling herself redden with excitement. “I only wear black. Or maybe white.” Things were off to a great start.

Lisa floats up to her, all serene and floral and refined. “Hello, darling,” she intones in that divine accent. “What would you like to drink? A glass of rosé, or a Pimm’s?”

There isn’t enough time to Google “Pims,” so she takes a glass of rosé from the bartender. He flashes her a smile, and she finds her gaze lingering on him a bit too long. She can’t help it! On top of his bulging physique, his jawline is amazing, and there is a thin sheen of sweat glistening on his face and chest, but in a sexy way, not a cokey way. If she was feeling brave, she tells herself, maybe later on she could try to develop her empty-marriage subplot with him.

“You have a nice husband,” Brandi says, as if she was reading her mind.

“I do,” Marisa replies, pulling her gaze from the bartender’s pecs.

“Except you are constantly talking about how he’s not sexy,” says Taylor.

“I know!” Brandi cries. It was so nice to have both these ladies giving her so much help with her subplot. She never would have expected to be the topic of conversation this early in the afternoon, and it’s more than a little thrilling.

“No, I’m not saying he’s not sexy,” Marisa says, choosing her words carefully. “It’s just that after having sex with him for 16 years, it’s like, it would be nice to have a change.” She makes another mental note to discuss the empty-marriage subplot with Dean that night; something she keeps forgetting to do. But he’ll probably be fine with it; it’s not like it isn’t totally relatable and normal to have these sorts of feelings about your spouse. In a way, talking it out in front of the cameras could be the healthiest thing for their marriage at this point. Honesty is so important for a marriage. Plus, it makes her look sassy.

“Are you guys not into threesomes?” asks Brandi. Alas, she could never be as sassy as Brandi. Everyone dissolves into wild cackles. It’s so fun to laugh about sex with girlfriends, Marisa thinks. Maybe laughing about sex makes people want to put you on TV, like the Kardashians.

Lisa comes back from setting up the table. “What are you guys talking about?” she asks.

Marisa laughed, too, but had the sudden, sinking feeling that the conversation was about to shift to another topic. Maybe they needed more information, more quotes, some elaboration, so that they might give more conversation real estate to the empty-marriage plotline in the future. Also, the word “bored” was bugging her as a keyword. Only boring people get bored — at least, that’s what her mother always told her as a child (Marisa would later remember that the exact quote was “only poor people who can’t dress for their body type get bored,” but both sentiments held true, probably).

“I just say what every other fucking bitch is thinking,” she snaps angrily. “I’d like to sleep with somebody else.”

As she grimaces and tosses back the dregs of her rosé, she realizes that the conversation has ground to a halt. She looks from Taylor to Brandi to Lisa, waiting for what she hoped would be laughs — it was a pretty sassy thing to say, after all — but they never came.

“And cheers.” Lisa says awkwardly, breaking the silence. Oh well. Hopefully someone eventually makes a GIF of it. 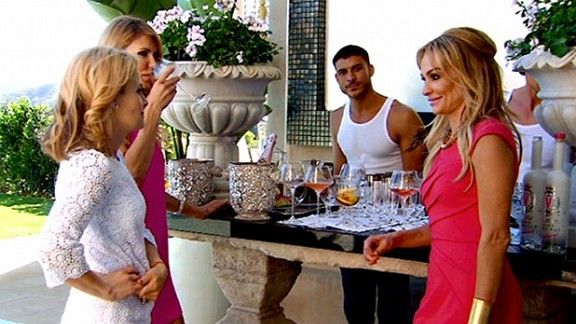