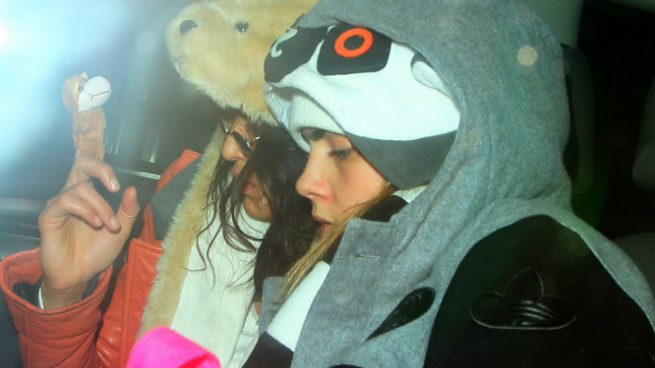 Michelle Rodriguez and Cara Delevingne Confirm (or Don’t) That They’re Dating (The Mirror): According to The Mirror, Michelle Rodriguez wanted to tell the world, so she did. “It’s going really well. She’s so cool. When we started hanging out I just thought she was awesome, and we have the best time together. She’s hard though. You wouldn’t want to mess with her in a fight.” Rodriguez is 35 to Delevingne’s 21 and they’ve been dating for six weeks. They seemingly met at a Knicks game Cara attended with Rihanna, where they were seen drunkenly making out courtside. Rodriguez and Delevingne are both openly bisexual. Cara’s been linked to Rita Ora, Jake Bugg, Harry Styles, and Jay Electronica. Rodriguez has supposedly dated Vin Diesel, Colin Farrell, Kristanna Loken, and porn star Jesse Jane. Some people are already worried the pairing of Michelle and Cara is toxic, since Rodriguez is a recovering addict and Cara is a known party animal. Plus, that photo of matching IV vitamin drips was a little sketchy. Michelle’s rep clarified to TMZ that the U.K. Mirror story is not true, since Rodriguez never spoke to them. But rumors continue to swirl around the inseparable pair. Michelle sounded a little too British in the Mirror story, so it wouldn’t be too surprising if it turns out to be false. But we still ’ship these two crazy kids. Best of luck to them.

Kate Upton a No-Show at the Sports Illustrated Swimsuit Issue Party (NY Post): While Upton didn’t show up, cover models Chrissy Teigen (Mrs. John Legend), Nina Agdal, and Lily Aldridge (Mrs. Guy From Kings of Leon) did. Upton had the cover the last two years, and she sort of got it again this year too, because they made the back cover of the magazine an alternate cover with her on it. Plus, she’s been getting a ton of press for doing the Dougie in space. Upton’s rep said “the model fell ill” but will be in attendance at an SI party in Miami.

Kim Kardashian “KIM’S BODY CRISIS” (OK!): Real missed opportunity for “KRISIS” there, OK! According to this report, Kim maintains her famous booty with “constant fat injections” and her catlike visage with “toxic face fillers.” Is she addicted to the knife? Perhaps. “Kim spends $500,000 on cosmetic procedures — destroying the looks that made her famous.” It’s true she looks a little waxy these days, but again, I’m not sure OK! understands anything about why Kim Kardashian is famous.

Jennifer Aniston “POOR JEN! Ditched On Her 45th Birthday” (InTouch): Stop trying to bring “POOR JEN!” back. It’s not coming back. Focus on spinster-shaming someone else for a change, like Taylor Swift. Or better yet, don’t do it at all!

“Justin Theroux Parties With Orlando Bloom on Jennifer Aniston’s 45th Birthday” (Us Weekly): OK, so maybe Justin Theroux and Jennifer Aniston didn’t spend her 45th birthday together, but it’s because he was on location filming his HBO show The Leftovers. Aniston had a birthday dinner at Soho House with friends including Courteney Cox. Theroux and Bloom were sort of wearing matching outfits? Or at least matching hats and similar leather jackets. It was an event to promote “the motorcycle club” and clothing company Deth Killers of Bushwick. Theroux was also spotted shopping for perfume in the West Village at Aedes de Venustas, which Us is generous enough to suggest might have been for Aniston’s birthday. Why do tabloids want Jennifer Aniston to be miserable so badly? She’s allowed to be 45 and unmarried. Lots of people are, and most of them aren’t millionaires like Aniston is. Go hassle Clooney!

Brandi Glanville Spills on Hookups in New Book (Radar Online): Describing her dates with “an NBA star who was married for 72 days to a reality starlet.” Kough, kough. “He was six feet eleven … The energy between us was out of control and even the simplest gestures became sexual. We couldn’t keep our hands off each other. By the time I was on my third glass of wine and he was on his third potato vodka, the heat was turning up. His hand found its way under the table and up my dress … It was on like Donkey Kong.” They ended up pulling over and having sex on the hood of his car.

“Which fashion icon sends out a scout to all locations and vacation spots he visits to check the furniture and make adjustments — including sawing down table legs — to make them the right height?” (New York Post)

“This TV personality divorced her hubby and took up with The Help. Well it didn’t work out, and now she wants ex-hubby back. He said no cause he’s living it up right now, but can she change his mind?” (Downfront 2)

“Which celebrity couple — one is a reality star, one is not — plan to celebrate Valentine’s Day by asking a very close friend to join them in the bedroom? He has a huge ego and loves the idea of being worshipped by two beautiful women. This is not the first time his lady has agreed to sharing him with other women. While she was pregnant she also turned a blind eye while he enjoyed himself.” HMMMM I WONDER WHO IT IS. The close friend, I mean. (Naughty But Nice Rob)

“Which actor is more worried about his looks than he lets on?” All of them? “A recent secret lower face-lift has helped him show off a more distinguished jawline.” (NY Post)

“A pretty actress was seated in the front row of one designer’s show, and attended the reception afterwards. However, she spent more time talking to one of the more famous models than the designer. Why? She wanted to interrogate the model about the affair she had with the actress’ husband a couple of years ago! The actress was incredibly blunt about it too. ‘Congratulations on the show. So … how long were you fucking my husband?’ The model admitted that she knew the husband (who is also famous), but rather weakly denied the affair and scurried away, clearly embarrassed about the showdown and the fact that several others had witnessed the accusation.” SHOTS FIRED. This could also be anyone. (Blind Gossip)

“We had to laugh about the reports of this pop star losing her virginity to an actor. Her first was a young former pop star. Her second was an older singer. The actor may or may not have been a very distant third.” Why “very distant”? Like he bronze-medaled? I don’t understand how space-time fits into this. (Blind Gossip)

I Can Haz 18-to-34 Demographic? HLN's Millennial Makeover