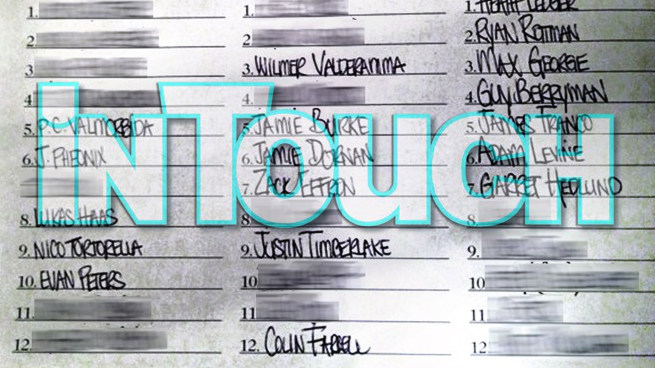 LINDSAY LOHAN’S LIST OF LOVERS! (In Touch) Did Lindsay Lohan leak her list of conquests to stir up interest so she can get a big payday to write a memoir? Who knows! All that matters is the list of conquests, which she helpfully put on a numbered list that was supposedly left behind during drinks with friends at the Beverly Hills Hotel in late January. So who is on the list? At least 36 people, but about half of them have been blurred out for unknown reasons. The visible names include some we knew about like Wilmer Valderrama, Max George, and a bunch more (some of whom had been rumored but never confirmed), such as Zac Efron, Evan Peters, Justin Timberlake, Lukas Haas, Colin Farrell, Heath Ledger, James Franco, Adam Levine, Garrett Hedlund, Jamie Dornan, and Joaquin Phoenix (Her?). The handwriting seems like Lohan’s, based off the tall, narrow handwriting we saw in her notes from court. Anyway, whether it’s real or not, it’s pretty spectacular. Plus there’s still a bunch more names on the list, and there’s gotta be an unblurred photo somewhere. Were the other names left off because they aren’t famous, or because they are married/otherwise involved and it is too potentially damaging to print? We’ll wait and see! (Hint: Check the blind items below.)

Jennifer Lopez Hates Being Alone, Is Ready to Admit It (Star) “Look, I don’t love being alone. I don’t. I can’t beat myself up for that. What I have to do is figure out why I don’t like it. Why am I not okay with being alone? And can I ever be okay facing that? In the past, love for me has always meant forever, and sure you still nurse some of those fantasies, but I don’t try to force it anymore. I hung onto my fairytale ideas for a long time. But where I am now, what I’ve been through, there are no rules. There are so many kinds of happiness, not just the one you learned about when you were five years old.” Wow, she IS real. That’s refreshing. J.Lo for life! I’m still always missing Bennifer, but it’s probably for the best they broke up.

Which Ex-Boyfriend Would J.Lo Save, Ben Affleck or Puff Daddy? (Us Weekly) Big Boy posed the question to Lopez during a radio interview: “You look in the ocean, you see two people floating. You can only pull up one, because that’s how much room you have on the raft. You look in the ocean, you see Ben Affleck and you see Diddy.” She laughed and said, “I’d let both those motherfuckers drown!” and then immediately clarified that she was kidding, saying, “That’s terrible, I’m just joking! Ben, Puffy, you know I love you. You know it! They know it.” Still miss Bennifer.

Lupita Nyong’o Has a Boyfriend (Us Weekly) She’s been dating Somalian-born rapper K’Naan since September, and not Michael Fassbender or Jared Leto as other tabloids have suggested.

Jennifer Aniston & Justin Theroux Are Still Together (Us Weekly) They held hands and had dinner at Locanda Verde in Tribeca. Aniston wore “an eggplant scarf,” while “Theroux, 42, protectively flanked his fiancée.” SUCK IT, HATERS!

How Celebs Spring-Clean (OK!) Time to declutter! Like the stars … “Angelina Jolie is a list-maker, Christina Aguilera keeps an organized closet and Gwyneth Paltrow is always one to keep her body and finances fit and not stagnant.” YES, BE JUST LIKE ALL OF THEM!

Taylor Swift & Selena Gomez’s Friendship Ends Over Justin Bieber (Us Weekly) Taylor Swift has ditched former bestie Selena Gomez in favor of Lorde, who famously dragged Selena’s “Come & Get It.” The reason for Swift and Gomez falling out? Bizzle, a.k.a. the baby Bieber, who Selena recently reunited with yet again against the wishes of basically everyone in her camp. Selena’s friends think the coupling of her and Bieber (“Jelena,” as they are known together) is toxic, and Justin’s deposition tape certainly didn’t make him seem like a very chill dude to even talk to, let alone date. Will Swift icing Selena out have any effect? Probably not. Selena is so sprung on Justin that any protest against their reunion will probably just fortify their dumb love. It’s just like Romeo and Juliet, with a lot more sizzurp. Best of luck with that, kids!

Justin & Selena Post Embarrassing Choreographed Dance Videos, Delete Them After Realizing Everyone Is Making Fun of Them (Star)

On Monday night Bieber posted two videos on his Instagram, in which he and Selena do a very dance class–y dance to John Legend’s “Ordinary People.” They were fucking hilarious, and probably people told him so, so he later took them down. Too late, though! The Internet is forever. “The song and routine seemed to tell the story of the former couple’s relationship, with Selena pushing Justin away and coming back to him once again.”

Halle Berry & Kate Hudson Are Both Single Again (Star) “BITTER BREAKUPS!” for Halle and Kate. Halle and Olivier Martinez are already fighting so much they are considering getting a divorce, making this Halle’s “THIRD FAILED MARRIAGE!” Meanwhile, Kate and her fiancé/baby daddy Matthew Bellamy from Muse haven’t been seen together lately, and Kate was spotted flirting at the Oscar parties. Hmmm.

Prince Harry Engaged to Cressida Bonas (Star) “Cressida Bonas” is the most posh British person name I have ever heard. She looks very … rich. Come on, Harry, stay single a while longer! You’re still young and it’s good for the tabloid narrative!

“There were signs before Christmas but during the holidays, he injured his back on a ski trip. This was not widely disclosed and kept out of the press. Painkillers were prescribed. The big movie was pushed back. Cocktails were consumed in combination at events. No one remembers he actually went to rehab several years ago. Still, so far, he’s functioning. And things are great with his wife. She really tries to take care of him but she’s not always with him. When he’s out on his own, it gets messy. There have been times lately where he’s been so drunk, he’s the dude passed out on the couch when everyone else has gone home. Either that or he’s the dude who’s all over the tall, attractive model type at the Oscar party that his wife decided to skip. Oh yeah, that happened. It keeps happening. They were talking nose to nose. He gave her the full charm. A “later on” was definitely implied, while everyone around him just shrugged. Because it’s not the first time and it’s not the last time and it’s the secret they’re all expected to keep. Not because he doesn’t love the mother of his children, because he does, he really, really does. But between the pills and the alcohol, he’s losing control of that side of himself that’s been held in check for too long.” (Lainey Gossip)

“This A list celebrity/rapper/designer made his A list reality star girlfriend cry the other night. They were ordering dinner and the girlfriend was going to order something for herself when the celebrity rapper told her she was not allowed to order for herself and that what she was going to order was going to make her get fat and that she was already fat enough and then he went on about how she needs to listen to what he says and just went on a rant which caused the reality star to start crying right at the table.” (Crazy Days and Nights)

“Which former sitcom star — a gal with a wacky, freewheeling sense of spirituality — used to breastfeed her pet possum while she got her hair colored, also making sure to have a wet nurse around to do the job when she was busy with something more important?” (Village Voice)

“Apparently this recent Academy Award winner has been using a pick up line on women that includes what he would like to do to them with his award. It has worked more than once.” (Crazy Days and Nights)

Who's Going to Lead 'Star Wars: Episode VII'? Probably Jesse Plemons or Someone You Don't Know

Do You Like Prince Movies? Podcast: ‘The Grand Budapest Hotel’ and ‘True Detective’