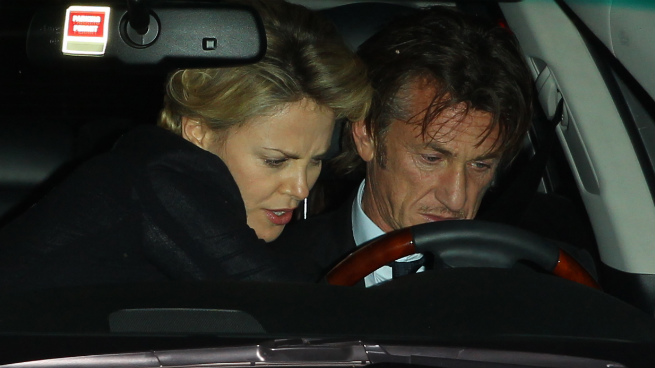 The Best of Us Weekly

Sean Penn and Charlize Theron Make Out at Madonna’s Oscar Party: Man, that is either really chill of Madonna, or really tacky of Sean and Charlize, or both. “Oscar winners Penn, 53, and Theron, 38, were making out like crazy and all over each other on the dance floor. They were the talk of the party. Even Madonna noticed!” And we all know how much Madonna loves not being the center of attention! Madonna played it cool and walked “around the party trying to get everyone to dance.” Stars, they’re just like high school.

Kimye Set a Wedding Date!: They will marry “in Paris, France, on Saturday, May 24.” CLEAR YOUR CALENDARS, EVERYONE. Kim told Ryan Seacrest it would be “a super, super small, intimate wedding.” LOL yeah right. “As we go along, we’re realizing we want it to be smaller and more intimate than people are imagining and thinking.” So, just a couple of gold-plated doves and the Palace of Versailles? “I just can’t believe I’m engaged,” said Kim. “… Again,” said everyone else.

Justin Bieber Posts a Pic of Selena Gomez on His Instagram: He reposted a picture of Selena at the Vanity Fair Oscars party with the caption “Most elegant princess in the world.” Bizzle, are you sure you’re drinking enough lean? Because you sound thirstyyyyyyy.

Robin Thicke & Paula Patton: He is still trying to get her back. She is over it. “Robin wanted to save their marriage, but it was Paula’s choice and she ended it. Robin does not want this divorce.” He made as much clear during his concert in Atlantic City. He responded to a fan who said “I love Paula!” by saying “I do too,” and then launching into Al Green’s “Let’s Stay Together.” On February 27, he also tried to get the audience on Team Thicke by saying, “For y’all that don’t know, me and my wife separated but I’m trying to get my girl back. She’s a good woman.” Maybe you shouldn’t have been so blatant about cheating on her then, rumored open marriage or no. Also, they’ve been together since high school. It happens.

Joe and Teresa Giudice to Go to Jail for Fraud: The real housewife of New Jersey and her husband are awaiting sentencing. “Teresa pleaded guilty to four counts of money fraud and Joe to five. The cookbook writer faces between 21 and 27 months in prison and her husband faces up to 46.” Those are reduced from the potential penalty of 50 years each. They are hoping to serve time separately to be able to keep parenting their daughters. Not sure that’s gonna fly in court.

Are Lupita Nyong’o and Michael Fassbender Dating? The Sun thinks so. “Michael was physically demonstrative with Lupita throughout the ceremony, and sources claim the co-stars were once lovers.” Wait, were, or are? “Michael is intent on showing how he wants to get serious again and made a point of bringing his mum Adele to the Oscars rather than a date. Lupita’s the most in-demand woman in the world at the moment so it will be hard to make it work but their chemistry is undeniable.” What does this selfie make you think?

There Will Never Be a Fat Bachelor, Says Chris Harrison (The New York Times Magazine): Harrison said he would never consider “a less hunky Bachelor, like maybe a chubby guy,” responding, “No. You know why? Because that’s not attractive, and television is a very visual medium, and I know that sounds horrible to say, but I know that at 42, in the eyes of television, I’m old and unattractive.” Well, you’re still on TV anyway, Chris Harrison, and maybe we should expand the definition of beauty a little bit more, ya know. He’s also against having a gay Bachelor, but for different reasons than homophobic Juan Pablo. “The question is: Is it a good business decision? I just spoke at USC the other night and I explained it like this: ‘Look, if you’ve been making pizzas for 12 years and you’ve made millions of dollars and everybody loves your pizzas and someone comes and says, ‘Hey, you should make hamburgers.’ Why?’ I have a great business model, and I don’t know if hamburgers are going to sell.” Chris Harrison, what you’ve just said is one of the most insanely idiotic things I have ever heard. At no point in your rambling, incoherent response were you even close to anything that could be considered a rational thought. Everyone in this room is now dumber for having listened to it. I award you no points, and may God have mercy on your soul.

Katy Perry & John Mayer Are Still Split (In Touch) “Katy dumped John because she was unsure if he was staying faithful.” She supposedly found texts he sent to a “24 year old SoulCycle instructor” and freaked out. Katy “always thinks John is either going to cheat or is cheating.” But she might be paranoid for a reason!

Star Doubles Down on In Touch‘s John and Katy Story: It also cites a 24-year-old spin class instructor by the name of Lauren McHale as the reason the musical super-couple split. “John isn’t exactly torn up over being dumped — he’s gotten fed up with [Katy’s] partying and how she constantly wears a diamond ring on her left hand to create relationship buzz. ‘They have completely broken up and he’s moved out,’ the source adds. ‘Katy is a wreck.'” She does seem pretty miserable on her current Australian press tour.

All About Oscar Winner Matthew McConaughey (People) “My life outside my career is extremely enriching. So I am letting that feed my work, and letting my work feed my life.” Richard Linklater says McConaughey’s wife, Camila Alves, is the reason for the season; “she will approach it as, ‘What does Matthew want?’ That’s the direction she pushes him.” Is Camila the secret Claire Underwood behind the McConaissance?

“Somehow she got this idea planted in her head that she was going to be this Actor’s date to the Oscars. So, approximately a month ago, she told all of her friends that she was going, and planned out her dress and hair and makeup. Who did he take as his date? Not her! She cried (not in front of him, but to her girlfriends) when she found out. While she did show up at the same parties, good luck finding a photo of them together as a couple. Yes, he can be kind of distant that way. And it seems that the more distant he is, the more she goes running after him! When are his girlfriends going to learn? They are all interchangeable and replaceable arm candy.” (Blind Gossip)

“The passenger was a well-known actress, her significant other, and a couple of unknown guests. The driver reported that the pickup and the ride went fine, and that the passengers appeared to be enjoying themselves. After he dropped them off, though, he had found that they had left a little something behind. It was a small plastic baggie of cocaine. The driver immediately called back to the limo company in a panic. Should they call the passenger and tell her that she left something in the car? Should he throw it away so he wouldn’t get arrested if he got pulled over or if the car got searched for some reason? Should he leave it there and pretend not to know anything? They decided he should simply hold on to the package until the end of the night and put it back on the seat exactly where he had found it. The actress spotted it immediately when she got back into the car. She picked it up and excitedly yelled “Holy shit! Here it is!” She always has been rather energetic.” (Blind Gossip)

“This very famous Actor was absent from The Oscars last night. While you don’t have to go to the ceremony if you are not personally nominated, stars typically show up to support their film/costar/director if one of them happens to get nominated. For example, even though Jennifer Garner did not get nominated herself, she was there to support Jared Leto and Matthew McConaughey and Dallas Buyers Club. It’s professional courtesy. Our Actor was invited to the ceremony… but was a no show. At one of the after-parties, someone asked his Costar where the Actor was. The Costar said, “Being selfish as usual. Me, me, me. It’s all about [Actor]. If he isn’t the center of attention, there’s just no point (in showing).” The Costar usually has a pretty healthy sense of humor, but in this case, they definitely didn’t sound like they were kidding!” (Blind Gossip)

The New Quvenzhané Wallis–Starring 'Annie' Has a Trailer