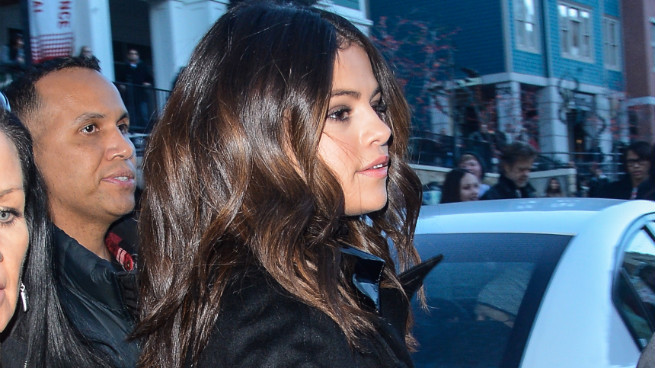 Selena Gomez Was in Rehab for Bieber Fever (In Touch): The real reason Selena Gomez went to rehab? She was addicted to Justin Bieber’s soft touch. The baby-faced super-couple had a toxic relationship that ran high on drama. She finally realized she had to get out when an STD scare made her decide the Bieb wasn’t worth it after all. Selena did a two-week stint in rehab and apparently left before completing the program. She posted an Instagram photo thanking her fans for “the unconditional love and cyber hugs.” She posted an inspirational boat prow selfie that haters quickly noticed featured her clutching a glass of red wine. The photo turned out to be six months old. Look, Selena, here’s some real talk: You were great in Spring Breakers and you can get a hotter boyfriend than the Bieb. Now go forth.

Miley Cyrus Tried to Seduce Her Sister’s Boyfriend (Life & Style): Hannah Montana and her sisters! Miley is so hungry for attention and sexual validation that she hit on her half-sister Brandi Cyrus’s boyfriend Samuel Jay Hancock. “A NEW LOW.” This story has already been debunked because (a) Brandi and Sam are no longer together, (b) he’s married to someone else now and they just had a baby, and (c) he’s a Christian rocker. The story is actually supposed to be from a few years back, but Hancock says it’s all bullshit. “That makes me look like I entertained a 15-year-old. Not true!” Seems pretty unlikely that a Christian rock dude would bang his girlfriend’s teenage half-sister. “I don’t want to invade Brandi’s life because she’s doing great things. But that never happened!” Well, there you have it!

Johnny Depp and Amber Heard (Life & Style): “IS SHE USING HIM?” Can’t you just let these two crazy kids be?

Drake Cites Ancient Egyptian Copyright (TMZ): Jeweler Michael Raphael made a $50,000 OVO owl chain for Drake. Drake then knocked off the custom chain himself, and Raphael sued him for stealing his design. “In his legal docs, Drake says the jeweler doesn’t own the design — pharaohs do … because it’s based on an ancient Egyptian hieroglyph — a symbol that may be more than 5,000 years old.” Drake’s team says you can’t copyright a hieroglyph, and therefore Raphael has no case.

Sarah Silverman Is Dating Michael Sheen (US): Call them … SilverSheen. Michael “Wesley Snipes” Sheen has romanced Kate Beckinsale and Rachel McAdams. Silverman dated Jimmy Kimmel and was most recently linked to Kyle Dunnigan. Masters of Sex actor Sheen is a babe, so uh, get it girl.

Suge Knight Punched a Pot Shop Employee (TMZ): Look, if Suge Knight comes into your weed store, you serve him. It doesn’t matter whether he has a card or not. You give him the marijuana. Otherwise he will sock you in the face and threaten your life, and nobody will be surprised, because he is Suge Knight.

Rihanna Almost Went Bankrupt (TMZ): A bad accountant encouraged her to buy a really expensive house that she eventually sold at a loss. She went from having $11 million to $2 million by the end of 2009, and her Last Girl on Earth Tour was actually a money pit, but the accountant never told her. This totally explains why she never stops touring or making albums for one second. Don’t cry for RiRi, she’s now worth $43 million.

Bruce Jenner Is Obsessed With Looking Younger (TMZ): Jenner has developed a “Michael Jackson–like obsession with plastic surgery” and is convinced he can regain his youthful good looks by going under the knife. Bruce’s midlife crisis involved a move to Malibu, the purchase of a Harley-Davidson motorcycle, and a weave to emulate his once luscious hair. Witnesses say that Bruce talks about the glory days when he was a gold medalist in the 1976 Olympics when he golfs.

Which annoying Olympics TV presence has already overstayed his welcome? “He thinks he’s the only reporter at the games. He just cannot understand why Putin will not give him and his entertainment show a tour of the Kremlin. He is delusional.” Maybe he’s hoping his “famous last name” will get him access to other big-name guests. (Naughty But Nice Rob)

Which star who won an Academy Award before 1951 has pawned their Oscar as collateral in order to secure a loan? (Daily Mail)

Which rapper is pissed about his wife’s sexy Instagram? “This couple recently sent the social media ablaze with rumors about them splitting up.” The rapper “was recently spotted in Phillipe’s in L.A. stressing out,” and “allegedly walking around venting about how his wife doesn’t listen anymore. He also went in on how his wife was posting a$$ shots on Instagram.” Chill out, man; whose wife doesn’t post ass shots these days? (Mouth to Ears)

Which male underwear model soiled his briefs? “He has sold millions of men’s underwear with his glorious chiseled body — however, this star needs a lesson in personal hygiene after leaving several pairs of briefs he modeled not so fresh! (Naughty But Nice Rob)

The Tupac Biopic Is Back on With John Singleton