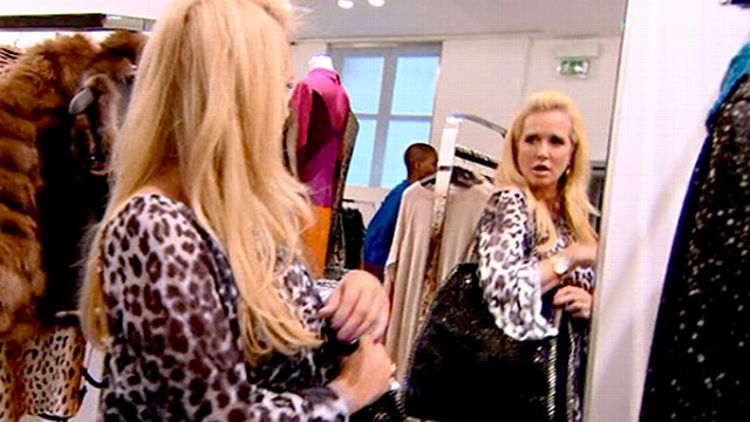 It’s been a difficult couple of days. Kim is quickly learning that Paris is a very stressful city. Ducks get beheaded for sport, and there’s always a rumbling Mercedes passenger van waiting outside that she somehow always manages to be the last to board. Now the ladies are all supposed to unwind with some shopping, but all Kim wants to do is go back to bed. She never fully adjusted to the time difference; she didn’t trust herself to take Lisa’s melatonin. She trails behind the others as they approach the doors of yet another tony boutique, naggingly aware of the flyaways on top of her experimental front-pouf.

Kim doesn’t know why she’s drawn to it, but as soon as she enters the store and sees the big black rectangle hanging on the accessories wall like a dark portal into deep space, she knows she has to touch it. She isn’t sure what it is, but it speaks to her, and she’s especially delighted and relieved when she realizes it’s actually an enormous handbag. She lifts it off the shelf — it’s even heavier than she thought it would be — and hangs it on one shoulder.

She looks at her reflection, and turns to the side. The bag seems to absorb all light, and is conveniently big enough to hide behind. It’s like the cloak of invisibility in the Harry Potter movies, but she could also put things inside it and you wouldn’t be able to see them from the outside.

Kim pretends not to hear her. She’s in no mood to roll over for her sister today. This is her black void, and she’s not about to share it with anyone. She gazes at the mirror, unable to tear her eyes away from it.

“I like this.” She turns from side to side, as the rest of the world seems to fade away. “Uhhhhh. I really like this.”

“It’s a very nice bag.” Kim looks up, disoriented, as a voice other than her own breaks the trance. She sees Maurice standing nearby in the mirror. He always makes her feel self-conscious, and instantly she begins to worry about how long she’s been standing there looking at the bag. She puts it back hurriedly, averting her eyes from it so as to not get caught up in its dark pull again, and pretends to be equally enamored of an infinity scarf hanging limply nearby.

Later, after the ladies have all made their purchases, Kim stands outside with Yolanda and Kyle. She still feels the nagging need to explain herself — her oversleeping, her distraction, the ghosts on the terrace last night. But how could they ever understand all the things she sees and feels? Words were never her strong suit, she’d never feel like she spoke the same language as other women her age, but they were still the only means she had.

“I want you guys to know that as strong as I feel in my sobriety, I get scared too,” she says. “This is me, this is my life, I don’t want to lose this. I love being sober, I love being happy and enjoying my life.”

“Well, on that note, we bought you a present.”

Kim turns and sees Maurice approaching with a huge shopping tote. “I saw you were looking at a bag?”

Kim feels her mouth go dry as her eyes catch a black shiny glint through the tissue paper, feels that unnatural weight as she takes the bag into her hands and lifts out the black void, now actually, officially, hers to own.

“Oh, Maurice,” she says, hugging him, already feeling her physical self detaching from her consciousness. “Thank you.”

“You’re welcome,” he says, backing away from her. “Now, I’m gonna go with Ken, I’m gonna go on a Segway tour of the city and just have fun with him. Bye.”