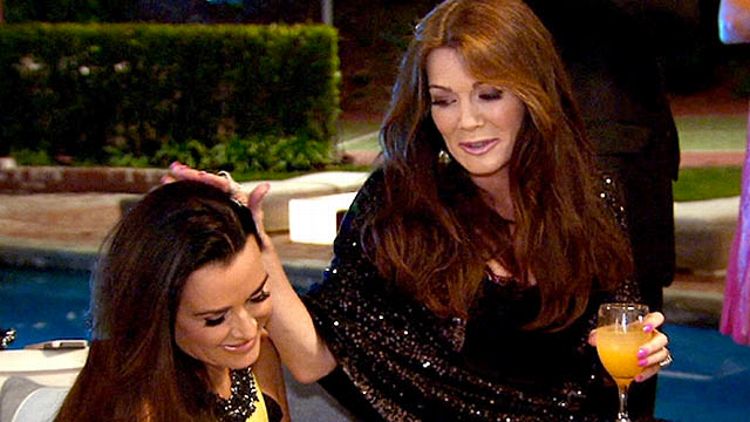 The whole thing! Ha-ha, yeah, no, seriously, I’m done with this show.

Is it weird to say that I miss when the sadness was unintentional? I still consider the first two seasons of The Real Housewives of Beverly Hills to be among the most important happenings on contemporary reality TV, precisely because of the violent, weird clash between its marketing and packaging and the actual unforeseeable (she said naively), hardly glamorous horrors that it ended up capturing, both tabloid-fueling (Camille Grammer’s divorce from Kelsey Grammer after 13 years of marriage, the suicide of former housewife Taylor Armstrong’s husband Russell) and subtle (any “Kim Richards at home” moment). Bravo tried its best to spin these events as “juicy,” but if you took away the plucky music and twirly opening credits you were left with a terrifying, gold-plated slow march to death, and secretly one of the more poignant ways to spend an evening on the couch.

But no reality show can last more than a couple seasons before it becomes self-aware; Jersey Shore taught us all that. If all the Housewives franchises have their own unique negative descriptor to define them — Atlanta is the crazy one, New York is the pathological one, Miami is the gross one — then Beverly Hills was the depressing one, and it seems Bravo and Evolution Media have finally decided to try to harness that bad energy into something dependable and predictable. (Has any reality show ever decided to make its stock in trade “domestic tragedy”?) On this fourth season, which premiered last night, that apparently means focusing on the Kyle Richards–Mauricio Umansky cheating scandal, which may seem like small beans compared to what the faithful among us have been through, but when put through the RHOBH lens is akin to mainlining from a Swarovski crystal punch bowl full of bad vibes. And bad vibes are more or less on-brand for this show, but the punch isn’t even halfway organic anymore.

Do the producers think they’re trafficking in some kind of 99 percent revenge porn against the tacky elite of West L.A.? That was never the appeal for me – I am Team Not Kyle Richards forever, but I still feel icky watching her deal with her husband’s infidelity on a nationally broadcast TV show, precisely because of how scripted the actual scenes of dialogue appear to be. The fascinating part of the show was always how the women processed these events, which vacillated wildly between surprisingly relatable and shockingly repressive. In her must-read recaps at Vulture, Julie Klausner regularly employed the addiction-recovery mantra “you’re only as sick as your secrets” in her growing frustration with the Richards sisters’ downright Victorian “if we don’t address it, it never happened” approach to Kim’s alcoholism. The expression is just as apt for Kyle’s fury at Lisa Vanderpump for broaching the cheating subject in her house. (On a happier note, Kim was looking healthy and gorgeous last night. I wish her the best of luck.) I guess if you were raised in a loving, functional environment the show would make you count your blessings, but the show never really let you forget that there were human beings inside all these monsters, just stuck in nasty cycles of fear, loathing, and ill-advised trips to Las Vegas. When they struggle to cry through Botoxed eyes, you see a human spirit struggling in confusion against all the bullshit constructs it has surrounded itself with. Thinking these bitches deserve it is a terribly myopic way of watching the show, and not nearly as interesting.

Still, the armchair psychology is and probably will continue to be fun for certain characters. My favorite observation from last night’s premiere was how Kyle has become that which she once hated: Season 1 Camille Grammer, her former nemesis, who at the time was the perfect foil for Kyle to build her image of down-to-earth realness against. After three seasons of being the one with the beautiful family and the hot husband and the long, flowing hair, the cheating rumors have turned her into a deeply — yup, you guessed it — INSECURE ball of self-loathing. The cycles of having, having not, speaking up, and simmering down on this show are like a never-ending tragedy of manners. I won’t say I won’t miss it a little.

I’m not quitting RHOBH because it got too depressing; that’s what I’ve been eagerly showing up for over the past couple years. I’m quitting because after three seasons I can see the strings, I can sense the effort with which they’re forcing the malaise instead of just letting the indigenous bummers of Beverly Hills wash over the season naturally. I live in L.A. — if I want my dose of vérité west-side ickiness I’ll just go eavesdrop in the women’s bathroom at Villa Blanca. Not that I would do that. Or have ever done that before.