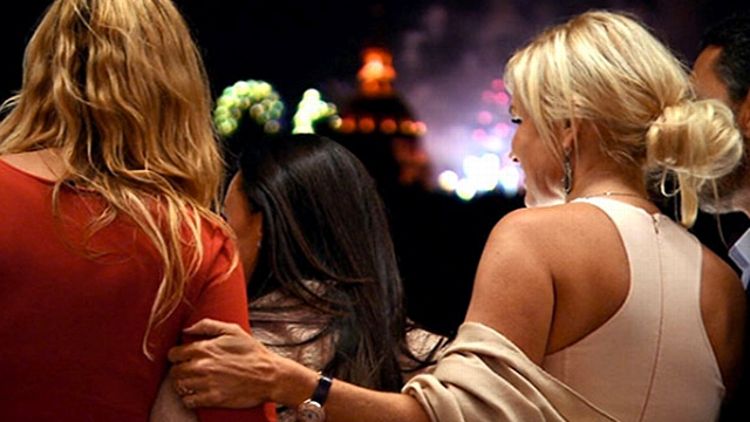 Editor’s note: It may have seemed that former child actress Kim Richards, who has long struggled with sobriety during her tenure on The Real Housewives of Beverly Hills, was intoxicated on last night’s episode. There are actually a number of explanations for her behavior.

Kim takes a deep breath and walks into the hotel suite. She’s late, but her being late is kind of a joke now, so maybe this will end up being a fun way to break the ice. Everyone needs a defining characteristic that sets them apart from the crowd.

She sees them out on the balcony, smiling and laughing with such great diction and composure. She wonders at what point in their lives they figured out how to act like that, and why no matter how hard she tries she never seems to be able to replicate it herself. But that won’t stop her from trying.

As she enters the balcony she stretches a smile across her face. It’s time to smile. It’s time to kiss people on the cheek. It’s time to be in Paris and demonstrate all the great qualities she has to offer to this group of women.

She knows the ladies greet her in a different way than they greet each other. It’s forced, coddling. Under the wrong circumstances it terrifies her; like the sound of a firing squad cocking and aiming their weapons. She begins to make her hugging rounds, steeling herself against the first volley of empty friendly gestures.

“You look so sexy!” Brandi says.

“Your little nose in Paris! I love that!” Lisa says.

Kim puts on her “who, me?” face, and poses for Lisa once again. Even weeks after the bandages have come off, she’s still very aware of her nose, and she’s glad that Lisa is still giving it a little bit of recognition, but it’s already starting to feel like a new toy four months after Christmas. It was nice to be the center of attention for something positive and constructive for once, but she’s already dreading having to find a new Thing.

She makes her way toward Kyle and Maurice and is about to say hello, when the summer night breeze catches her hair unexpectedly. She looks out at the City of Lights, and her stomach drops as she realizes that they are surrounded by thousands of dead spirits rising up and weeping over the rooftops. Had they been there all along? They’re trying to tell her something, but their collective wailing is unintelligible, and too sad to listen too closely to.

“Why are you making that face? What — what was that?”

Kim whips her head back to Kyle and realizes her mouth is open, dry. She smiles and tries hard to shake off the daze and be present, even as the pale man in the balcony across the way stares at her, unmoving. “What? Nothing.” Her throat catches and she gags, then gasps. “It’s ’cause I felt like … ” she stops before she finishes the sentence when she sees her sister already looking at her skeptically.

“You gonna throw up? Is everything OK?”

“YEAH!” Kim laughs, tossing her hair over her shoulder like she practiced for that Prell ad she ended up not doing in ’84. She knows that Kyle can sense something is up, but to be fair, she has a very good excuse.

“What time did you get here, Kim?” asks Lisa.

Kim tries to ignore the old woman with the burnt-off face crawling toward her over the edge of the balcony. “I got here … last night!” she laughs

Lisa didn’t get her joke. She clears her throat and tries to answer straight. “This afternoon.”

“I’ve been here for days, Lisa,” Kim says with a head tilt as a dead child’s ice-cold breath brushes her ear. Lisa and Ken stare at her, unresponsive. The wind picks up, the spirits get louder, and her skirt starts to billow with ghosts.

There’s a great boom of fireworks in the distance, which doesn’t even startle Kim, as she is preoccupied trying to keep as much distance between burnt-face and herself as possible. These ghosts aren’t as aggressive as the ones in her old house in Westlake Village, but there are a lot more of them. Probably because Paris is such an old city. It collects more ghosts over time, whereas the ghosts in California are more spread out. There are a lot of differences between Paris and Los Angeles, actually. She was looking forward to discovering more of them during their vacation.

The ladies all put their arms around each other as they look up at the fireworks. “It’s so pretty, it’s like raining diamonds,” Kyle says. For some reason the metaphor fills Kim with sorrow. In the bright lights of the explosions she can barely see the spirits anymore. Maybe they’re gone for good, but she doubts it. 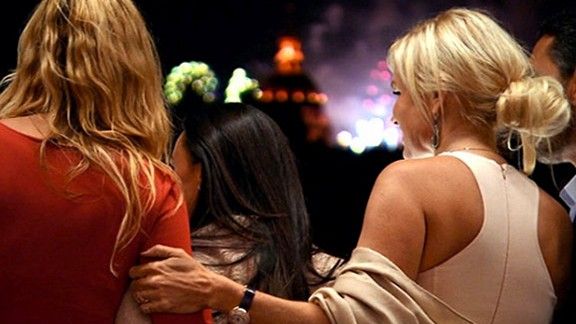