The Saddest Thing That Happened Last Night on The Real Housewives of Beverly Hills: Paint It Black 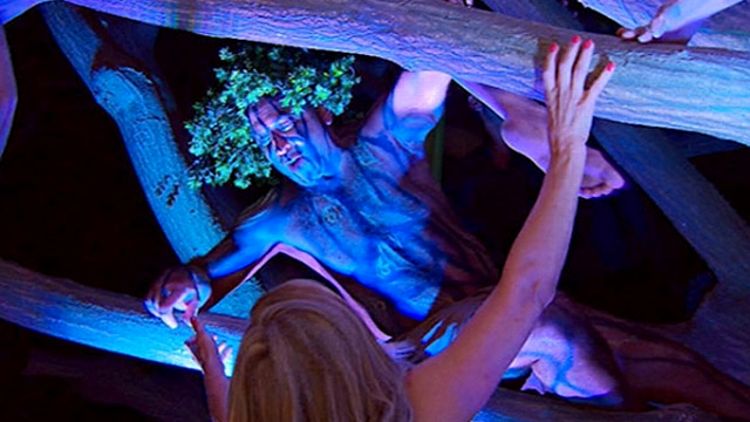 Adrienne turns back to the hedge and grabs another Zing vodka shot from the human hand protruding from it, then downs the shot and takes a moment to look around. It feels great to have all these human bodies around pretending to be inanimate objects and serving her things. The other wives had thrown some lavish parties over the past couple of years, but none of them ever had body painting. And when it comes to ambience, body painting is about as classy as it gets — there are market values for a chocolate fountain or an ice sculpture at the center of a room, but an actual person that’s willing to get naked and submit their entire physical self to the cause of making your party awesome? You can’t put a price on that. (Well, maybe $50 per head plus the obvious perk of industry exposure.)

What’s truly great is when you’re with your friends at an event with body painting, and eventually everyone is able to tune out the naked people and just relax and talk shit about everyone like normal. Kyle always has to gawk and make a big deal about everything, trying to maintain the illusion of being down-to-earth and somehow more “real” than everyone else, but girls like Camille and Faye are comfortable with the idea of purchased nudity, and that makes Adrienne feel like she’s among refined company. And her husband? Don’t even get her started. Hanging around in the kitchen, making jokes about using paper plates — this is a serious event for her really important vodka launch, not a time for attention-starved antics.

But Paul seems to have disappeared since then. Maybe he finally figured out that he was going to be out of place at an event like this. Took him long enough. She spots one of his friends and flags him down, just to make sure.

The friend shrugs and looks around. “He seemed upset, he left.”

Adrienne smiles, fascinated. “Upset about what?” How clueless of him to bring emotions to a party with body painting! Just more evidence that this was not his kind of event.

Adrienne shakes her head, trying to figure out if she should be embarrassed. This seems like a dramatic situation, but she’s not really interested in pursuing it — getting caught up in a plotline with her husband is such a boring look. Even more irritating was that Paul had promised her he wouldn’t bring up their marital issues on camera, so this is totally off-script, and she’s left without a line.

She’s about to go back to the other ladies and find a conversation that she can actually sink her teeth into, when someone taps her arm and points upward. She looks up at the trees and sees a fleshy, Bacchus-like figure reclining among the branches. He is really quite out of shape; she hopes they’re not paying him as much as the other models — oh, goddammit, it’s fucking Paul.

As soon as she recognizes him, everyone bursts into laughter. “Are you serious?!” she shrieks, trying to sound amused. She wants to strangle him with that ridiculous wreath around his head — how dare he make such a mockery of the art of body paint? A million insults of varying quality are firing off in her head, but she manages to choke back her rage. “I’m looking at these beautiful people, and then … I see you,” she finally stammers.

Paul says nothing, only chuckles, his glistening painted belly jiggling for all to see. Three weeks later, he and Adrienne file for divorce.

“As long as he’s getting attention, and you’re feeding his ego, he’s happy,” she tells us later. “He actually kinda looks a little pathetic.” The insult is out of her mouth before she knows what she’s said. She smiles for a second, taking a moment to determine if it felt good to say it or not. Was it cathartic? Did it make her feel worse? Adrienne shrugs, struggling to raise her eyebrows in an effort to indicate intentionality. She is now fully adrift. Nobody cares how she feels, least of all herself.

Afternoon Links: James Franco Wants You To Be Quiet