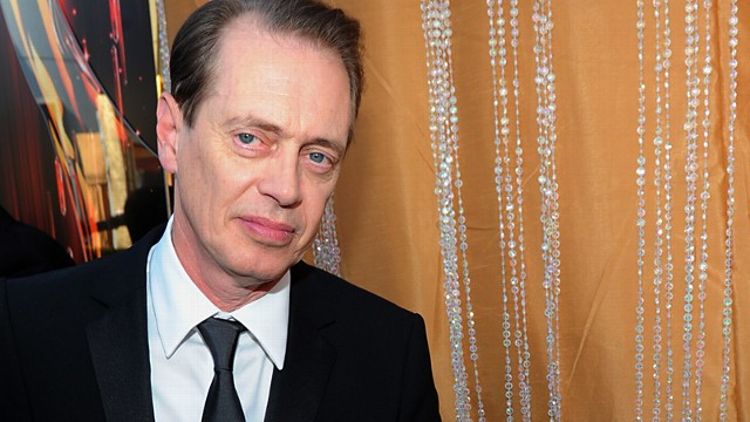 In the Sundance heyday of the late ’90s, the ubiquity of Steve Buscemi was something that hip people — the sorts who knew his name and how to spell it, as opposed to the casual moviegoers who just felt a twitch of happy recognition at the appearance of that magnificently puffy gaze with its implication of a hangover (not merely enduring, but existential) — joked about over post-cinematheque maki rolls:

“Is it even possible to get an ‘art’ film green-lit without Steve Buscemi? It’s like there’s a secret law in the Hollywood Rule Book, the ‘Buscemi Proviso,’ which decrees that every script has to include a role for him. Dude is everywhere.”

“A theory, chum: Steve Buscemi is the physical embodiment of the green light. He’s the human cigar that gets fired when the foreign financing drops into place.”

What was, and is, so annoying about such smug talk is that it trivializes the greatness of the most memorable, unconventionally charismatic, and intelligent character actor at work in film and television today. He’s been funny (Reservoir Dogs) and he’s been acerbic (Ghost World). In The Sopranos, as the trying-to-be-good Tony Blundetto, his portrayal of recidivism was as brilliant as it was upsetting. With his lead role as Atlantic City gangster Nucky Thompson (Boardwalk Empire), Buscemi has emerged as an antihero for the ages, noble and wicked and cool, and proved that he truly can play anything, even a star. And who else has appeared in so many Adam Sandler films (Billy Madison, The Wedding Singer, et al.) and escaped unscathed? Steve Buscemi is the little black dress of cinema, appropriate for any occasion.

Which is to say, it actually should be impossible to get a movie green-lit without Steve Buscemi; there really ought to be a law against scripts that don’t reserve a part for him.

The self-evident problem with this approach is that there are more stories than Steve Buscemis to go around. This is where the directors and casting directors enter the picture. They need Steve Buscemi a hell of a lot more than he needs them — and by “they,” I mean every single one of them. Just because it’s physically impossible for Steve Buscemi to be in every movie doesn’t mean he’s not capable of dramatically improving them all.

To demonstrate this principle, and to remind moviemakers of what’s at stake, I’ve assembled a group of eight examples, films varying in quality from near-classic to the iffy, across genres and plucked from several different decades of cinema, where casting Steve Buscemi could’ve reaped major dividends.

Moonrise Kingdom is very likely the best movie of last year, representing a new level of achievement for director Wes Anderson. Kingdom’s adolescent love story is tuned just right — ridiculous and beautiful — and in tandem with the gilded, museum-like production design that is Anderson’s hallmark, the film succeeds in evoking the weirdness of puberty like few others before it. No artwork is faultless, however, and the blemish on Moonrise Kingdom arrives in the shape of the adorable Bob Balaban. Dressed, adorably, as an old salt in a bright-red watch cap, Balaban appears every once in a while, primarily to offer gratingly theatrical (and unnecessary) exposition about the legendary storm that serves as a key plot device.

In defense of Balaban, it’s hard to separate the performance from the role. For the many accusations of “tweeness” in Wes Anderson’s films, this is a rare, legitimate example; Balaban’s narrator is a matchbox and a scrap of felt away from being an anthropomorphic mouse on a Disney World ride through Itty Bitty Critter Land.

A far better choice for the part would’ve been Steve Buscemi. No costume can ruin him, and he’s never, never, never theatrical. The closest he’s ever come to cute was when Peter Stormare was feeding his leg into the wood chipper in Fargo.

The idea of a romance between a terminally ill Winona Ryder moppet and Richard Gere is plainly dumb. It was a producer’s fantasy from the get-go, and everyone knew it, which was why Autumn in New York was a joke before it even came out. Winona wasn’t dying; she’d just had a sweet new haircut.

The point of suggesting Buscemi for her part isn’t to make a gay joke. It’s an attempt to find a dynamic that’s a little original and surprising. One of Buscemi’s underrated qualities is that, although he never appears to be more than half a Marlboro away from lung cancer, he can be incredibly charming. If he can make you believe that Kelly MacDonald could fall for him in Boardwalk Empire — and he does — then he can make you believe that Richard Gere can fall for him. Moreover, the pairing of Buscemi and Gere interests in a way that Ryder and Gere never could. The Ryder-Gere match, where a beautiful young woman falls for a well-preserved rich older dude, is familiar as well as depressing. The idea of a rumpled urban guy having a love affair with somebody like Richard Gere is hardly fantastical, but it’s something we’ve not seen enough of in the movies.

Although it’s depressing to admit this, more than a handful of post–Donnie Brasco Al Pacino roles would have been better served by Steve Buscemi. Pacino is actually OK in The Devil’s Advocate. The problem is, there’s no melancholy in his Satan. Being Satan would undoubtedly have its perks — fucking with Keanu Reeves surely high among them — but getting pitched out of heaven by the bouncer on high is the sort of ego blow you never get over. On top of that, there’s the grind of always having to be so wicked. Satan must get worn out sometimes. Who knows, maybe there are days when even the prospect of terrorizing Keanu Reeves isn’t enough to put a smile on Old Scratch’s mug. (OK, maybe not.) Steve Buscemi is my choice for a still extremely evil and charming yet melancholy Satan.

It’s dicey to tamper with a movie that’s already good, and this is a very, very good movie. The broken-up-detective-in-an-animated-world premise is so adroit/crazy, and Bob Hoskins is just a masterpiece. But I do question whether Fleischer’s over-the-top take on Roger Rabbit was the best route. A Jessica Rabbit–Steve Buscemi romance fascinates me, and only makes the question of sex between flamboyant cartoons more bizarre and titillating than it already is. (To be clear, I’m suggesting Buscemi only as the voice of Roger Rabbit. The story doesn’t make sense if Roger’s a human being.)

Kenneth Branagh made several unhappy casting decisions in his up-and-down, cameo-ridden adaptation of Hamlet, starting with the unsavory (and super symmetrical) soul patch that he chose for his own face, and extending through to the heartbreakingly out-of-place Jack Lemmon as Marcellus. Ideally, we’d find a way to insert Steve Buscemi into multiple roles here, but if I had to pick a single part, I’d opt for First Gravedigger, who produces Yorick’s skull for Hamlet’s great reverie. (“Alas, poor Yorick! I knew him, Horatio … ”) Though I’m not completely resistant to the appeal of Billy Crystal, his is a barely passable turn at an important moment; his accent is poor, and he’s annoyingly handsy.

Meanwhile, what actor makes more sense as a gravedigger — a philosopher’s career choice, if ever there was one — than Steve Buscemi? Recall the maniacal non-tipper Mr. Pink in Reservoir Dogs. Who would give a more perfectly off-hand reading to the question of tanners’ corpses’ unusual toughness than Mr. Pink?

One corollary of the wretchedness of the second trilogy of Star Wars films has been the final, demented sanctification of the first trilogy of films. The original films were — and let’s please try to be honest about it, this one time — not that superb. They were exciting and cleverly constructed, but they were also hokey, and built upon the pulp tradition, as opposed to being a truly groundbreaking piece of science fiction à la Asimov, Clarke, or Ballard.

A perfect example of Star Wars’ limitations can be found in C-3PO, the neurotic, gold-plated, English-accented robot that appears in every film and is basically a straight-ahead interpretation of the loyal butler archetype. The robot’s endless bitching is a cliché so ancient and inert — wimpiness signified by Britishness — that to even attempt to defend it is to reveal oneself as a desperate, intellectually dishonest Lucas apologist.

If we put Steve Buscemi in the role, as a human-appearing cyborg so he doesn’t have to wear the Tin Man costume and so it’s not so odd that he should have personality, the character instantly becomes less embarrassing. Picture a cyborg Steve Buscemi, bound to serve his human masters, trudging alongside the oversize soda can that is R2-D2 — and that, that is some new hope.

I’ve never been able to fully embrace To Kill a Mockingbird. The production has many praiseworthy elements: It’s clean and crisp, the relationship between Scout and Jem is well drawn and well played, Robert Duvall is a fine Boo Radley, and its rendering of the racism of the legal system set against Tom Robinson is, considering the time the film was made, pretty hard-hitting. What bothers me about Mockingbird is its most famous ingredient: Atticus Finch as played by Gregory Peck. I mean, come on — Gregory Peck! He makes George Clooney look like Clint Howard. Have you ever given a thought to why teenagers often nickname their biggest, strongest, and best-looking friend “Greg Peck” or “G-Peck” or “Peckster”? (OK, I made that part up.) It’s too damn easy for Gregory Peck to do the right thing — he’s Gregory Peck!

Role: The Wizard of Oz, originally played by Frank Morgan

Of all the roles that Steve Buscemi might have played, none tantalizes me more than cinema’s seminal fraud, the Wizard of Oz.

Again, it’s risky to bet against an entirely acceptable, and in fact quite appealing, performance such as the one that Frank Morgan gives in Oz. Morgan’s choices are a little big for my taste — he flails and transitions from bluster to abject defeat without a break — but Morgan was able to pull it off.

Still, the idea of Buscemi as the Wizard feels so, so right. If you try to imagine a figure of immense power, what you don’t envision is a character that Steve Buscemi would play, which is exactly why he’s ideal. Because, as we all know, the Wizard of Oz is actually just a guy at a machine, yanking levers and talking into a microphone. He’s not the “great” anything; he’s a bum and a hustler, and worst of all, no one knows it better than the Wizard himself.

Steve Buscemi was born to play the man behind the curtain.

The Saddest Thing That Happened Last Night on The Real Housewives of Beverly Hills: Paint It Black