What Gangster Movie Am I Thinking About? A Flowchart 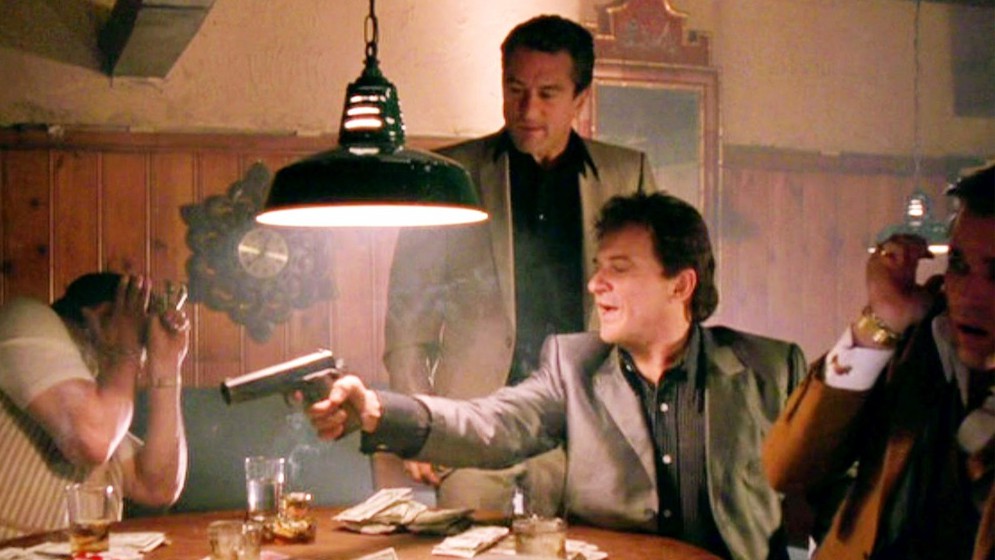 I’m going to tell you about an actual conversation that I had in 2006. I remember it very clearly because it was embarrassing for me.

It was my first year teaching and all the new teachers (there were seven hires that year) were at school a couple of weeks early, before the students arrived, so we could do new teacher training. We were on a short break and some of the people there were standing in a group talking. I didn’t know any of them, but I joined them because while I do not especially care for standing, I do like people and I do like talking and if a situation is made up of more than 65 percent of things that I like then I try to involve myself in it.

So I walked up, stood there for a moment in silence, and things were going very well for me. Then, unexpectedly, one of the more outgoing people there attempted to include me in the conversation. She said, “What about you, Mr. Serrano? Did you like Lean on Me?” Now, this caught me off guard a bit. What I didn’t know was that they were talking about movies about teaching,1 and I certainly didn’t know I was going to be asked to contribute an opinion about them. So when I answered her, I didn’t answer her thinking about Lean on Me, which is a movie where Morgan Freeman plays a principal who turns a school around by yelling at everyone. I answered her thinking about Stand by Me, which is a movie about four boys who hike through the woods to go see a dead body.

Everyone just sort of stood there not doing much of anything, and it was awful and confusing (I didn’t realize I’d mixed the two movies up until an hour or so later). After a couple of seconds of quiet, the same person who’d asked me about the movie turned the conversation a different direction, and shortly after that I walked away and sat down and didn’t bother trying to talk to anyone at work again for five years.

So what’s the point of this story? The point is this: There’s a new gangster movie coming out today called Black Mass and I imagine people are going to spend a fair amount of time talking about it and other gangster movies in the coming days. The 10 or so most iconic ones, they’re all easy to get confused because they almost all have the same actors in them. And I don’t want that to happen to you. I don’t want your coworkers talking about Casino during lunch break and then you walk up like, “My favorite part was the Go Get Your Shinebox scene” and then, oh great, now you’re the laughingstock of your office and your wife cheats on you and your legs fall off. So I made you a What Gangster Movie Am I Thinking Of? flowchart. It’ll help you keep organized all the gangster movies in your head. It’s very simple to follow. Look:

• I made this using what are largely considered to be the 10 most iconic gangster movies: The Godfather, The Godfather: Part II, Goodfellas, Casino, Scarface, Donnie Brasco, A Bronx Tale, The Untouchables, The Departed, and Once Upon a Time in America. I also included New Jack City in the chart as no. 11 because I care about that movie a great deal and would argue that it is better than at least three of the other movies listed (and goofier than all of them).

• Of the Gangster Movie Big Ten, the only one that doesn’t have Joe Pesci, Al Pacino, or Robert De Niro in it is The Departed, yet none of them have all three in it. That’s a neat stat. I like that stat.

• People forget that Joe Pesci is in A Bronx Tale. It’s because he has such a small role in it. (He has a total of about two minutes of screen time.) I’ll never forget, though, because I’ve seen A Bronx Tale about 600 times. It’s so good. It’s a low-stakes gangster movie, yes, but it revels in its own minutiae so well that it overperforms itself on each watch. Its best scene, the Now Yous Can’t Leave scene, is endlessly enjoyable:2

• My two favorite Goodfellas anecdotes: (1) You know the scene where Pesci’s character shoots that kid (Michael Imperioli) in the chest? While they were filming that, Imperioli cut his hand on glass. They took him to a hospital ER. The doctors there thought he’d really been shot in the chest and tried to treat his wounds. (2) There was a brief moment when Martin Scorsese considered Tom Cruise and Madonna to play Henry Hill and Karen Hill. Reading that for the first time doesn’t feel any different than reading that Tom Cruise and Madonna were considered to play Martin Luther King Jr. and Coretta Scott King in Selma, which probably happened, too.