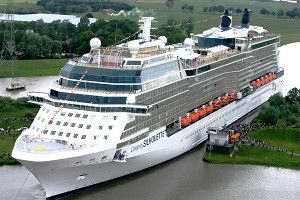 From the Weezer Cruise to Holy Ship! to the — oh goodness me — R. Kelly Love Letter Cruise, the last few years have provided us with a rash of concert cruises contradicting the stodgy, stuffy stereotype of the institution. And now comes the trend’s inevitable peak. Goldenvoice, the folks behind king of the jungle music festival circuit Coachella, have announced a seaborne counterpart to their main event. That’s right: S.S. Coachella sets sail in December.

The details, via the New York Times: “Both voyages leave from Fort Lauderdale, Fla., with a three-day tour going to the Bahamas on Dec. 16 and a four-day journey to Jamaica starting on Dec. 19. For fans willing to pile four to a cabin — the closest thing to camping when it comes to high-seas travel — prices start at $500 a person, and there are nine other price levels, going up to $9,000 a person for a ‘sky suite’ with veranda.”

By the way, for anyone who’s been onboard any of the droopier cruise ships making the rounds, you can take comfort in Goldenvoice’s fussiness. “Goldenvoice … resisted jumping on the bandwagon until it found what Paul Tollett, its president, described as the perfect vessel: the Celebrity Silhouette, a 1,000-foot, 122,000-ton ship with room for 2,800 fans, cabana-style alcoves and a small theater that Mr. Tollett called a ‘mini Royal Albert Hall.’ ‘It even has a half-acre of grass,’ he added. ‘It wouldn’t be Coachella without grass.'”

And your inaugural S.S. Coachella lineup (via Billboard):

OK, so, yep, all looks and sounds great. But here’s the question: Does the announcement of the Coachella cruise mean the trend is so strong that we are eventually going to get to a point where multiple hip music cruises are making the rounds simultaneously? Will the waters eventually be crowded with just such vessels, each with their corresponding genre choices represented by ominous pirate-type flags? And will these ships eventually begin squabbling over maritime territory and jurisdiction, to the point where, along with all the trippy art installations and MDMA, actual old-timey cannons are brought onboard, just as a last recourse? Let the Great Music Cruise Pirate Wars of the 2010s begin!

Political Animals: Hitting Below the Beltway