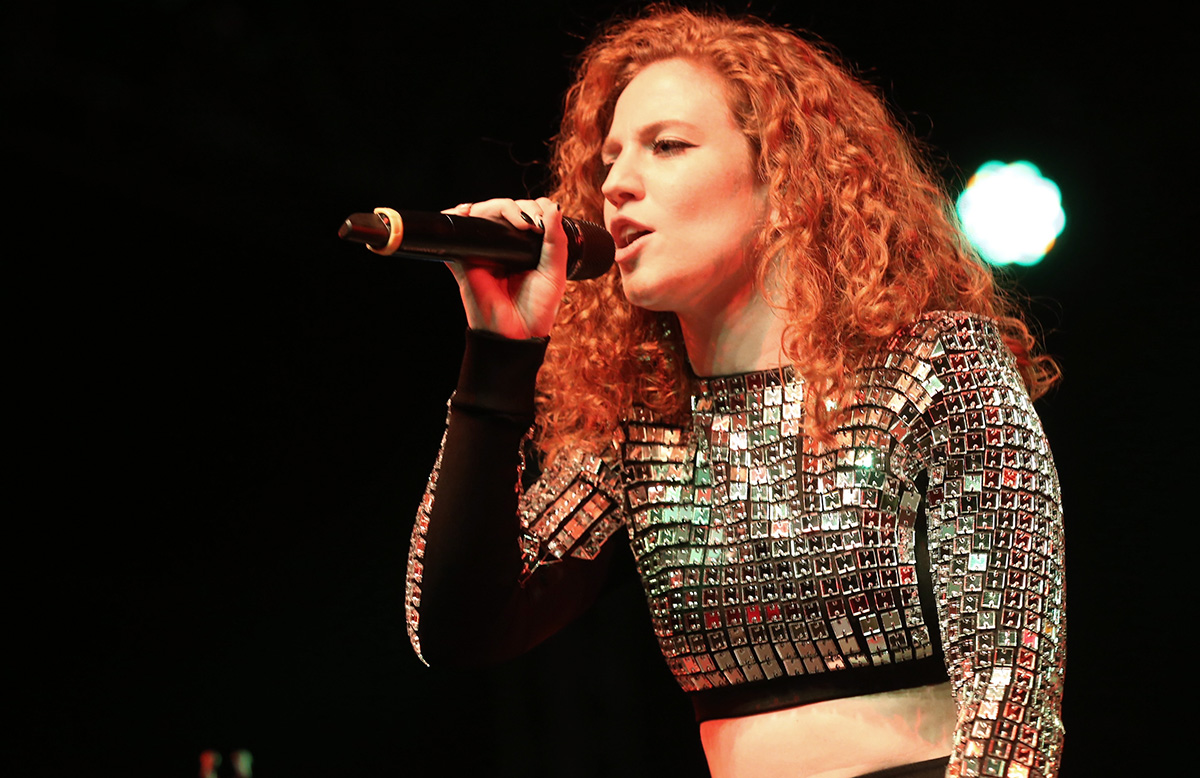 You’ve probably heard at least one Jess Glynne song, even if you didn’t know it. The 25-year-old Londoner is the voice on “Rather Be,” the song by classical electronic act Clean Bandit that debuted at no. 1 in the U.K. and eventually climbed into the top 10 in the U.S. last summer. Now a Grammy winner, and with her own song “Hold My Hand” sitting atop the U.K. charts for the past three weeks, Glynne talked with me at Coachella about what it takes to break out after providing vocals for a dance track, the small changes that come with newfound fame, and how she almost passed on the hit that launched her career.

Before “Rather Be,” before you even got signed by Atlantic, what were you doing?

I was working for an alcohol distribution company. I was a brand-experience supervisor. So I basically took teams of people around and was selling new alcohol brands. Patrón — Café Patrón — was a big thing, Jägermeister, we did all sorts of events. It put me off drinking. [Laughs.]

Click here for all of our interviews with fascinating people from the worlds of sports and pop culture.
I was doing that job, I was also doing an artist development course,1 and I was also writing and recording and stuff. Basically, I met this girl called Jin Jin2 [during the course], and we got in the studio and wrote a song called “Home,” and a few other songs as well. They wanted to sign my publishing, her and this other guy, they’d set up this company alongside another bigger company. People heard my stuff, I put a SoundCloud [page] together, and people just basically started sending stuff out.

I met this guy called Joe Gasser and he’s a publisher [with] BMG and Black Butter Records. He became my mentor for ages. I wanted him to be my manager, but he was adamant it wasn’t the right thing. Basically, he kind of started everything for me, and he’s the reason I’m here now. Through him, I met a new lawyer, and from there, I met my management. And then Atlantic heard my stuff and wanted to meet me, and it all went from there.

Do you remember the timeline with “Rather Be” — who called you to mention it?

Well, my A&R called me and was like, Clean Bandit — we’re signed to the same label — they’ve heard your stuff, “Home” and this other song “My Love,” and they wanted to use my voice. I told them to send me the demo, and the demo was kind of shit at the time. It was just a singer that didn’t suit the song. And originally, I was quite adamant that I didn’t want to do it, because I didn’t write it. I had never sung a song that I hadn’t written before. So I was quite scared. Then I got in the studio with them and made it happen and made the song feel right for me and for them. It was one of the best things I’ve ever done.

Do you remember where you were when you heard the finished, final version for the first time?

Yeah, I got sent the MP3, and I remember hearing it.

So on your computer?

Actually, it was on my phone. And then I remember the first time I properly heard the song was on the radio. That’s when I really heard heard it, do you know what I mean? And that’s when I was like “Wow, this is real.”

Was there a moment after that when you thought, I can’t believe this is happening?

I’d say [when] “Rather Be” got nominated for a Grammy.

Were there ever instances when people would ask, “Have you heard this song?” and you had to awkwardly tell them it was you?

Yeah, it’s actually happened a few times. Last year, I didn’t have a lot of my own stuff out, and in the videos, I wasn’t in them. So people, we’d be talking and what have you, and I’d be like, “Oh, I’m blah blah.” And they’d say, “Fuck! It’s you. Oh my god, you sing ‘Rather Be.’” Whereas now, I’ve got my own material out, and I have my own thing. It’s a lot more recognition. Even just now, I was walking along, and I heard someone say,3 “Oh my god, that’s Jess Glynne.” To me, that’s crazy. I’m in America. Like, what the fuck?

What’s been the biggest change in your life?

The biggest change is that my life is consistently moving at a pace that I’m not used to. I don’t see my family much, or my friends, and I’m not home hardly ever. So in that sense, it’s changed a lot. I don’t go to the pub as much as I used to, I don’t do the normal things I used to.

I love it. It’s what I dreamt of doing. I’ve wanted to come to Coachella for years, like when Jay Z headlined, and Outkast last year. I’ve dreamt of coming for so many years. And the fact that I can come here and this is for work, it’s like amazing.

Is there any part of it that you thought would be great that you’ve found you’re a little apprehensive about?

The only thing about the whole journey that I find difficult is the pace and the time. People who are fans and people who are outside don’t really understand how hard we work. My song is sitting at no. 1 in the U.K., and, for me, that is the most amazing thing.

I mean, is that strange? A part of that has to be weird.

Especially on my own. It’s fucking weird. Two weeks at no. 1 is just like, “What?” When I found out, I was in tears. Because I’ve worked so hard. I’m here, I’m there, I’m doing a million things, and I don’t think people quite see that. They just see the artist, go onto iTunes, and go to the chart. But everything that I do, even here today, I haven’t been out at the festival going to shows and stuff.

Yeah, you’re talking to me.

And I’m not complaining at all! Because it’s what I have to do to make it work. When you have a no. 1 or when your song does well, and when you have somebody go, “Oh my god, that’s Jess Glynne,” those moments are the best thing. Because what you’re doing is paying off.

And where were you?

I was in London with Jin Jin. I planned basically to go out for dinner and drinks that night, regardless of where the song charted. They called me early in the afternoon, and I was sitting in a place called Sketch in central London. I got told, and then I listened to the radio to hear the official charts. They announced it, we both had a little cry — Janee kind of started, and then I started. And it was like [crying noise], and yeah, that’s what happened.

So did you change your dinner plans, kick it up to a nicer place?

No, we stayed there, I carried on eating, I invited people. We drank, we drank, we moved it to somewhere else, we went to Shoreditch House, had more drinks, and then we went to the studio and had more parties. It was just a really good night.

Oh god, that’s fantastic. So when the album comes out, and you actually get to hold it in your hands, what do you think that’s going to be like?

I’ll probably cry. I cry at everything. When I find things amazing, I just cry. Like, things that really mean a lot to me make me cry, happy or sad. I’ve dreamed about having an album my whole life, so when it comes, I think I’ll be an emotional wreck.

How it all happened with “Rather Be” — you get to do the vocals on a dance track, it blows up, and your career goes from there — seems increasingly common for singers.

I think it’s such a big thing, and I think it’s amazing, but I also think there are so many of them now that it can be irrelevant who the artist is that’s singing. It’s come to a point, I feel, that people don’t care about the artist who’s singing anymore. It’s just the name of whoever’s doing it. I don’t know if that’s a good thing or a bad thing, but I think it’s an amazing platform. And I couldn’t be more grateful.

In a way, you were one of the lucky ones. Your name carried beyond that song, and you just don’t think that’s happening enough?

I think it is, but because people are so used to that now, it’s not as much. I think it’s sad in a way. I hear songs, and I always want to know who’s singing it if I love it. So I’ll always go check that person out. But I think now, it’s become more casual to just be like, “That’s the song.” Which in itself is great anyway because the song is getting the love it deserves. Producers are just getting a lot more recognition these days.

It seems like if you’re good enough, someone is going to be like, “I want to know who that is. I want that voice.”

That’s the thing, I think if you are good enough — and for me, so many people are doing it — and as long as you have your artistry solid and imprinted, you’re gonna go. And I think that’s the answer to that, actually. Thinking about it, there are so many people, but I think that when you’ve got that thing, when people go and research you and you’ve got solid shit behind it and it’s strong, you’re gonna go.

When you were growing up, who did you kinda want to be like?

It’s such a weird thing, because when I was growing up and I used to sing, I didn’t know it was a talent. I didn’t know it was something special. I’ve always had quite a deep voice, and I didn’t know that singing was really special the way I sang. At school, I even shied away from it because I didn’t think I was that talented. Listening to those songs, I’d imitate them. I’d get Mariah and Whitney and I’d get a tape player, back in the day, and I’d record myself singing on tape players a cappella, and I’d listen back thinking, I’ve got to get the right note, I’ve got to get this. And do you know the one thing about all those singers? They’ve [got] just such depth to all their voices, and such emotion. And I always connected to that. My album is soul-infused. It’s feel-infused. Every song, I feel it, and I think people feel it. Because when I perform it, it gets people going.