Political Animals: Hitting Below the Beltway 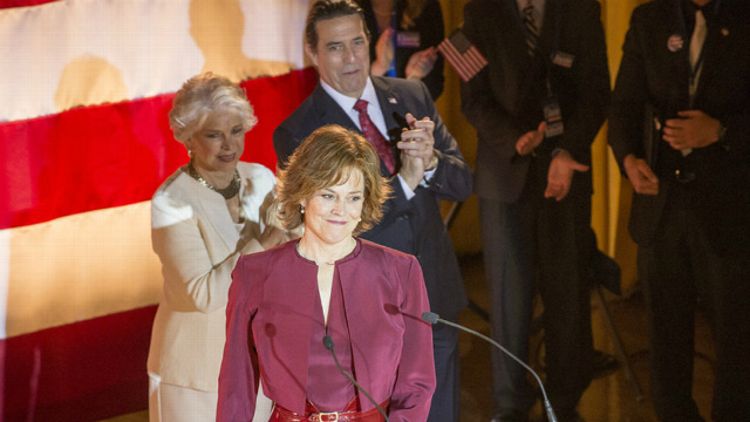 It’s impossible to consider Political Animals, USA’s surprisingly ambitious limited series that premiered on Sunday, without mentioning its time-slot competitor, The Newsroom. Like Aaron Sorkin’s ode to the anchor desk, Political Animals is set in a familiar sidewaysverse, a very recent past or near-present in which a charismatic upstart has captured the White House, partisan rancor seems insurmountable, and, while smartphones exist, expository monologues remain the most popular form of communication. But if The Newsroom exists to show us how things should have been done, Political Animals cannily prefers to show us what they could be. Rather than primly sitting on the sidelines with those who once bought ink by the barrel (and now produce pink slips by the truckload), PA dives right into the messy, wholly imagined world of the headline-makers. This decision makes all the difference: It’s far more pleasurable to be asked a question than told the answers. And while it may be unfair to compare the two — especially considering that the soapy, silly Political Animals appears to be just the sort of frivolous indulgence that St. Will McAvoy would toss off his balcony in disgust — in politics, as within the fictional Hammond family, everything is relative.

Created by Greg Berlanti — who has tread similar terrain before, be it familial (Everwood), fraternal (Jack & Bobby), or far-fetched (Green Lantern) — Political Animals concerns the incestuous exploits of the Hammonds, a bigger-than-life Beltway power-family now experiencing a positively Clintonian reversal of fortune. As the show begins, it’s stoic Elaine Barrish who is ascendent, a formerly loathed First Lady now graciously conceding the Democratic primary to a handsome guy with vowels in his name (Adrian Pasdar’s blank slate Paul Garcetti), then letting her hair down and boogying all the way to the State Department. As played by the regal Sigourney Weaver — all plummy syllables and repressed emotions — Secretary Barrish is an impressively statuesque straw, but the drink mainly stirs itself around her. Those sozzled swimmers include Elaine’s tipsy jazz-singer mom (a game Ellen Burstyn) and improbable twin sons. Douglas, the good one, is played by smiley Lone Star survivor James Wolk. TJ, the bad seed, is captured by Sebastian Stan (Captain America), who snorts up everything in his path, be it scenery or the white powder that’s perpetually in his pocket. While Wolk has little to do at the outset (other than attempt to balance his mother’s schedule — he’s her ambitious Chief of Staff), with his looming engagement to the pretty, secretly bulimic Anne (Brittany Ishibashi), Stan’s a welcome hot mess: the first openly gay child of a sitting president, he’s got a suicide scandal waiting to blow and an endless Grindr inbox of anonymous dudes ready and willing to do the same.

And then there’s Bud Hammond. As the ex-president (and ex-husband: in a neat bit of “You Go, Girl” fan-servicing, Berlanti has his Hillary drop-kick her straying Bill the second her campaign ends), Irish actor Ciaran Hinds is so over-the-top ridiculous he should come served with a side of boiled cabbage. Oozing this morning’s bourbon, casually tossing off anti-Italian invective, and barely harnessing an unruly Southern accent that falls somewhere between Paula Deen and Boss Hogg, Hinds’s Hammond couldn’t get elected fry cook, let alone to two terms of the presidency. (Reports that Bud is meant to be as much LBJ as Bubba alleviate the insanity, but only slightly; LBJ was never reelected nor particularly beloved.) Still, this near-disastrous snake-oil spill does at least function dramatically when paired with Weaver’s long-suffering noblesse. It’s the same staggering mix of chaos and competence that’s made the Clintons appointment viewing for over two decades.

Added to an already frothy cocktail is Carla Gugino as Pulitzer Prize–winning gadfly Susan Berg, a confusingly employed reporter who is also, somehow, a Maureen Dowd–esque columnist and scold, the author of a poorly received book about “fourth-wave” feminism, and, apparently, something of a has-been. Gugino is forced to deliver the show’s least self-aware joke when she admonishes a backstabbing blogger for being “hot” enough for hundreds of other fields, including stripping — this from a smoking actress whose most recent film credit is as a porn star! (The second-least self-aware joke is more subtle, but something straight out of The Newsroom: Both shows cling to the AOL-era belief that all “real” journalists regard the Internet the way smug dinosaurs viewed the meteor, and the scheming Tumblrette who steals first Susan’s scoop and then her man is a new-media cartoon. Come on, now: Jobs are jobs!) But she’s also by far the best thing in Political Animals, a nervy blend of brass and brains able to elevate the pilot’s creaky machinations with a single raise of a perfectly skeptical eyebrow.

It’s a move viewers will probably be practicing at home as well. All the busywork needed to introduce these moving pieces and jam them up against each other — inviting the loathed Berg to an intimate dinner at Chez Hammond seems like a bit of a stretch, for instance — can be exhausting, and Berlanti’s preferred breezy tone can be off-putting for those who usually spend their Sunday nights on networks other than ABC. (The guy seems physically incapable of letting a scene end without shoehorning a sassy Motown tune into it; it’s not hard to imagine his script pages arrive outfitted with more flop-sweat lines than a “Cathy” strip.) Weaver, never the most empathetic actress, is here to be admired, and it’s not hard to do so while she gallivants around the globe, upbraiding horndog foreign ministers, outmaneuvering the overmatched (and woefully underwritten) president, and still finding time to look great in a gold ballgown. “I am sick of the men,” she huffs in the much better second episode, and “the fragile male egos that suck up all the oxygen in this town!” Still, contrary to Susan Berg’s book, this is essentially a second-wave feminist fantasy, and Berlanti trips himself up when he spends too much time on Elaine-as-victim. As anyone who’s ever seen Aliens can tell you, Sigourney Weaver doesn’t get sad. She gets even.

Yet despite all the convenient hokum — the Turkish minister who trades geopolitical favors for a date with the irresistible Madame Secretary, Gugino listening in on top-level talks with a leopard-print scarf around her head, anytime Sebastian Stan has his shirt off or sits in front of a piano – there’s something worth watching here. Politics has always been a hard sell on television, either presented as inspirational uplift or fertile ground for catty satire. What Political Animals has going for it is a full-throated (and, sadly, accurate) embrace of government as a grand and vicious game. It’s a world where winning is almost an afterthought; everyone is having far too much fun playing each other to care. Berlanti is also refreshingly honest about the inevitable connection between power and sex — it’s what tripped up Bo Hammond in the White House all those years ago, what clouds Elaine’s thinking now, and, this Sunday, what gets Susan Berg surprise entry into the Mile High Club. There’s far more carnality than sanctimony in our politics these days and, despite what Aaron Sorkin would have us believe, no amount of journalistic speechifying is going to change that. Political Animals is seriously flawed, yes, but it’s also fun, unafraid to get its hands — and everything else — seriously dirty. Unlike the pompous Will McAvoy, it’s on a mission to decivilize.