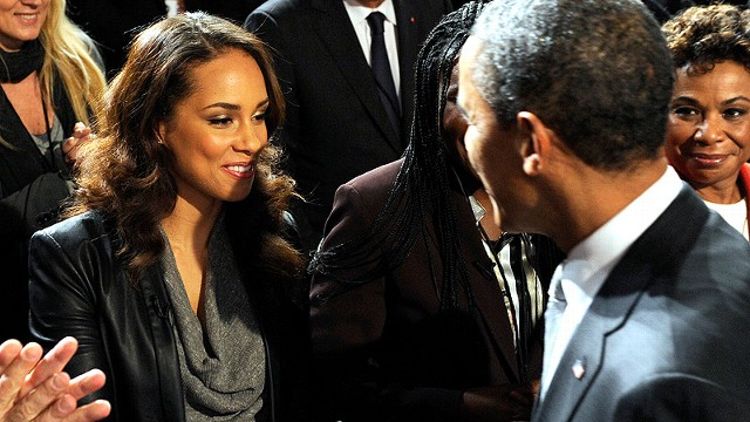 Over a week ago, an exhaustive list of individuals the Obama 2012 campaign hopes will help in some way, shape, or form leaked onto the interwebs. On this list are 194 individuals. Yes, that is a lot of people, but after a thorough examination, it becomes clear that the real beauty lies in the diverse array of humans who made the cut. Just to put it in perspective, if everyone showed up at the same party, it would be the most awkward, almost-200-person gala event in political history. Some of the names included are obvious and others make sense after thinking about it, but a considerable portion will have you wondering why you weren’t invited.

Because of every comical aspect of this document, I simply couldn’t resist the urge to give it the old line-item-veto treatment and give my two cents on each deserving/undeserving weirdo on this list.

(Parenthetical phrases are the individual’s job title, as described in the document)
(My sassy annotations are in italics. Sassnotations, if you will.)

will.i.am (Musician, Rapper)
Ridiculous, but I guess after that hologram stunt, you have to bring him along.

Jessica Alba (Actress)
The only excuse for this is that Malia just got hooked on Season 1 of Dark Angel. If it’s anything else, I don’t understand.

Laila Ali (Boxer)
No. Joey Fatone did better than her on Dancing With the Stars. No.

Odette & Dave Annable (Actors)
One of the girls from Cloverfield and the guy from Brothers and Sisters are married. What. A. Power Couple. If I see them on the campaign trail, Barack, I’m voting for Cain.

Arcade Fire (Band)
No. They’re Canadian. Is nothing sacred?

India.Arie (Musician)
Really, campaign? India.Arie still gets an invite in 2012? What happened, was Des’ree booked through Thanksgiving?

Ernie Banks (Sports Marketing/PR/Former Athlete)
I don’t know why, but I support this so much. Yes.

Sara Bareilles (Musician)
Only if she sings this.

Jeremy Bird (National Field Director)
Yes, if he promises to stop emailing me every Tuesday at noon.

Dewey Bozella (Boxer)
No. Get Floyd Mayweather and the Money Team instead. But whatever you do, DON’T BRING RAY J. It’s a matter of national security.

Laura Breckenridge (Actress)
Really? A girl who was in three episodes of Gossip Girl got the call? So confused.

Henry Cardenas (CEO, The Cardenas Marketing Network)
Nice. Just going to name the company after yourself, Henry? Real modest. Get this guy out of here.

Vince Carter (NBA Player, Phoenix Suns)
PAUSE. WHAT? HOW? WHY? HUH? TO WHAT EXTENT? This has to be a typo. They must have meant Vince Wilfork? No? Blue Ivy Carter?

Philip E. Carter (Chief Operating Officer)
I still can’t get over Vince Carter. Did they mean Vince Neal? No? The cast of Get Carter?

Shawn (Jay-Z) Carter (Musician)
Only if he brings the baby.

Steven Chu (Department of Energy)
Why?

Jamie Citron (Deputy Director of LGBT)
Yes. And while you’re helping out, make sure to remind Obama to mull over that whole gay marriage stance thing he still hasn’t figured out yet. THX BYE.

Chelsea Clinton (Philanthropist)
Her job title is listed as “philanthropist.” That’s cute. If I’m ever called up off the waiting list, make sure to list me as “CEO, Blockbuster Video.”

Bradley Cooper (Actor)
“The Sexiest Man Alive” is always an automatic bid. They had no choice.

Chris Cornell (Musician)
“The Former Lead Singer of Soundgarden” is always an automatic bid. They had no choice.

Robert Cray (Blues Musician)
His last name is “Cray.” That’s cray. Definitely get him on board.

Andrew Cuomo (Governor of New York)
Yes. This guy is my boy.

Richard Daley (Former Mayor of Chicago)
Chitown sticks together, for better or for worse.

Tim Daly (Actor)
And the list of C-list actors continues. ATTENTION: If you’re trying to get a call from the White House, work on being slightly below-average. If you’re above average at being below average, you’ll get the call.

Mark Dayton (Minnesota Governor)
A first name followed by a city in Ohio, no.

Donald Dell (Executive)
Tell me you didn’t read this and think about Donald Duck. I know you did. I promise. Yes, get this guy involved.

Shaun Donovan (Secretary of Housing and Urban Development)
Already have one misspelling of “Sean” with Jay-Z. We really don’t need two.

Rob Dyrdek (Professional Skateboarder/Producer/Philanthropist)
And the list of philanthropists grows. Also, how are you going to invite Rob and not Big Black? So rude. SO rude.

Eric Robertson and the Boston Boys (Band)
No. Switch them out for Three 6 Mafia.

Fergie (Black Eyed Peas)
The first rule of elementary school is that if you invite some of the group, you have to invite all of the group. How are you going to invite will.i.am and Fergie and not Taboo and apl.de.ap? I bet apl.de.ap is so sad. Poor, poor apl.de.ap.

America Ferrera (Actress)
I’m going to name my daughter “America” or “USA” or “This Land Is Your Land” or something, because apparently that’s a sure-fire way to stay influential, forever. There’s no other way to explain why Ferrera is still getting tapped by the President to do things.

Arnie Fielkow (CEO, National Basketball Retired Players Association)
Obama’s just trying to secure season tickets at every stadium with all of these basketball-related invites. It’s getting ridiculous. But yes, bring him along.

Jamie Foxx (Actor)
In my mind, Barack and Michelle watch re-runs of The Jamie Foxx Show in the White House every night. That, and Martin. And Living Single. And In The House. And almost forgot, Hangin’ With Mr. Cooper.

Al Franken (U.S. senator)
Sure, why not.

Whoopi Goldberg (Actress, comedienne)
Yes, if only for basketball/Eddie reasons.

Reagan Gomez (Actress)
Hold the phone. Is this the girl from The Parent ‘Hood? Wow. I’m going to need a 5-paragraph essay about how she got an invite, immediately. Wow.

Austan Goolsbee (Economist)
I haven’t thought about The Parent ‘Hood in 8 years, Goolsbee. Did you watch The Parent ‘Hood? Such a throwback. Goolsbee, you’ve got to go back and look it up. Such an average show. Wow, Goolsbee. Wow.

Al Green (Musician)
Reverend Al Green, you have already done your part. Thank you for your service.

J.I. Halsell (Director of football operations and analytics)
OBAMA LOVES SPORTS. I GET IT.

James Harris (CEO, James Harris Associates)
Am I the only one that thinks naming a company after yourself is extremely uncool? I mean, I understand it’s your company and you can do whatever you want, but why not be creative. James Harris could easily be the CEO of Maverick Iceman Goose Associates. So much cooler.

Anne Hathaway (Actress)
Oh, the most overrated human ever? No. Invite the T-Mobile girl instead.

Grant Hill (Basketball player)
Only if Jalen can come. No exceptions.

Eric Holder Jr. (U.S. attorney general)
Proud owner of a “Top 5 Black Man Mustache: Living.” He is my hero. This campaign is nothing with him and that long strip of black velcro above his top lip.

Bruce Hornsby (Musician)
Can’t imagine this list without him.

Dahntay Jones (Basketball player)
So far, both of the current NBA players are Dukies. Reggie Love, you may be gone, but the spirit of alumni nepotism that you created will never be forgotten.

Michael B. Jordan (Actor)
Pfew. I thought it was the other one for a second. Was about to warn FEMA Wardrobe.

John Kerry (Massachusetts senator)
This must be a mistake.

Alicia Keys (Musician)
Yes, Mrs. Megaupload has to help out in some way.

Amy Klobuchar (Minnesota senator)
One of my favorite senators. Reminds me of a character from a Judy Blume novel.

Brandon Knight (NBA player – Detroit Pistons)
He was born in 1991. NO.

Mila Kunis (Actress)
Get her in the cabinet.

Courtney Kurland (President)
I don’t know who you are and maybe that is my fault, but I am just going to assume that you are not as important as your invite warrants, so no.

Lilly Ledbetter
There’s a famous case named after her. I respect that. I hope Brown and Board are also being invited.

John Legend (Musician)
If he brings the lady.

John Leguizamo (Actor, comedian)
There isn’t a lady that warrants this.

Eva Longoria (Actress)
No. Switch her out for Tony Parker.

Mario Lopez (Actor, TV host)
Surprisingly, I like this call.

Jimmy Lynn (Sports consultant)
Sure, Why not.

Maura Mandt (Producer)
Sure, why not.

Enrique ‘Ricky’ Martin (Musician)
Sure, why not.

Alyssa Mastromonaco (Deputy chief of staff for operations)
Sure, why not.

Jason McCall (President, McCall and Associates)
Another one of these companies. So upset.

Tom McMillen (Homeland Security Capital Corporation)
Seems like a bully. Get. Him. Involved.

Jim Messina (Campaign manager)
Also, please cool it out with the emails. You got my vote man, chill.

Chrisette Michele (Musician)
Yes, and I hope she has a sing-off with Lea Michele.

Lea Michele (Actress-Glee)
Yes, and I hope she loses a sing-off with Chrisette Michele and is fired.

Bette Midler (Singer, actress)
No, but I hope she replaces Ben Folds on The Sing-Off.

Adewale Ogunleye (NFL player)
I mean, maybe in 2008 I understand this. Maybe.

Eric Christian Olsen (Actor)
I was waiting for a CBS actor. Didn’t think it would be someone from NCIS: LA, was thinking more Without a Trace.

Kal Penn (Actor)
Somehow, this guy is a White House staple. I don’t know how he did it, but he did it, and it’s awesome.

Penn Masala (A capella group)
Oh really, Obama? Penn Masala and not the Sing-Off’s own Dartmouth Aires. This might cost you the election, Barry.

Richard Plepler (Co-president of HBO)
No. They cancelled How To Make It In America.

Alfreda Robinson (Associate dean)
Don’t know you, but I love the name Alfreda. So yes.

Peter Rouse (Counselor to the president)
I guess.

Kenneth Salazar (Secretary of the interior)
Only if he wears a bolo tie.

Kathleen Sebelius (Secretary of health and human services)
Only if she wears a bolo tie.

Eric Shinseki (Secretary of Veterans Affairs)
Only if he wears a bolo tie.

David Simas (Obama adviser)
Doesn’t own a bolo tie. So no.

Bobby Rae Simmons aka B.o.B. (Rapper)
No, Barack, no. Switch him out for Young Jeezy and finally admit that he got you elected the first go-round. Just admit it, Barack. It wasn’t you. It was Young. End of story.

Reggie Smith (President, Chicago chapter of NFL Players Association)
I mentioned earlier that Obama wanted NBA season tickets in every stadium. This also applies to football. Dude is trying to HANG OUT once he’s not the president.

Julianna Smoot (Deputy campaign manager)
I also have email-beef with you. But yes.

Hilda Solis (Secretary of labor)
Yes. Hilda is the bomb.

Esperanza Spalding (Musician)
Has to be invited to everything, I’ve decided.

Gwen Stefani (Musician)
No. I haven’t missed you, lady.

The Band Perry (Band)
No.

The Roots (Band)
Only if they become the Obama house band for the next 10 months.

Train (Band)
Only if they refuse any offers to become to Obama house band.

Vampire Weekend (Band)
Absolutely. Bring the girl from the Contra cover to all events.

Steven VanRoekel (Chief information officer of the U.S.)
No.

Buffy Wicks (Operation Vote Director)
Sure. Why not.

Wilco
No. Switch them out for a better Chicago-based band.

Tristan Wilds
Yes. First Wallace and now Michael. The Wire collective is the most important part of this list.

Rita Williams
No. Wasn’t on The Wire.

Kaye Wilson
Sasha and Malia’s godmother. The only reason I say yes, because she wasn’t on The Wire.

Oprah Winfrey
Blue Ivy Carter’s godmother. The only reason I say yes, because she wasn’t on The Wire.

To quote Grantland deputy editor Dan Fierman, “You are REALLY not going to get that job as the campaign’s official blogger now, Rem.”