The Replacements’ Quasi-Reunion Raises Over $100,000 for Slim Dunlap’s Medical Care 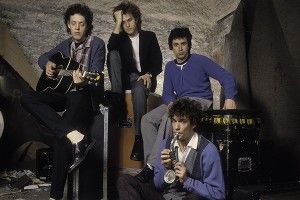 The traditional template of the modern rock reunion is well-established, and it goes a little something like this: Beloved band puts aside years of deep, embittered, eye-scratching acrimony long enough to string together live gigs; beloved band takes oodles of money from legions of irrational superfans, who fell hard while they were gone and never got to see them play the first time around; band buys Porsches, band sends kids to fancy boarding schools in Switzerland; band gets long overdue dental care. The Replacements — the infamously self-destructive Minneapolis rockers behind some of the most perfect heartache songs of all time — could have opted in for that kind of thing at pretty much any point over the last decade. The reunion we’ve just gotten, though, is a bit more modest, and a bit more heartwarming.

In the fall, frontman Paul Westerberg and bassist Tommy Stinson got together in Minneapolis and recorded a five-track covers EP. Missing was original drummer Chris Mars, who opted not to take part, and original guitarist Bob Stinson, who died in 1995 at the age of 35. The motivation for the reunion was the stroke suffered by guitarist Slim Dunlap, Bob Stinson’s replacement in The Replacements, in February of 2012. The idea was to auction off 250 vinyl copies of the EP — titled Songs For Slim — with all benefits going to Dunlap. As planned, the auction went off earlier this year, and the results were pretty great.

The Daily Swarm points our attention to the official Songs For Slim site, which explains, “Insurance does not pay for long term care and the general prognosis for Slim is that he will likely need around-the-clock care for the rest of his life. He needs our help.” And now the heartening news: “[T]he auction of a limited edition run of 250 numbered copies of a brand new, deluxe 10" vinyl EP package by The Replacements, their first new release in over 20 years — went off with a BANG, raising $105,743.42 for Slim and his family! This staggering amount far exceeded any expectations; the Dunlaps, the Songs For Slim team and New West Records are deeply humbled by this overwhelming response of love and support. Nearly 6,500 individual bids were made and almost 4,000 people participated in the 10-day auction. Copy #1 went for an astounding $10,000 to a Replacements über fan in Brooklyn.” Next up: more covers of Slim songs — by folks like Steve Earle, Craig Finn, and Lucinda Williams — and more auction money going to Dunlap’s medical care.

So what does this mean for the future of The Replacements? Well, at least when the initial EP was announced, it sounded like there was a glimmer of hope. In inimitable dramatic fashion, Westerberg told Rolling Stone that the reunion was something Dunlap “really wanted to happen. ‘You guys get together,’ he said in a whisper. ‘Go play a song.'” And so: “It’s possible. After playing with Tommy … I was thinking, ‘All right, let’s crank it up and knock out a record like this.’ I’m closer to it now than I was two years ago, let’s say that.” Let’s hope, $100,000 for Slim later, he’s even closer.

Filed Under: Music News, The Replacements