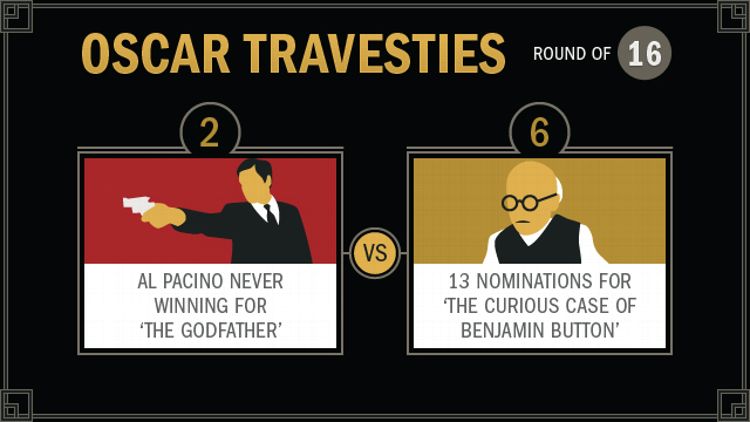 Like I always say when I’m asked to do one of these things:

Billy Crystal in blackface vs. every dance number, ever

I’d love to know how this would have come out if it had just been a more generalized “Billy Crystal” vs. the collected movie-mime whimsies of Debbie Allen et al — i.e., were people responding negatively to Billy Crystal doing something racist, or just the ugly fact of Billy Crystal’s existence? — but, regardless, burnt cork walks away with it. Other than that, though, pretty weak showing overall for non-awards-based Oscar travesties. I’m guessing this is partly a matter of demographics, and that a lot of you voted for Social Network because you don’t remember Benigni’s tomfoolery, or Benigni, or 1998. Have fun burying me and running the world soon, young people! I have nothing to say about the Lowe/Scorsese matchup, because duh, obviously — but I just watched the Snow White thing again, probably for the first time since 1989, and I kind of love it. It looks like they made it up between dress rehearsal and air.

Massive unsurprising sympathy-vote for Bigelow here, so I’ll just point out that American Beauty is a facile, self-satisfied look-at-the-repressed-suburbanites book report of a movie and there’s a reason its central image is a bag with wind in it. 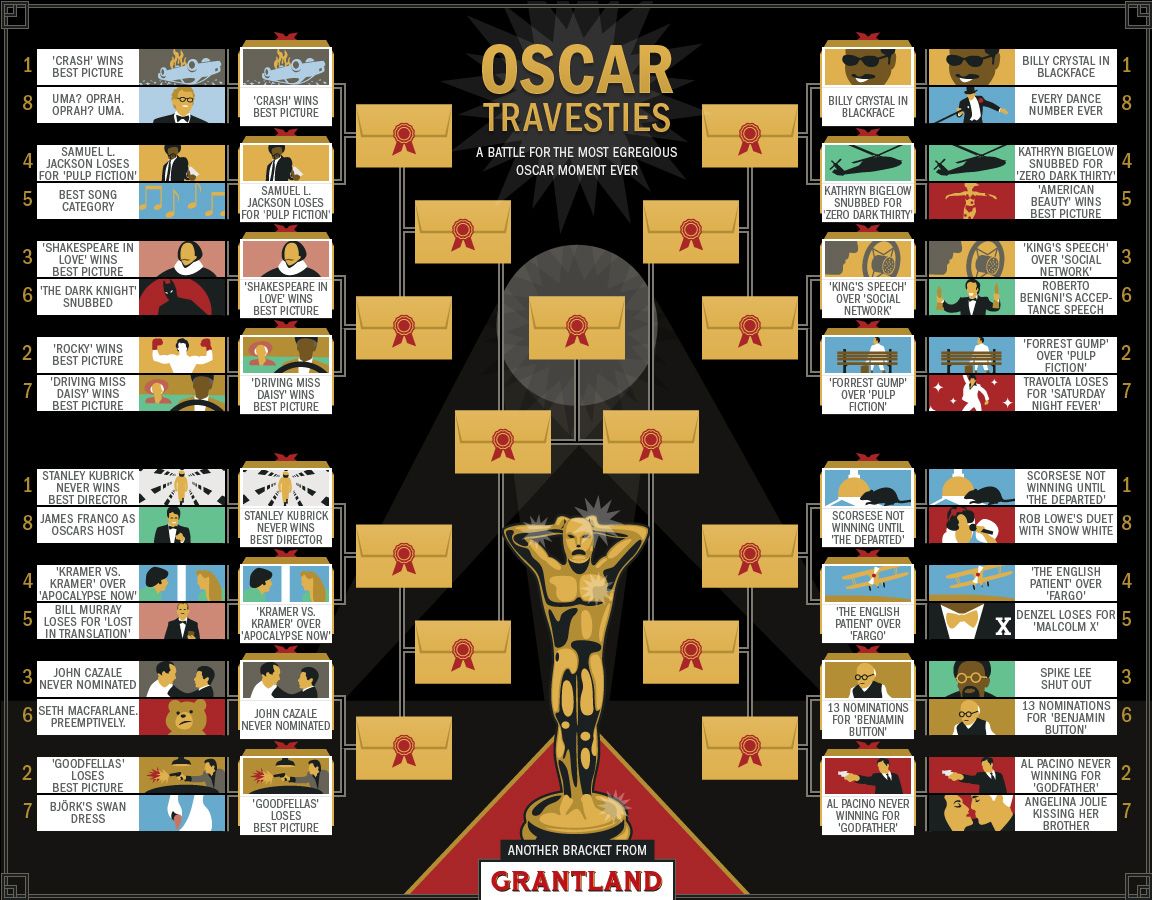 So far the trend seems to be running against injustices done to individual artists/filmmakers in favor of injustices done to films. Hence the outcome here, in which you decided that Travolta being robbed of an Oscar wasn’t as egregious as Travolta’s comeback movie losing a culture-warrish face-off with Gump. I’d like to point out that one of the things I dislike most about this bracket is that in order to vote for Pulp Fiction, I also have to vote for the cloying and overrated Shawshank, which hurts my conscience. The showdown I’m really interested in, though, is between Pulp and Social Network, which should be a barnburner of an Xers-vs.-millenials battle, even if the fact that it’s happening on Facebook means Social Network kind of has home-field advantage.

Admittedly, this is an oddly framed matchup. We have mentioned that we figured these out by yelling at each other, right? That was not hyperbole. We literally yelled. It was weird. Feelings were hurt, childhoods were regressed-to. Somehow, after all the tears were wiped away and the crudely fashioned office-supply shivs stowed, we ended up with this apple/orange-y “should have” vs. “shouldn’t have” argument pitting the relative Oscar-worthiness of a great director’s whole career against the possibly excessive nomination haul of a single movie. It’s kind of like we’ve asked you if your favorite dessert is (A) ice cream or (B) “not the steam engine.” (Obviously the less-nonsensical, fairer-to-you-the-voter question would be something like “Spike never nominated” vs. “Kubrick never winning,” which is more of a historical argument about the relative worth of two major non-Oscar-winning filmmakers.)

Anyway: Between Spike Lee never getting a Best Director nomination, ever, and David Fincher’s The Curious Case of Benjamin Button receving 13 nominations in various categories, you voted pretty decisively that the overpraising of Button was the greater injustice. Which is, I’m sorry, totally insane — especially when you consider that Button only actually won three of those awards, for art direction, makeup, and visual effects, a.k.a the only awards it should have been in the running for. You’re basically saying you don’t like any Spike Lee movie as much as you dislike Benjamin Button. Or that Benjamin Button deserved to be punished for being a dumb movie more than Spike Lee deserved to have at least made the Academy’s short list for Do The Right Thing or Malcolm X or (if you ask me, and maybe like 18 other people) The 25th Hour. You people must really hate the Knicks.

The English Patient wins Best Picture over Fargo vs. Denzel Washington (for Malcolm X) loses to Al Pacino (for Scent of a Woman)

Angelina Jolie kissing her brother vs. Al Pacino not winning for The Godfather

As more than a few people pointed out in the comments, these two matchups are essentially connected. Pacino was nominated for Best Supporting Actor for The Godfather in 1973 and lost to Joel Grey in Cabaret. And while in ’73 he undoubtedly lost because he was sharing Godfather votes with James Caan and Robert Duvall for the same movie, when he was nominated for Best Actor in 1975 for Godfather Part II he lost to Art Carney for Harry & Tonto — which is arguably the Godfather of old-man-with-a-kitty-cat movies, but still, come on. So the Oscar he got for basically doing the big-headed bar mitzvah–caricature version of “AL PACINO!” in Scent of a Woman is a pretty obvious make-good. But you disagreed with the idea that Pacino taking it away from Denzel was worse than The English Patient beating out Fargo. Again, this ends up as an individual-achievement vs. relative-worth-of-movies argument; I find Scent of a Woman kind of unbearable but I’m with Elaine Benes on The English Patient: Fargo was robbed, Jerry Maguire was robbed, Secrets and Lies was robbed, Sack Lunch was robbed.

Snap picks for Round 3: Crash over Sam Jackson, but it’ll be close. The creepy racial politics of Driving Miss Daisy over the creepy Oscar politics of Shakespeare in Love. Kubrick over Kramer on a massive nerd-vote groundswell; modern-classic Goodfellas over cult-classic Cazale.

Afternoon Links: Get Psyched to Watch The Notebook This Valentine's Day With This New, Improved Trailer

The Replacements' Quasi-Reunion Raises Over $100,000 for Slim Dunlap's Medical Care