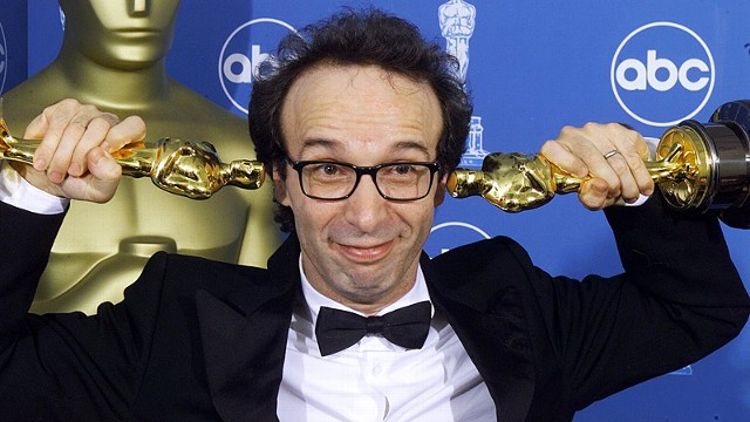 Roberto Benigni’s pair of over-caffeinated acceptance speeches from 1999 didn’t survive the first round of Grantland’s Oscar Travesty bracket. It lost to The King’s Speech’s stealing what the cool, the young, the Fincher-besotted believe was The Social Network’s best picture Oscar. It is the greater travesty since Benigni’s wins for foreign-language film and actor constitute no conventional travesty.

What exactly did he really do, anyway? Benigni wrote, directed, and starred in a film that Hollywood seemed to like. The movie, Life Is Beautiful, is a comedy in which an Italian family winds up in a World War II Nazi concentration camp, and the father concocts a parallel universe of comedy and fun to shield his son from the abounding horrors. The moral objections to the movie make sense — for one thing, it is predicated on a sort of Holocaust denial. But the film’s tonal ingenuity resides in the deftly crafted necessity for that denial. We know what Benigni’s up to. He recalibrates his famous clown persona to fit a story about altruism and doom. The game he constructs isn’t for the audience. The second half of Life Is Beautiful asks us to watch two ways at the same time: as a desperate parent and as an innocent child. Having to apply that double vision is what breaks your heart.

The Academy has a famous weakness for movies that depict a walk down one dark Holocaust boulevard or another — Judgment at Nuremberg; Cabaret; Music Box; Enemies, A Love Story; Schindler’s List; The Pianist; The Reader. Benigni’s was something Hollywood rarely sees: a tragicomedy. (Paul Mazursky’s Enemies more than qualifies.) With Miramax as the film’s distributor, its eight Oscar nominations would seem to be another Harvey Weinstein triumph. But what everybody remembers about that year’s Oscars race is his shrewdly manufactured best-picture win for Shakespeare in Love over Life Is Beautiful, Elizabeth, The Thin Red Line, and the presumed winner, Steven Spielberg’s Saving Private Ryan. Shakespeare over Spielberg has gone three rounds in the travesty bracket.

As travesties go, it’s minor. But it has longer legs than the one Benigni allegedly committed. Some people might remember his antics as buffoonery. But I remember an actor who electrified the night. When he won the foreign-language Oscar, Benigni freaked out. He kicked up his feet and proceeded to forgo the convenience of having an aisle seat in favor of walking atop the armrests and seat backs of the chairs between the stage and where he sat. Along the way, Spielberg’s outstretched arms provided him physical support. You could feel joy in that room. The world’s great living Italian movie star, Sophia Loren, presented him with the award, and she primed the pump when she opened the envelope and shouted, “Roberto!”

By the time he got to the stage and gave Loren an enormous hug (he was the first actor to win in a non-English part since she did it in 1962), you got a chill, and the chill has to do with the happiness you feel watching someone not care that he might be embarrassing himself. Benigni spoke in heavily Italianate English that pretended to be imperfect but made total sense (“I would like to thank my parents,” he said. “They gave me the biggest gift of poverty”), while Loren stood off to the side, overcome with joy.

The Best Actor win was the shock (it seemed like it might be Nick Nolte’s for Affliction; James Coburn won the supporting actor Oscar earlier for playing Nolte’s nightmare of a father). But Benigni was slightly calmer for trophy number two. (This time he used the aisle.) When he got to the stage, he feigned another language barrier: “This is a terrible mistake because I used up all my English!” Put an “a” between most of the syllables, and you get the full effect.

The complaints about the movie’s naive incapacity for seriousness in the face of an event that should be taken seriously carried over, absurdly, to a different event that people think should be taken seriously. His crime wasn’t winning. It was winning like a fool. Benigni’s big nervous laughs (“Uh-oh-oh-ho-ho!”), the way he kept raising his arms in salute of the crowd, the deep bows he took: It seemed like a parody of a victorious Italian, like a Saturday Night Live impersonation had won two Oscars. But America was simply being introduced to a persona — Charlie Chaplin and Peter Sellers crossed with a bag of espresso — that was already famous almost everywhere else. It felt like Benigni would come to Hollywood after that, that he was ready to conquer America, too. But it never came to pass. He’s directed two movies since then — one was a bomb (2002’s Pinocchio with him in the title role), the other, a romantic comedy called The Tiger and the Snow, was barely released — and toured the world with a popular stage show about Dante. The real travesty is that he’s never fully recovered from being so much of himself that night.