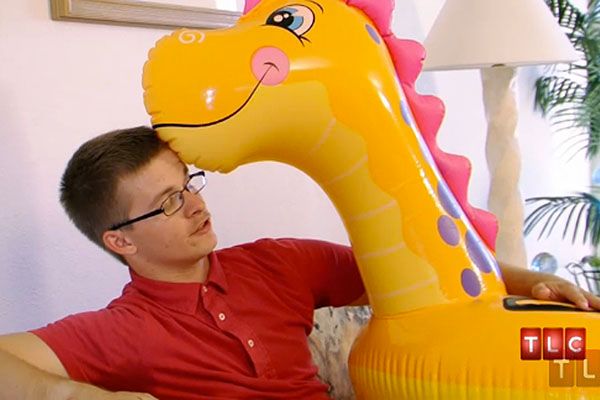 Every week, television documentaries present us with so many unusual people, with so many strange and/or disturbing problems, you might find it hard to keep up with all of them. That’s where I come in! Here’s an unflinching look back at TV’s Week in Freak Shows. [Editor’s note: This week, Tara presented us with four equally colorful characters featured on My Strange Addiction, and asked us to help her choose which one to highlight in her column this week. They were all so good, we decided to use them all! Welcome back, My Strange Addiction!]

Why Are We Watching Him? He is “in a relationship with 15 inflatable animals.”

How Did He Get Here? His mother wasn’t there for him when he was a kid, so he prefers the company of inflatable pool toys.

What’s the Grossest Thing We See? Though Mark describes his relationship with all his inflatables as “intimate,” Lila the Dragon is first among equals. As Mark puts it, she’s “like a wife”: “If I could marry Lila, I would.” However, the fact that he specifies that he doesn’t have sex with Lila — “We keep our relationship clean” — forces the viewer to wonder exactly what he gets up to with the shark, the dolphin, and the rest of the menagerie.

What Have We Learned? I never thought there could be a kind of fetishist that even a RealDoll owner could look down on. I was wrong.

Who Is This Now? Lisa.

Why Are We Watching Her? She’s addicted to eating cat hair.

How Did She Get Here? One of her cats wasn’t grooming herself after she had surgery, so Lisa decided to clean her the way a mother cat would do to her kittens. Now she’s eating up to three hairballs a day.

What’s the Grossest Thing We See? Lisa really does just straight up lick her cat, which is off-puttingly sexual and therefore unpleasant to watch. But then Lisa finally agrees to see a doctor, who shows her a photo of something that may be in her future: a mass of hair called a bezoar.

What Have We Learned? Not even bezoar risk is enough to stop Lisa from cat licking. After all, as she says, “Nobody lives forever.”

Who Is This Now? Trina and Mike.

Why Are We Watching Them? They have become addicted to coffee enemas, which they each self-administer four times a day.

How Did They Get Here? Trina was having stomach problems and “started to do research.” (Apparently this research did not involve the advice of a physician, since — as the show tells us — the health benefits of coffee enemas are unproven.) She hit upon coffee enemas as a solution and has been doing great ever since.

What’s the Grossest Thing We See? Seeing Trina and Mike separately lying on their bathroom floor giving themselves coffee enemas is bad enough — particularly if you happen to follow Trina on Twitter, since now you know that one of the ways she passes this time is by tweeting. But then Mike and Trina have to tell us their coffee preferences. “I like a finer, almost espresso grind,” says Mike. Trina: “I like it thicker because I feel like it’s not as messy.” And to be clear, neither of them drinks coffee. They are talking about how they take their coffee up their butts.

What Have We Learned? The “cleaned-out feeling” Trina loves so much can be achieved with a high-bran diet, and carries much less “perforation risk.”

Who Is This Now? Karmello.

Why Are We Watching Her? She is addicted to black-market butt injections.

How Did She Get Here? She … wanted her butt to get bigger? OK, there’s more to it than that: Her friend Vanity has an even bigger butt, and presumably introduced Karmello to her surgeon. And by that I mean “to the lady who bought some chemicals from the hardware store and set up shop in a crappy motel room.”

What’s the Grossest Thing We See? Even after Vanity — who’s kicked the black-market butt-injection habit — tells Karmello that the “doctor” who was injecting Karmello has been indicted (she doesn’t specify for what, but I’d imagine practicing “medicine” without a license and endangering her “patients'” health by filling them with rubber cement), Karmello isn’t convinced that her health is more important than her butt.

What Have We Learned? A real doctor tells Karmello that her butt X-ray shows irregularities, and that her injection habit could cause a clot in her lung and kill her instantly. So she stops! This show isn’t just a freak show; it actually helps people sometimes!

Who Is This Now? Jeff Flaningam.

Why Are We Watching Him? He’s facing the difficult challenge of finding a romantic prospect in his adopted home of Kansas.

How Did He Get Here? Because he is preparing for the total economic collapse of the United States, he’s bought a decommissioned missile silo he plans to turn into an underground bunker, and he’s looking for a woman — his partner in prepping and in life — who’s willing to live in it with him.

What’s the Grossest Thing We See? Jeff has evidently decided not to waste ANY time in finding his female counterpart, so he leads with his prepping on his date with Stephanie, peppering her with leading questions: “Are you outdoorsy? … Got any survival skills? … Do you think that the U.S. has the potential to financially collapse?” When, for some reason, she agrees to go on a second date with him, he directs her to drive to the middle of nowhere, and then meets her there to take her the rest of the way to the silo. But since he doesn’t trust her enough to know its exact location, he asks if he can blindfold her while he drives her there.

What Have We Learned? If a man you just met asks to take you blindfolded to his underground bunker, but he has a National Geographic Channel camera crew with him, he probably isn’t getting ready to murder you. Otherwise, please suggest just grabbing some Pinkberry instead.

Who Is This Now? Karen.

Why Are We Watching Her? A school bus aide reported Karen to the school authorities when her sons, Joseph and David, “had an odor to them that was overwhelming” because Karen wasn’t caring for them properly or providing them with a safe and functional home. CPS has given her 48 hours to clean her hoarded home or risk losing her two sons.

How Did She Get Here? Both of Karen’s husbands died suddenly, of natural causes, leaving her in shock, so her younger son David’s theory is that Karen started hoarding because she “has a hard time getting rid of old memories of our family.”

What’s the Grossest Thing We See? Karen’s dishwasher, which stopped working a very long time ago, is caked inside and out with thick black gunk and animal hair. But it’s somehow worse that the dryer — also long-broken and streaked with dirty — still has clothes in it that no one ever bothered to take out.

What Have We Learned? It is possible for a bare mattress to get so filthy that, even when it’s tipped on its side, hoard debris will stick to it.

Who Is This Now? Denisse.

Why Are We Watching Her? She’s telling the story of a potentially fatal snake bite she suffered.

How Did She Get Here? Denisse became fascinated by snake venom after a rattlesnake bit her ankle when she was running in the park. So, naturally, her next move was to get a job milking snakes at a venom lab! That’s where she was — working alone at the end of the day, of course — when another snake struck out at her from its cage and bit her on the hand.

What’s the Grossest Thing We See? Denisse gets an infection in her hand, which doctors tell her they can’t treat until it peaks. But since she fears losing the hand, she gives them permission to try a risky procedure on her instead: a fasciotomy. This entails leaving the wound open until the infection clears, with Denisse cleaning it herself. We see photos of Denisse’s right hand swelled up like a rubber glove full of pudding, with a long, angry gash along the back.

What Have We Learned? If you live in an apartment complex, you might have a neighbor who, like Denisse, has secretly accumulated 200 poisonous snakes for the purpose of starting her own venom lab someday. But don’t worry — even though Denisse has been bitten twice by wild snakes and once by one in a lab like the one she wants to start, her goal now is “absolutely, positively no accidents.”