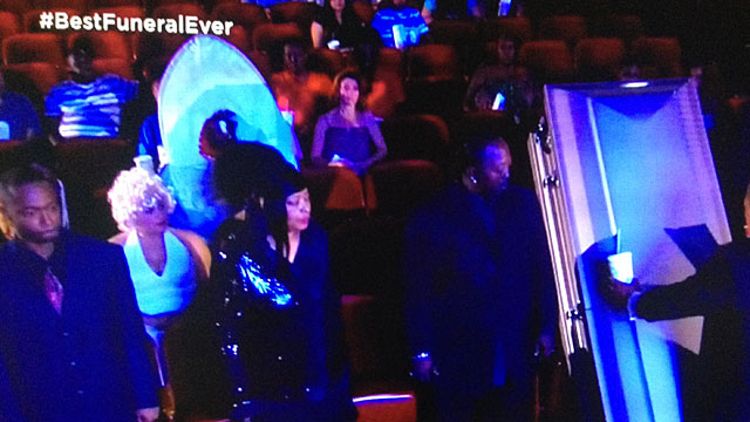 Who Is This Now? Johnnie Mae Watkins.

Why Are We Watching Her? She’s the “guest of honor” at a unique funeral.

How Did She Get Here? When she passed away, her survivors thought the best way to send her off would be with a lavish theme funeral from Dallas’s Golden Gate Funeral Home.

What’s the Grossest Thing We See? Golden Gate’s funeral planners seize on Johnnie Mae’s children’s comment that she loved movies (which seems like kind of a generic interest to me, but anyway) and suggest a funeral in the style of a Hollywood award show, complete with “celebrity impersonators” (staff members doing extremely bad impressions). The climax of the event comes when Johnnie Mae’s mourners AND JOHNNIE MAE HERSELF IN HER CASKET go to see a movie — a regular screening, it seems, complete with regular moviegoers who have no idea what is going on — which requires Johnnie Mae’s pallbearers to process through the theater, followed by the impersonators, including a person in a silly-looking Halloween shark costume.

What Have We Learned? Johnnie Mae’s survivors would know better than I whether she liked movies more than she liked dignity.

Who Is This Now? Bret and Shane Maggio.

Why Are We Watching Them? They’re showing us the preparations they’re making for when U.S. society collapses and lawlessness ensues.

How Did They Get Here? Apparently, they’re fourth-generation preppers, though specifically what their forebears were preparing for, we never find out. Something that was socially acceptable among Utahans decades ago but that probably doesn’t seem so acceptable today, maybe? You can use your own imagination as to what that might be — and you have to, because, like I said, the show doesn’t say.

What’s the Grossest Thing We See? The Maggios have stockpiled so much food that they’re constantly throwing out what they haven’t used, which is pretty appalling waste in a country where 49 million people live in food-insecure households. But what’s worse is watching Shane, in his ghillie suit, shooting a target from his sniper tower and imagining what it will be like if any of his neighbors come to the property looking for food or water after he and Shane (and the rest of their family) survive the apocalypse with so many supplies that they’re currently having to discard a lot of them. Because those neighbors will end up dead, apparently.

What Have We Learned? Preppers are antisocial monsters? Ha-ha, just kidding: We already knew that.

Who Is This Now? Susan.

Why Are We Watching Her? She’s been ordered by the town where she lives to clean out her house and bring it up to code, or risk having it condemned.

How Did She Get Here? Susan experienced the deaths of her husband, grandchild, and a close friend within a six-month span, and she comforted herself by shopping.

What’s the Grossest Thing We See? Since the time Susan left the house she had formerly shared with her husband (which she has hoarded to dangerous instability), it’s been taken over by rats, who have crawled and apparently defecated everywhere. At one point, as the camera pans through the kitchen getting B-roll of the situation, it pauses on the toaster, out of which … a rat pops its head. If I’m being honest, it’s both the grossest thing we see, and the most adorable.

What Have We Learned? Some rats look like cute, Disney-ready mice, and even the cute ones are disease carriers.

Q&A: Inside Llewyn Davis and Oldboy's Max Casella on the Coens, Spike Lee, Woody Allen, and Surviving The Sopranos and Child Acting