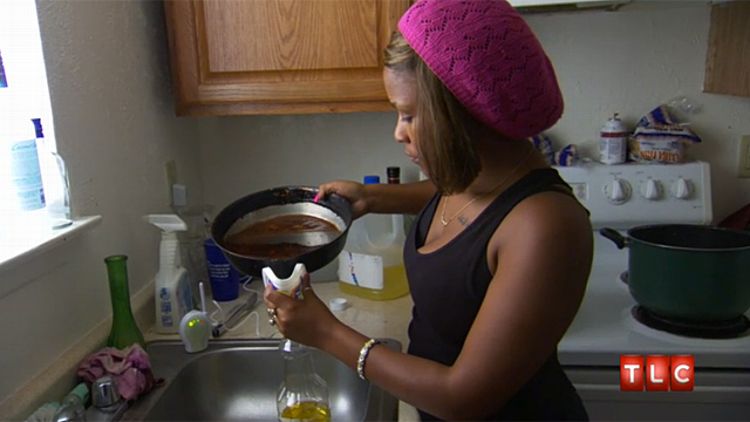 Who Is This Now? Stephanie.

Why Are We Watching Her? She is astonishingly frugal.

How Did She Get Here? We never find out what made her so cheap in the first place, but based on the delight she takes in depriving her boyfriend Patrick of life’s simple pleasures (e.g., using more than one lightbulb in the apartment they share), it seems like she’s staying cheap, in large part, out of spite.

What’s the Grossest Thing We See? It’s pretty gross when Stephanie proudly says she reuses her “boiling water” (for cooking) over and over again — and when a close-up shot of said water appears on camera and we can see how murky it is. But then … oh God. Patrick invites friends over to watch a football game, and though Stephanie doesn’t want to spend her money feeding them, she makes a lasagna. And to supplement the ground beef she’s willing to spend money on, she goes to the butcher, buys $3 worth of 100 percent beef fat, cooks it up into a gluey white mass that looks like sticky rice, and mixes it up with the legitimate meat. THEN, so as not to waste money on electricity, she “bakes” the lasagna in her dishwasher. While washing dishes.

What Have We Learned? According to one of Stephanie’s guests, if you cook a lasagna in a dishwasher, it will taste like water.

Who Is This Now? Greg.

Why Are We Watching Him? He’s showing off the ways he intends to ride out the apocalypse while the rest of us are prey for marauders.

How Did He Get Here? He got into prepping due to fears of chaos that will follow an economic collapse he believes is imminent.

What’s the Grossest Thing We See? The crown jewel of Greg’s prep is a tree house he built on his bug-out property, which he’s wrapped in reflective material so that it blends in with the surrounding foliage, such that you can’t really see it unless you’re really looking; I hate to admit it, but this is actually pretty cool. Unfortunately, Greg has forgotten or ignored that his wife, Marcia, is so afraid of heights that the mere idea of climbing up to the tree house makes her sob in terror.

What Have We Learned? Marcia’s going to have a pretty bad time in the apocalypse. Too bad for her.

Who Is This Now? Lynn.

Why Are We Watching Her? She’s trying to sort out her life with the help of cleaning and organizing experts.

How Did She Get Here? She and her boyfriend Kyle have hoarded their home past the point of livability and are at risk of losing it due to unpaid taxes and utility bills. They need to clean out and improve the house so they can rent out an adjoining apartment for the income.

What’s the Grossest Thing We See? Kyle’s daughters inform us that the only reason Kyle is still with Lynn is that her disability checks are the sole income he has any access to, which is sad for them both, particularly as he is now totally contemptuous of her, calling her “mushmouth” because understanding her speech is a challenge since her dentures were lost in the hoard. SURELY YOU KNOW WHERE THIS IS GOING: During the cleanup, Kyle’s daughter Darla finds Lynn’s dentures under a literal pile of trash, and when she returns them, Lynn pops them right into her face without, you know, cleaning them.

What Have We Learned? When the show’s cameras return to check in on Lynn and Kyle after the successful cleanup, she’s no longer wearing her dentures, so either dentures are remarkably easy to misplace, or Lynn has long since adapted to tooth-free living.